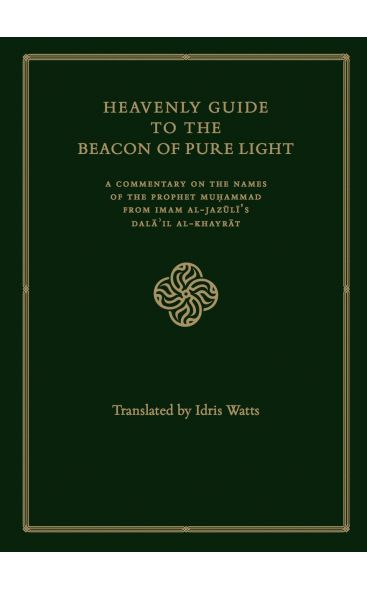 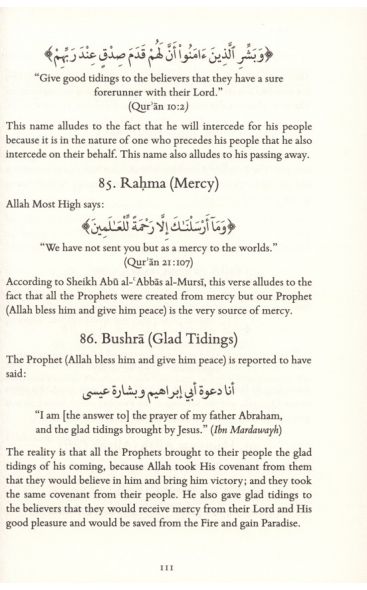 Heavenly Guide to the Beacon of Pure Light

The Dalaʾil al-Khayrāt has been a source of light for the Muslim community ever since its composition in the late 9th/15th century by Imam al-Jazuli, and it is probably the most oft-recited compilation of ṣalwat in the Muslim world.

The Dalaʾil al-Khayrāt has been a source of light for the Muslim community ever since its composition in the late 9th/15th century by Imam al-Jazuli, and it is probably the most oft-recited compilation of ṣalwat in the Muslim world; it also contains 201 Names of the Prophet (Allah bless him and give him peace), according to the collection of Abū ʿImran al-Zannati al-Fasi. These alongside the Dalaʾil itself are recited in many mosques and zawiyas (Sufi meeting-places) in Fes, Morocco, where the translator lived for over seven years.

Idris Watts brings together in this work, the introduction of the Dalāʾil al-Khayrāt and the Names as it’s recited in Fes today, directed by the head of the muqaddams, Ḥājj Ismāʿīl al-Filālī, who inherited the role from his father, one in a chain of narrators that goes back through the men of the Jazūlī Order; including the full Arabic text, transliteration and a translation. He also directed an audio-recording of the text in the Fes Style which accompanies the book.

In Part Two of the book he has provided, for the first time in the English Language, a short-commentary on the Names of the Prophet (Allah bless him and give him peace) bringing together a wealth of knowledge and benefit from a number of Arabic sources amongst them, Muḥammad al-Mahdī al-Fāsī’s Maṭāliʿ al-masarrāt bi-jalāʾ Dalāʾil al-khayrāt; Muḥammad al-Zarqānī’s Sharḥ al-Zarqānī ʿalā al-Mawāhib al-ladunniyya and Aḥmad al-Khafājī’s Nasīm al-riyāḍ fī sharḥ Shifā’ al-Qāḍī ʿIyāḍ. This will give the English reader a taste of what the traditional scholars have written about his Names and give greater meaning to the recitals of the Names.

Muhammed Idris Watts, born and raised in Kent, Muhammad Idris Watts accepted Islam in 1998 in the first year of his Arabic Language Degree at the University of Leeds. In the second year of the degree programme, he set off to the ancient city of Fez, Morocco to further his Arabic Language studies. During this period he attended circles of knowledge and zawiyahs around Fez. He also sat with many prestigious singers of Fez such as Sidi Muhammad Bennis.Shaykh Idris graduated in 2002 from the University with First Class Honours and also received an award of excellence for his language skills.

He moved back to Fez to embark on an intensive period of study. He attended classes at the Qarawiyeen University in the Old City for the next four years studying with the likes of the adept grammarian Shaykh Abdel-Hayy al-’Amrāwī and many other teachers.

He studied classical texts including the Ajrumiyah, Lāmiyat al-Af’āl, Matn az-Zanjānī, Alfiyah in Grammar and Morphology, Ibn ‘Ashir, al-Akhdarī, Risālah of Ibn Abī Zayd and sections of the ‘Asimiyyah in Mālikī Fiqh, as well as Jawharat at-Tawhīd in Creed. He also had the opportunity of sitting with the students of the late Shaykh Makkī bin Kīrān, (may God bless his soul), who was a master of the ten variant recitations of the Qurān and studied Tajwīd and four of the variant recitations with them.

He returned to England in 2007, and is currently the full-time Resident Scholar at the Abu Zahra Foundation.