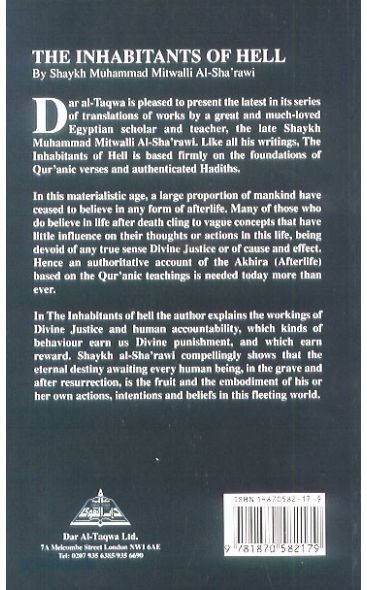 The Inhabitants of Hell

In this materialistic age, a large proportion of mankind have ceased to believe in any form of afterlife.

This book is latest in its series of translations of works by a great and much-loved Egyptian scholar and teacher, the late Shaykh Muhammad Mitwalli al-Sha'rawi. Like all his writings, this book is based firmly on the foundations of Qur'anic verses and authentic hadiths.

In this materialistic age, a large proportion of mankind has ceased to believe in any form of afterlife. Many of those who do believe in life after death cling to vague concepts that have little influence on their thoughts or actions in this life, being devoid of any true sense of Divine Justice or of cause and effect. Hence an authoritative account of the akhira (afterlife) based on Qur'anic teachings is needed today more than ever.

Here, the author explains the workings of Divine Justice and human accountability, which kinds of behavior earn us divine punishment, and which earn reward. Shaykh al-Sha'rawi compellingly shows that the eternal destiny awaiting every human being, in the grave and after the resurrection, is the fruit and the embodiment of his or her own actions, intentions, and beliefs in this fleeting world.

Muhammad Mutawalli Ash-Sha'raawi (April 5, 1911– June 17, 1998) was an Islamic scholar and former Egyptian minister of Endowments. He has been called one of Egypt's most popular and successful Islamic preachers, and "one of the most prominent symbols of popular Egyptian culture" in the decades of 1970, the 80s and 90s.

After graduating in 1940, he went on to earn his teaching certification in 1943. He later graduated from the religious institution of Tanta, before moving to another at Zagazig and then, finally, at Alexandria. In 1950, he moved to Saudi Arabia to work as professor of Sharee'ah in the University of Ummul-Quraa. However, in 1963, the diplomatic relations between Egypt and Saudi Arabia worsened and it became impossible for him to return to Arabia.

Instead, he took the position of manager of the office of the Imam of Al-Azhar, Hasan al Ma'amoon. Later, he travelled to Algeria as a head of the Al-Azhar expedition, where he stayed for seven years. During his stay in Algeria, the war of June 1967 occurred and Egypt suffered tremendous losses to Israel. Ironically, Ash-Sha'raawi 'praised' the defeat, saying "Egypt did not gain victory while the hands of communism surrounds them and their religion remains uncorrupted." Later, he did get to return to teach at the King Abdul Azeez University in Saudi Arabia.

Shaykh Abdalhaqq Bewley accepted Islam in 1968 and spent some years in Morocco studying the Deen. Since that time he has worked with Shaykh Dr. Abdalqadir al-Sufi on the establishment of Islam and Muslim communities, which has led to periods living and teaching in Nigeria, the US, Czechoslovakia, Germany, Spain, the Caribbean and the UK.

He is the author of Islam, its basic practices and beliefs, Zakat: raising a fallen pillar and a number of other works. In collaboration with his wife, the renowned translator Aisha Bewley, he has been responsible for The Noble Qur'an: a new rendering of its meanings in English, Al-Muwatta of Imam Malik and Muhammad, the Messenger of Allah (ash-Shifa) of Qadi Iyad.

Shaykh Abdalhaqq currently resides in Norwich where he is the Rector of the Muslim Faculty of Advanced Studies.