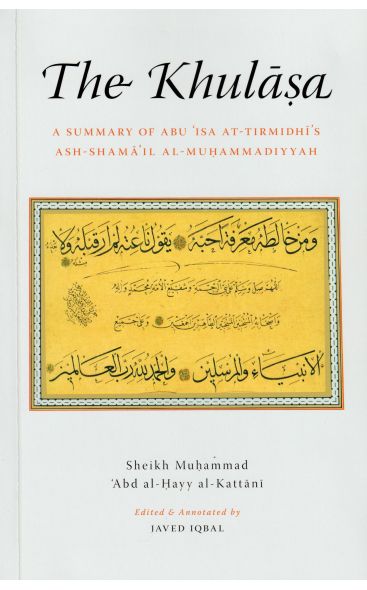 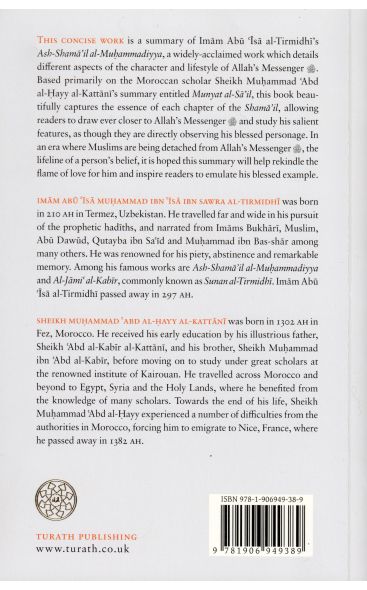 This concise work is a summary of Imam Abu Isa al-Tirmidhi's Ash-Shamail al-Muhammadiyya, a widely-acclaimed work which details different aspects of the character and lifestyle of Allah's Messenger (May Allah bless him and grant him peace).

This concise work is a summary of Imam Abu Isa al-Tirmidhi's Ash-Shamail al-Muhammadiyya, a widely-acclaimed work which details different aspects of the character and lifestyle of Allah's Messenger (May Allah bless him and grant him peace).

Based primarily on the Moroccan scholar Sheikh Muhammad Abd Hayy al-Kattani's summary entitled Munyat al-Saa'il, this book beautifully captures the essence of each chapter of , allowing readers to draw ever closer to  Messenger (May Allah bless him and grant him peace) and study his salient features, as though they are directly observing his blessed personage.

In an era where Muslims are being detached from  Messenger (May Allah bless him and grant him peace), the lifeline of a person's belief, it is hoped this summary will help rekindle the flame of love for him and inspire readers to emulate his blessed example.

Imam Abu Isa Muhammad ibn Isa ibn Sawra al-Tirmidhi was born in 210 ah in Termez, Uzbekistan. He  far and wide in his pursuit of the prophetic  and narrated  Imams al-Bukhari, Muslim, Abu Dawud, Qutayba ibn Sa'id and Muhammad ibn Bas- among many others. He was renowned for his piety, abstinence and remarkable memory. Among his famous works are Ash-Shama'il al-Muhammadiyya and Al-Jami' al-Kabir, commonly known as Sunan al-Tirmidhi. Imam Abu Isa al-Tirmidhi passed away in 297 AH.

He  across Morocco and beyond to Egypt, Syria and the Holy Lands, where he benefited from the knowledge of many scholars. Towards the end of his life, Sheikh Muhammad Abd al-Hayy experienced a number of difficulties from the authorities in Morocco, forcing him to emigrate to Nice, France, where he passed away in 1382 AH.

Aisha Abdurrahman Bewley, born 1948 in the United States. She holds a BA in French and MA in Near Eastern Languages from the University of California, Berkeley. She spent a year with a fellowship at the American University in Cairo and at the same time attended a seminar on Sufism and Islamic philosophy at Dar al-’Ulum. She is a student of Shaykh Abdalqadir  and also studied Ibn ‘Arabi with the late Sidi Fudul al- in Fes, Morocco.