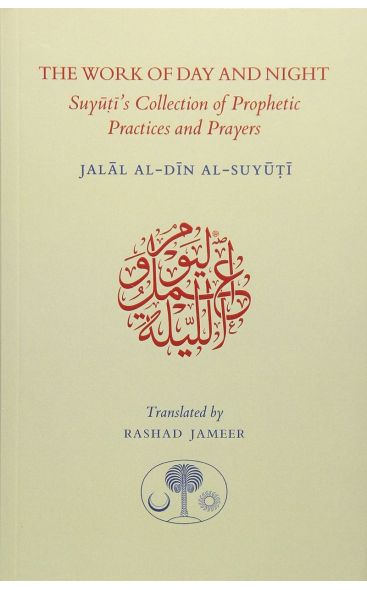 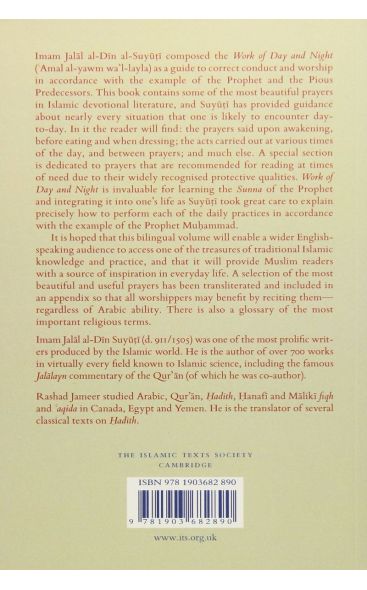 The Work of Day and Night: Suyuti's Collection of Prophetic Practices and Prayers

This book is a collection of the daily and nightly practices of the Prophet of Islam and includes instructions on how to follow the Prophet in everyday actions and supplications.

Imam Jalal al-Din al-Suyuti composed the Work of Day and Night ('Amal al-yawm wa'l-layla) as a guide to correct conduct and worship in accordance with the example of the Prophet and the Pious Predecessors. This book contains some of the most beautiful prayers in Islamic devotional literature, and Imam Suyuti has provided guidance about nearly every situation that one is likely to encounter day-to-day.

In it the reader will find:

A special section is dedicated to prayers that are recommended for reading at times of need due to their widely recognized protective qualities. Work of Day and Night is invaluable for learning the Sunna of the Prophet and integrating it into one's life as Suyuti took great care to explain precisely how to perform each of the daily practices in accordance with the example of the Prophet Muhammad.

It is hoped that this bilingual volume will enable a wider English-speaking audience to access one of the treasures of traditional Islamic knowledge and practice, and that it will provide Muslim readers with a source of inspiration in everyday life. A selection of the most beautiful and useful prayers has been transliterated and included in an appendix so that all worshipers may benefit by reciting them regardless of Arabic ability. There is also a glossary of the most important religious terms.

Imam Jalal al-Din al-Misri al-Suyuti al-Shafi`i al-Ash`ari, also known as Ibn al-Asyuti  (849-911AH /1445-1505), the mujtahid imam and renewer of the tenth Islamic century, foremost Hadith master, encyclopaedist, historian, and biographer and probably one of the most prolific of all Islamic writers. There are an enormous number of his essays and treatises preserved today.

A number of his writings concerned scientific topics or issues related to natural science and food and regimen, amongst other things From Asyut in Egypt, he was among the most renowned and prolific Muslim scholars of all time. He wrote more than 300 books, covering every aspect of the Islamic sciences. He memorized the Qur’an at the age of ‘eight, and then went on to study with more than 150 scholars. He traveled extensively in his quest for knowledge — to Damascus, Hijaz, Yemen, India, Morocco, and the lands south of Morocco, as well as in Egypt. Al-Suyuti devoted his life to learning, teaching and writing. He was noble, abstinent and self-sufficient, distancing himself from people of rank and power and living on what he earned by teaching. Major writings of al-Suyuti that remain widely used today include al-Itqan, on the Qur’anic sciences; and Tafsir al-Jalalayn, which he completed when only 22.

Rashad jameer studied Arabic, Qur'an, Hadith, Hanafi and Maliki fiqh and aqida in Canada, Egypt and Yemen. He is the translator of several classical texts on Hadith, and also teaches Islamic Studies at a number of mosques in Toronto, Canada. ​