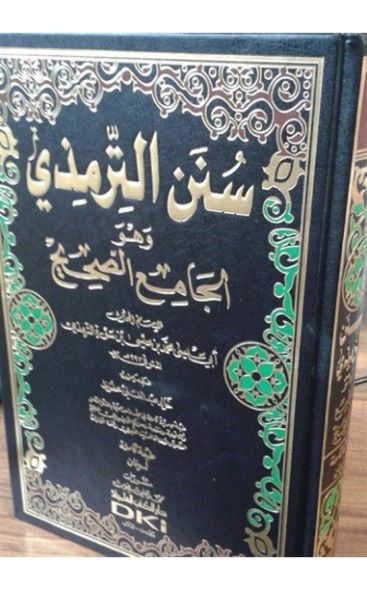 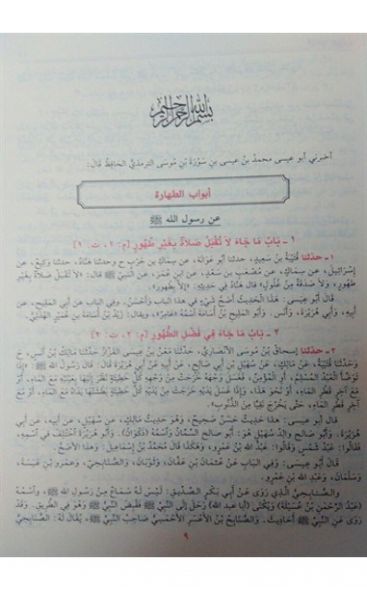 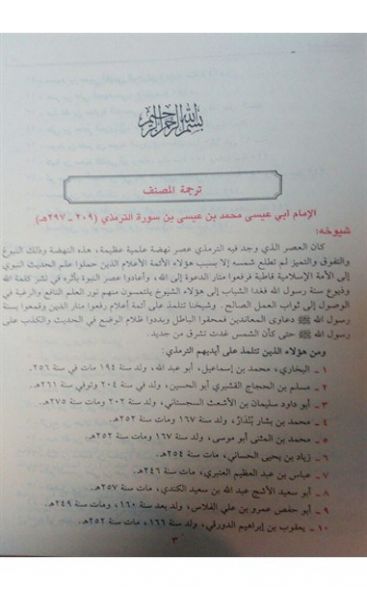 Sunan Al-Tirmidhi Wahuwa Al-Jami' Al-Sahih, is one of the of the six top compilations of hadith collections known in the Islamic world.

Sunan Al-Tirmidhi Wahuwa Al-Jami' Al-Sahih, is one of the of the six top compilations of hadith collections known in the Islamic world. Al-Hafiz Abu Al-Fall Al-Maqdisi said: 'I heard Al-Imam Abu Ismail `Abdullah bin Muhammad Al-Ansari in Harrah — when Abu `Eisa At-Tirmidhi and his book was mentioned before him — saying: `To me, his book is better than the book of Al-Bukhari and that of Muslim. Because only one who is an expert in knowledge can arrive at the benefit of the books of Al-Bukhari and Muslim, whereas in the case of the book of Abu `Eisa, every one of the people can reach its benefit.'

In Jami`Al-Usul, Ibn Al-Athir said: '(It) is the best of the books, having the most benefit, the best organization, with the least repetition. It contains what others do not contain; like mention of the different Madhhabs (views), angles of argument, and clarifying the circumstances of the Hadith being authentic, weak, Gharib (odd), as well as disparaging and endorsing remarks (regarding narrators).'

Adh-Dhahabi said: 'In Al-Jami' there is useful knowledge, abundant benefits, and a summary of the issues. It is one of the Usul of Islam, if not for the tarnish of the inauthentic Ahadith in it, some of which are fabricated — and most of that are about virtues.'

After Sunan Abi Dawood, Imam Abu 'Eisa At-Tirmidhi's Jami` (compilation) - better known as 'Sunan At-Timidi' is considered the most authentic among the Four Sunan. In fact, some scholars even considered Sunan At-Tirmidhi to be the best out of all of the Six Books, not based upon a criteria of authenticity, but rather because of how well organized it is, making it easy for the average person to find what he is looking for, and all of the additional areas of knowledge that the author has included, which are not found in the other titles among the Six.

For example, after citing the narrations of a chapter, he often explains the views of the famous A'imamah of Fiqh, like Ahmad, Ash-Shafi'i, Malik, and others. In this manner he makes clear the interpretations of these great scholars, and why they did or did not act upon this Hadith, or its like, making this collection an important Fiqh reference.

Similarly, if he mentioned a chapter about the prohibition or the command for something, he would include — if applicable — a chapter after that related to the exception or permission regarding those matters. His collection has the added distinguishing mark of containing many statements regarding narrators from the great scholars of Ahadith that he learned from, like Imam Ad-Darimi, whom he often cites from by saying: 'I asked 'Abdullah bin 'Abdur-Rahman about this...' Of course, the most famous of these is his teacher Imam Al-Bukhari, whom he often refers to as: 'I asked Muhammad' or 'I heard Muhammad bin Ismai'l saying...'
Often times, Imam At-Tirmidhi explains details about the name of a narrator that may be obscure in chains of narration he cited, as well as clarifying the names of Sahabah who are mentioned.

Imam At-Tirmidhii also explains any defects in the chains of narration he cited for the Hadith, and what his preference is in regard to the most correct version, in other words; is the real chain a connected chain, or is the genuine version that which does not have a connected chain. Imam At-Tirmidhi's collection also has another distinguishing characteristic among the remainder of the Four Sunan collections; that is his effort to explain the overall correctness and usefulness, in other words, the grade of each Hadath. This is something that occurs with less frequency in the other three of the Four Sunan. In most chapters, Imam At-Tirmidhi also explains if there are other narrations related to the topic, and from which of the Sahabah they are reported. Such topics — along with his book Al-'ilal Al-Kabir and his book Al- 'ilal As-Saghir — make his collection an important reference for the science of ilm Ar-Rijal, Ilm Ar-Riwayah and Al-Jarh wat-Ta'dil.

In summary of the benefit of Sunan At-Tirmidhi, Al-Qadi Ibn Al-`Arabi mentioned the famous collections of Ahadith and he said: 'And there is none among them like the book of Abu `Eisa...' And he said: 'In it are fourteen (categories) of knowledge, and that makes it easier and safer to act upon...'

He listed them as:
​
1. Chains of narration (Asnad);
2. Authenticity (Sahhah);
3. Weakness (Da`afa);
4. Multiple routes of transmission (Turuq);
5. Disparaging remarks regarding narrators (Jarh):
6. Endorsing remarks regarding narrators (Addal);
7. Names of narrators;
8. Kuuyah (surnames) of narrators:
9. Connected narrations (Wasal);
10. Disconnected narrations (Qata');
11. The clearest of what is to be acted upon;
12. What is abandoned of narrations:
13. Clarification of the differences of the scholars in rejecting and accepting narrations;
14. Mention of their differences in interpretation of the narrations.

By these, he indicated that this collection of Imam At-Tirmidhi includes each of these types of knowledge in it.

The original text of Sunan At-Timidhi has been widely published in the Islamic world, and a team of scholars has reviewed the famous publications and manuscripts in verification of the text for our publication.

There are slight discrepancies of variation in some of the manuscripts and published editions. Sometimes there is an additional word here or there, or one Hadith or chapter is cited earlier or later in sequence in one manuscript.
In cases of additional words or phrases found in one or few of the manuscripts and editions, the addition has been marked by square brackets [ ]. This method is visible in the English translation as well, and whenever it was deemed necessary to insert an explanatory term, then parenthesis ( ) were used for that purpose.

Lastly, all of the Ahddith in the text have been graded by the great research scholar Hafiz Zubair 'All Za'i.
We ask Allah to accept our good works in this endeavor, and to cause all of the readers to attain the best benefit from it.