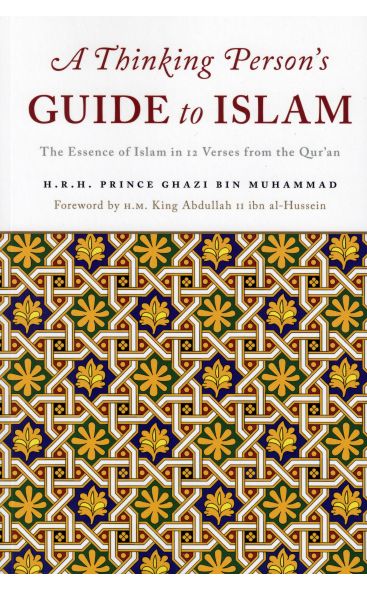 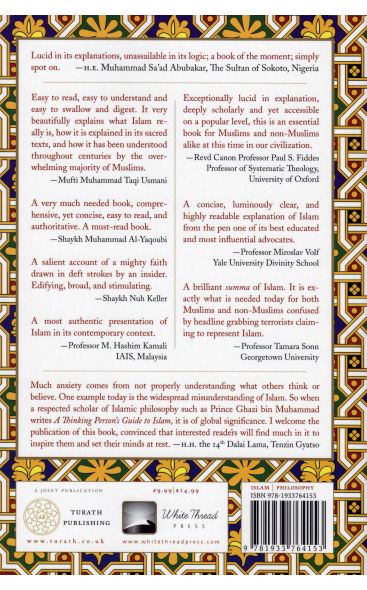 A Thinking Person’s Guide to Islam : The Essence of Islam in 12 Verses from the Qur’an

The world is at a crossroads today. A tiny minority of Muslims seems to be bent on hijacking the religion of Islam and bringing it into perpetual conflict with the rest of the world.

The world is at a crossroads today. A tiny minority of Muslims seems to be bent on hijacking the religion of Islam and bringing it into perpetual conflict with the rest of the world.

Because of their actions, very few non-Muslims understand the real difference between Islam as it has always been, and the distorted perversions of Islam today. This book is an attempt to positively say what Islam actually is—and always was—as well as what it is not.

He is a Professor of Islamic Philosophy and his book Love in the Holy Qur’an has been widely acclaimed, has gone into ten editions and has been translated into a number of languages. He also serves as Chief Advisor for Religious and Cultural Affairs to H.M. King Abdullah II ibn Al-Hussein of Jordan.

This title has been jointly published  Turath Publishing.

The hardcover includes a  annex on the Crisis of ISIS.

“Lucid in its explanations, unassailable in its logic; a book of the moment; simply spot on.” —H.E. Muhammad Sa’ad Abubakar, The Sultan of Sokoto, Nigeria

“Easy to read, easy to understand and easy to swallow and digest. It very beautifully explains what Islam really is, how it is explained in its sacred texts, and how it has been understood throughout centuries by the overwhelming majority of Muslims.” —Mufti Muhammad Taqi Usmani

“A very much needed book, comprehensive, yet concise, easy to read, and authoritative. A must-read book.” —Shaykh Muhammad Al-Yaqoubi

“A salient account of a mighty faith drawn in deft strokes by an insider. Edifying, broad, and stimulating.” —Shaykh Nuh Keller

“Much anxiety comes from not properly understanding what others think or believe. One example today is the widespread misunderstanding of Islam. So when a respected scholar of Islamic philosophy such as Prince Ghazi bin Muhammad writes A Thinking Person’s Guide to Islam, it is of global significance. I welcome the publication of this book, convinced that interested readers will find much in it to inspire them and set their minds at rest.” —H.H. the 14th Dalai Lama, Tenzin Gyatso

“A most authentic presentation of Islam in its contemporary context.” —Professor M. Hashim Kamali, IAIS, Malaysia

“Exceptionally lucid in explanation, deeply scholarly and yet accessible on a popular level, this is an essential book for Muslims and non-Muslims alike at this time in our civilization.” —Revd Canon Professor Paul S. Fiddes, Professor of Systematic Theology, University of Oxford

“A concise, luminously clear, and highly readable explanation of Islam from the pen one of its best educated and most influential advocates.” —Professor Miroslav Volf, Yale University Divinity School

“A brilliant summa of Islam. It is exactly what is needed today for both Muslims and non-Muslims confused by headline grabbing terrorists claiming to represent Islam.” —Professor Tamara Sonn, Georgetown University

“Profoundly rooted in the traditional wisdom of Islam yet also contends with the realities of today, not least because it is bold enough to tackle and name for what it is the perversion of the Muslim faith offered by the group known as Daesh/IS.” —Rev Dr Olav Fykse Tveit, General Secretary, World Council of Churches

“A witness of what I have called ‘robust moderation’; this witness confronts extremism with God’s love.” —Bishop Dr. Munib Yunan, President of the World Lutheran Federation