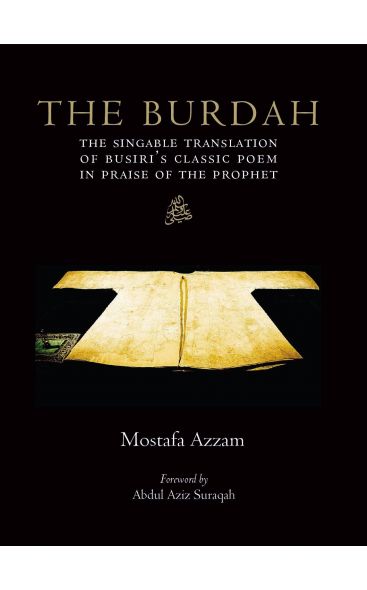 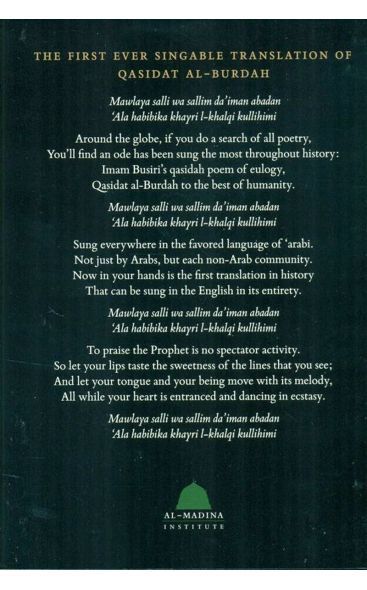 THE BURDAH : The singable translation of Busiri’s classic poem in praise of the Prophet

THE FIRST EVER SINGABLE TRANSLATION OF QASIDAT AL-BURDAH of Imam al-Busiri’s classic poem in praise of the Prophet Muhammad (PBUH).

Around the globe, if you do a search of all poetry,

You’ll find an ode has been sung the most throughout history:

Sung everywhere in the favored language of ‘arabi.

Not just by Arabs, but each non-Arab community.

Now in your hands is the first translation in history

That can be sung in the English in its entirety.

To praise the Prophet is no spectator activity.

So let your lips taste the sweetness of the lines that you see;

And let your tongue and your being move with its melody,

All while your heart is entranced and dancing in ecstasy.

Imam Al-Busiri (Abu 'Abdallāh Muhammad ibn Sa’íd ul-Busiri Ash Shadhili) (1211–1294) was a Sufi Egyptian poet, originally from Moroccan Sanhaji Berber descent belonging to the Shadhiliyya order. He lived in Egypt, where he wrote under the patronage of Ibn Hinna, the vizier. The most famous of these is the Qasida al-Burda (Poem of the Mantle).

It is entirely in praise of the Islamic prophet, Muhammad, who cured the poet of paralysis by appearing to him in a dream and wrapping him in a mantle. The poem has had a unique history (cf. I. Goldziher in Revue de l'histoire des religions, vol. xxxi. pp. 304 ff.). Even in the poet's lifetime it was regarded as sacred. Up to the present time its verses are used as amulets; it is employed in the lamentations for the dead; it has been frequently edited and made the basis for other poems, and new poems have been made by interpolating four or six lines after each line of the original.