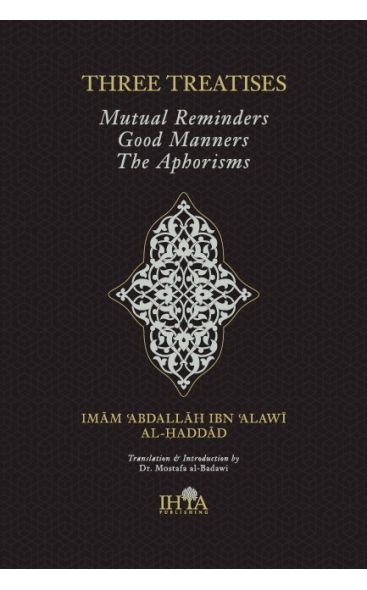 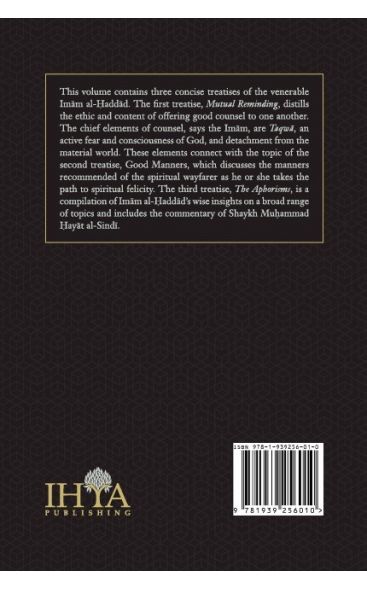 This volume contains three concise treatises of the venerable Imām al-Ḥaddād. The first treatise, Mutual Reminding, distills the ethic and content of offering good counsel to one another. The chief elements of counsel, says the Imām, are Taqwā, an active fear and consciousness of God, and detachment from the material world.

These elements connect with the topic of the second treatise, Good Manners, which discusses the manners recommended of the spiritual wayfarer as he or she takes the path to spiritual felicity. The third treatise, The Aphorisms, is a compilation of Imām al-Ḥaddād’s wise insights on a broad range of topics and includes the commentary of Shaykh Muḥammad Ḥayāt al-Sindī.

He lived at Tarim in the Hadramaut valley between Yemen and  and is widely held to have been the ‘renewer’ of the twelfth Islamic century. A direct descendant of the Prophet, his sanctity and direct experience of God are clearly reflected in his writings, which include several books, a collection of Sufi letters, and a volume of mystical poetry. He spent most of his life in Kenya and Saudi Arabia where he taught Islamic jurisprudence and classical Sufism according to the order (tariqa) of the Ba'Alawi .

Dr. Mostafa al-Badawi is a consultant Psychiatrist and member of the Royal College of Psychiatrists. He studied under many shaykhs, foremost among whom is the late Habib Ahmad Mashur al-Haddad.

Dr. Badawi is also one of the leading contemporary translators of Islamic books from Arabic to English, and his work includes Book of Assistance, The Lives of Man, Key to the Garden, and Degrees of the Soul