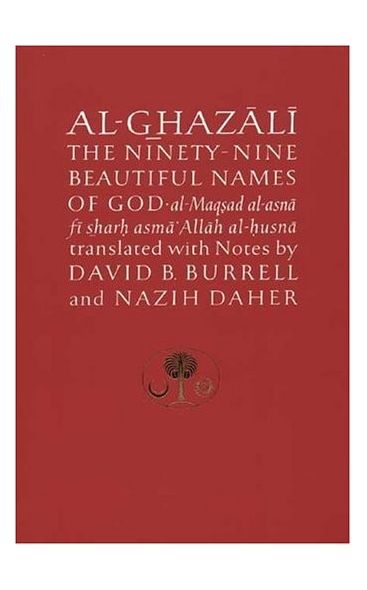 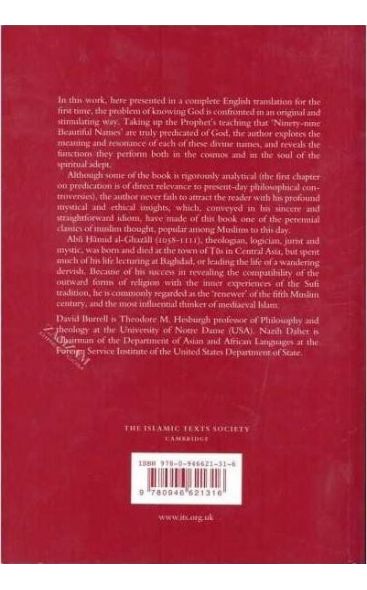 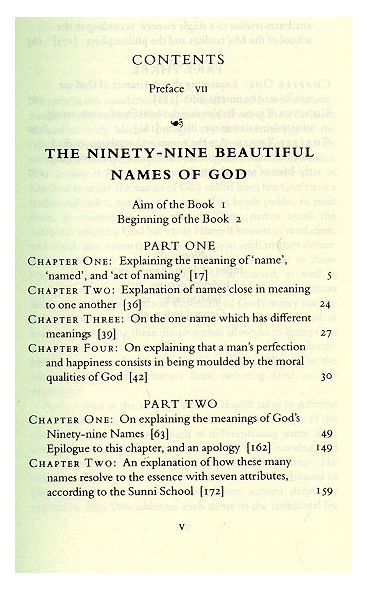 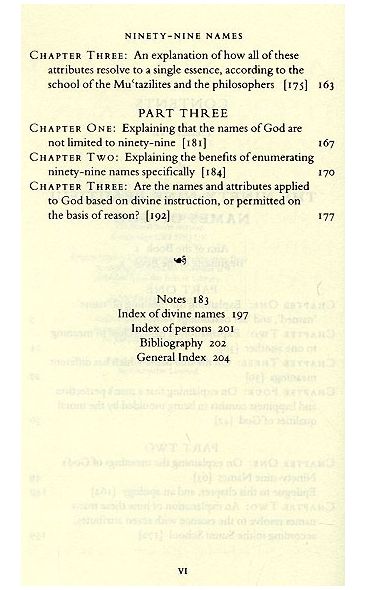 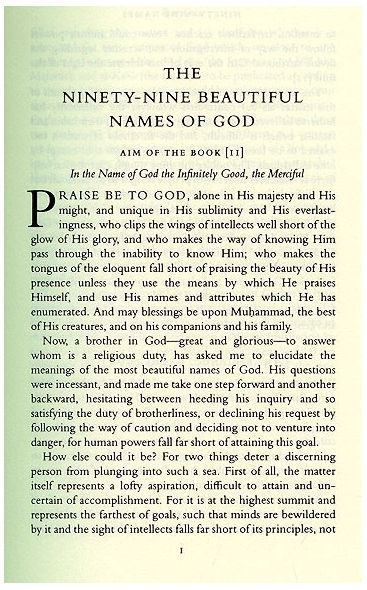 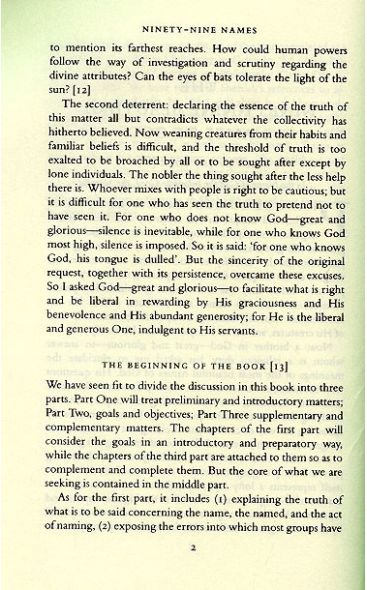 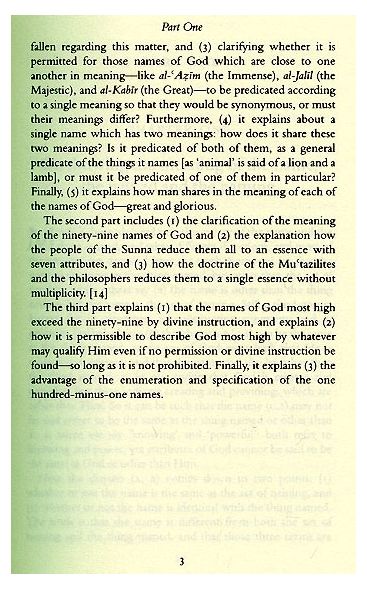 Al-Ghazali on the Ninety-nine Beautiful Names of God

In this work, here presented in a complete English edition for the first time, the problem of knowing God is confronted in an original and stimulating way.

​In this work, here presented in a complete English edition for the first time, the problem of knowing God is confronted in an original and stimulating way. Taking up the Prophet’s teaching that ‘Ninety-nine Beautiful Names’ are truly predicated of God, the author explores the meaning and resonance of each of these divine names, and reveals the functions they perform both in the cosmos and in the soul of the spiritual adept.

Although some of the book is rigorously analytical, the author never fails to attract the reader with his profound mystical and ethical insights, which, conveyed in his sincere and straightforward idiom, have made of this book one of the perennial classics of Muslim thought, popular among Muslims to this day.

This volume won a British Book Design and Production Award in 1993.

Aim of The Book

In the Name of God the Infinitely Good, the Merciful Praise be to God, alone in His majesty and His might, and unique in His sublimity and His everlastingness, who clips the wings of intellects well short of the glow of His glory, and who makes the way of knowing Him pass through the inability to know Him; who makes the tongues of the eloquent fall short of praising the beauty of His presence unless they use the means by which He praises Himself, and use His names and attributes which He has enumerated. And may blessings be upon Muhammad, the best of His creatures, and on his companions and his family.

Now, a brother in God—great and glorious—to answer whom is a religious duty, has asked me to elucidate the meanings of the most beautiful names of God. His questions were incessant, and made me take one step forward and another backward, hesitating between heeding his inquiry and so satisfying the duty of brotherliness, or declining his request by following the way of caution and deciding not to venture into danger, for human powers fall far short of attaining this goal.

How else could it be? For two things deter a discerning person from plunging into such a sea. First of all, the matter itself represents a lofty aspiration, difficult to attain and uncertain of accomplishment. For it is at the highest summit and represents the farthest of goals, such that minds are bewildered by it and the sight of intellects falls far short of its principles, not to mention its farthest reaches. How could human powers follow the way of investigation and scrutiny regarding the divine attributes? Can the eyes of bats tolerate the light of the sun?

The second deterrent: declaring the essence of the truth of this matter all but contradicts whatever the collectivity has hitherto believed. Now weaning creatures from their habits and familiar beliefs is difficult, and the threshold of truth is too exalted to be broached by all or to be sought after except by lone individuals. The nobler the thing sought after the less help there is. Whoever mixes with people is right to be cautious; but it is difficult for one who has seen the truth to pretend not to have seen it.

For one who does not know God—great and glorious— silence is inevitable, while for one who knows God most high, silence is imposed. So it is said: ‘for one who knows God, his tongue is dulled’. But the sincerity of the original request, together with its persistence, overcame these excuses. So I asked God—great and glorious—to facilitate what is right and be liberal in rewarding by His graciousness and His benevolence and His abundant generosity; for He is the liberal and generous One, indulgent to His servants.

The Beginning of The Book

We have seen fit to divide the discussion in this book into three parts. Part One will treat preliminary and introductory matters; Part Two, goals and objectives; Part Three supplementary and complementary matters. The chapters of the first part will consider the goals in an introductory and preparatory way, while the chapters of the third part are attached to them so as to complement and complete them. But the core of what we are seeking is contained in the middle part.

As for the first part, it includes (1) explaining the truth of what is to be said concerning the name, the named, and the act of naming, (2) exposing the errors into which most groups have fallen regarding this matter, and (3) clarifying whether it is permitted for those names of God which are close to one another in meaning—like al-Azim (the Immense), al-Jalil (the Majestic), and al-Kabir (the Great)—to be predicated according to a single meaning so that they would be synonymous, or must their meanings differ? Furthermore, (4) it explains about a single name which has two meanings: how does it share these two meanings? Is it predicated of both of them, as a general predicate of the things it names [as ‘animal’ is said of a lion and a lamb], or must it be predicated of one of them in particular? Finally, (5) it explains how man shares in the meaning of each of the names of God—great and glorious.

The second part includes (1) the clarification of the meaning of the ninety-nine names of God and (2) the explanation how the people of the Sunna reduce them all to an essence with seven attributes, and (3) how the doctrine of the Mu’tazilites and the philosophers reduces them to a single essence without multiplicity.

David Burrell is Theodore M. Hesburgh Professor of Philosophy and Theology at the University of Notre Dame, USA.

Nazih Daher is Chairman of the Department of Asian and African Languages at the Foreign Service Institute of the United States Department of State.