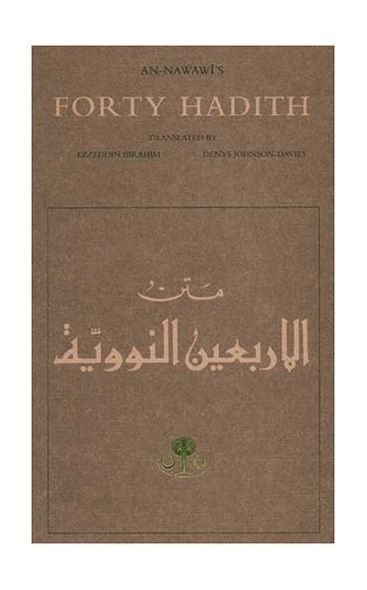 This collection of forty hadith by one of the most famous compilers of hadith, Imam An-Nawawi.

This collection of forty hadith by one of the most famous compilers of hadith is generally regarded as the most popular anthology and the best introduction to the study of the Prophet’s sayings which, together with the Qur’an, contain the essential teachings of Islam. The Arabic original has been printed alongside the English translation for the benefit of those with a knowledge of Arabic. The translation, by two scholars working in close collaboration, combines accuracy with readability.

HADITH 2: Also on the authority of Umar (may Allah be pleased with him), who said:

HADITH 19: On the authority of Abu Abbas Abdullah the son of Abbas (may Allah be pleased with them both), who said:

One day I was behind the Prophet (may the blessings and peace of Allah be upon him) and he said to me: Young man, I shall teach you some words [of advice ]: Be mindful of Allah, and Allah will protect you. Be mindful of Allah, and you will find Him in front of you. If you ask, ask of Allah; if you seek help, seek help of Allah. Know that if the Nation were to gather together to benefit you with anything, it would benefit you only with something that Allah had already prescribed for you, and that if they gather together to harm you with anything, they would harm you only with something Allah had already prescribed for you. The pens have been lifted and the pages have dried.

It was related by at-Tirmidhi, who said it was a good and sound Hadith. In a version other than that of at-Tirmidhi it reads:

Be mindful of Allah, you will find Him before you. Get to know Allah in prosperity and He will know you in adversity. Know that what has passed you by was not going to befall you and that what has befallen you was not going to pass you by. And know that victory comes with patience, relief with affliction, and case with hardship.

HADITH 29: On the authority of Mu’adh ibn Jabal (may Allah be pleased with him), who said:

I said: O Messenger of Allah, tell me of an act which will take me into Paradise and will keep me away from Hell-fire. He said: You have asked me about a major matter, yet it is easy for him for whom Allah Almighty makes it easy. You should worship Allah, associating nothing with Him; you should perform the prayers; you should pay the zakat; you should fast in Ramadan; and you should make the pilgrimage to the House. Then he said: Shall I not show you the gates of goodness? Fasting [which] is a shield; charity [which] extinguishes sin as water extinguishes fire; and the praying of a man in the depths of night. Then he recited: “Who forsake their beds to cry unto their Lord in fear and hope, and spend of that We have bestowed on them. No soul knoweth what is kept hid for them of joy as a reward for what they used to do.” Then he said: Shall I not tell you of the peak of the matter, its pillar, and its topmost part? I said: Yes, O Messenger of Allah. He said: The peak of the matter is Islam; the pillar is prayer; and its topmost part is jihad. Then he said: Shall I not tell you of the controlling of all that? I said: Yes, O Messenger of Allah, and he took hold of his tongue and said: Restrain this. I said: O Prophet of Allah, will what we say be held against us? He said: May your mother be bereaved of you, Mu’adh! Is there anything that topples people on their faces—or he said on their noses—into Hell-fire other than the harvests of their tongues?

It was related by at-Tirmidhi, who said it was a good and sound Hadith.

Abu Zakaria Mohiuddin Yahya Ibn Sharaf al-Nawawi (1233–1277), popularly known as al-Nawawi, an-Nawawi or Imam Nawawi (631–676 A.H. / 1234–1277 CE), was a Sunni Muslim author on Fiqh and Hadith. His position on legal matters is considered the authoritative one in the Shafi'i Madhhab. He was born at Nawa near Damascus, Syria. As with many Arabic and Semitic names, the last part of his name refers to his hometown.

He studied in Damascus from the age of 18 and after making the pilgrimage in 1253 he settled there as a private scholar. From a young age he showed signs of great intelligence, and so his father paid for a good education. As a judge, he was much sought after for advice and adjudication of disputes.

During his life of 45 yearshe wrote many books on Islamic studies and other topics. He collected and sourced 42 Hadith of the Islamic prophet, Mohammed back to one of his companions.

In 1267 he succeeded Abu Shama as professor of Hadith at the Ashrafiyya [school] in the city. He died at Nawa at a relatively young age, having never married.

Dr Ezzeddin Ibrahim was a renowned academic and an acknowledged Islamic scholar who was appointed as the Cultural Advisor to the late Sheikh Zayed bin Sultan Al Nahyan, Ruler of Abu Dhabi, founder and President of the UAE.

During Dr Ibrahim’s early career he held a number of educational and administrative positions in the field of education and scientific research in Egypt, Libya and Syria. In Qatar he devised a study programme for the Ministry of Education and in Saudi Arabia he held the eminent post of Professor of Arabic Literature at Riyadh University.

Throughout his life he remained passionate in his call for Islamic-Christian dialogue and worked tirelessly articulating his message, both in person as a key speaker at many international conferences and through his varied publications in journals, newspapers and books. During this time he came into contact with numerous distinguished people, and amongst those who had a profound effect on him was Pope Paul Vl who he met at his official residence in the Vatican in 1978 and the Dalai Lama whose philosophical and thoughtful insights left a lasting impression. Dr Ezzeddin Ibrahim fervently believed that dialogue begins by respecting the right of others to their beliefs and by strengthening the religious foundations for coexistence in one nation.

With that in mind and following a recent meeting with Pope Benedict, he worked closely with the ruler of Saudi Arabia, King Abdullah, to organize and participate in dialogue in Madrid in 2008, concentrating on life in human societies, international cooperation, human rights, issues of security, peace, and living together in the world. Besides speakers from the three monotheistic religions, Dr Ezzeddin, with the sincere support of a strong Middle Eastern monarch, was able to include delegates from other religious traditions, faiths and philosophies who he felt were under represented at such conferences. Although previously attempted and partly realised, this had not happened before, as it did so comprehensively in Madrid.

Davies, referred to as “the leading Arabic-English translator of our time” by the late Edward Said, has translated more than twenty-five volumes of short stories, novels, plays, and poetry, and was the first to translate the work of Nobel laureate Naguib Mahfouz. He is also interested in Islamic studies and is co-translator of three volumes of Prophetic Hadith. He has also written a number of children’s books adapted from traditional Arabic sources, including a collection of his own short stories, Fate of a Prisoner, which was published in 1999.

Born in 1922 in Vancouver, Canada to English parentage, Davies spent his childhood in Sudan, Egypt, Uganda, and Kenya, and then was sent to England at age 12. Davies studied Oriental languages at Cambridge, and has lectured translation and English literature at several universities across the Arab World. In 2006, he published his memoirs. In 2007, he was awarded the Sheikh Zayed Book Award "Culture Personality of the Year", a valued at about $300,000.

Davies lives between Marrakesh and Cairo.