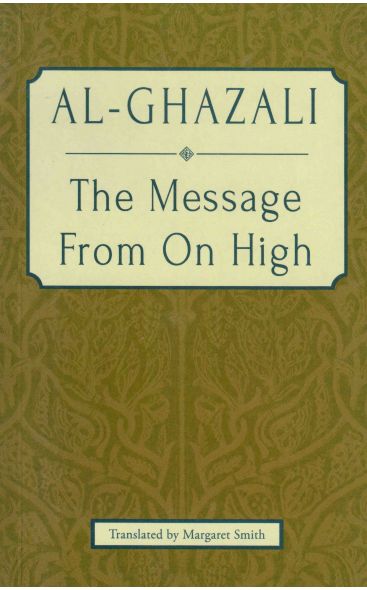 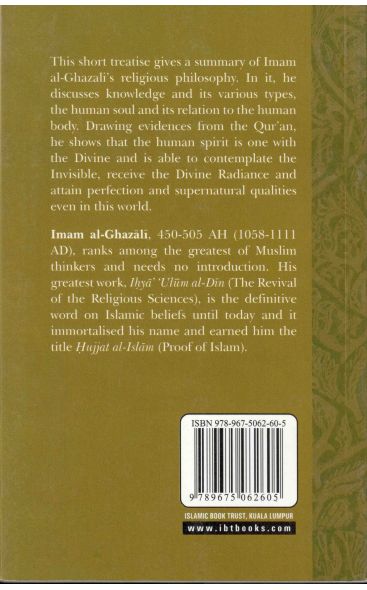 Ali-Ghazali The Message From On High

This short treatise gives a summary of Imam Al-Ghazali’s religious philosophy. In it, he discusses knowledge and its various types, the human soul and its relation to the human body.

This short treatise gives a summary of Imam Al-Ghazali’s religious philosophy. In it, he discusses knowledge and its various types, the human soul and its relation to the human body. Drawing evidences from the Qur’an, he shows that the humans spirit is one with the Divine and is able to contemplate the Invisible, receive the Divine Radiance and attain perfection and supernatural qualities even in this world.

Al-Ghazali outlines systematically his mystical philosophy. He begins by stating that knowledge can be accessed thorough divine and human learning. Only divine learning (al-ta’lim al-Rabbani), however, can grasp the ultimate knowledge of the intelligibles based on certainty. Divine learning in turn, can be divided into two: revelation (Wahy) and inspiration (ilham). Revelation is a spiritual phenomenon that happens to a prophet, in the form of a direct instruction of the soul by the Universal Intellect (al-Aql al-Kulliyah). While, lesser than revelation, inspiration happens to saints and sages, which is the direct instruction of the soul by the Universal Soul (al-Nafs al-Kulliyah).

While a solid intellectual condition can be attained through the habit of contemplation, independent reasoning and study. That is why, for al-Ghazali, mystical experience, which is not preceded by study and thinking can lead to confusion. And so, the supreme way to know the true qualities of things is a blend of wisdom, philosophical thinking and asceticism.

The last factor that is worth mentioning, is Al-Ghazali’s utilization of Hellenic and Hellenistic concepts in this own works. From the summary of al-Risalah al-Laduniyyah e, one can see very clearly the usage of neo-platonic key terminology. This Hellenistic aura within the work really gives a different image of al-Ghazali. He was ready to accept those thoughts as long as they are in accordance to the fundamentals of Islam. By amalgamating the fundamentals of religion, philosophical systems and sufism, Al-Ghazali is laying the foundation for the emergence of the Islamic mystical philosophy.