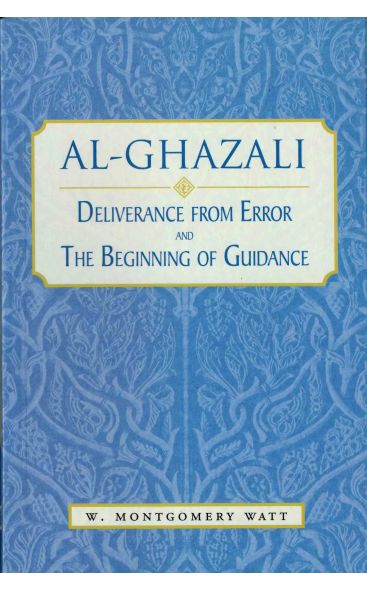 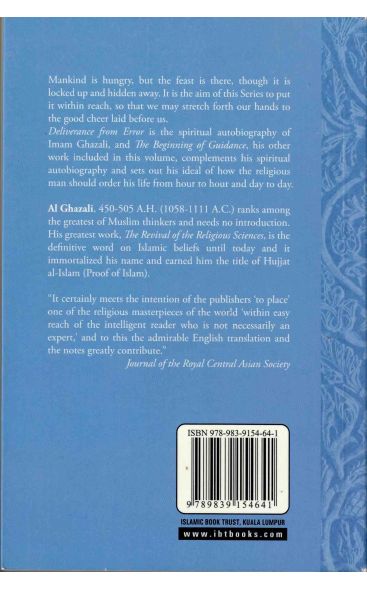 Al-Ghazali Deliverance From Error And The Beginning Of Guidance

The Adab of the True Seeker

On The Elucidation of The Marvels of The Heart

A Commentary of the Ratib of Imam al-Haddad

AL-GHAZALI ON THE CONDEMNATION OF PRIDE AND...

This volume contains a translation of Ghazali's autobiography The Deliverance from Error, in which the Imam describes his education and his intellectual crisis, which left him so paralysed by doubt that he was forced to resign the most distinguished academic appointment of his day.

The Beginning of Guidance Bidayatul Hidayah - Considered as an Introduction to The Ihya Ulum Ud Din.

Book can be considered as an Introduction to The Imam's Magnum Opus The Revival of the Religions Sciences (Ihya Ulum al-Din) and directs the reader to the larger work for what lies beyond that. This book may not seem to be suited to the hurried life of a modern city. Yet al-Ghazali’s seriousness and sense of urgency stand out vividly and communicate themselves. The book is interesting, too, in that, though al-Ghazali’s standpoint is almost modern in many ways.

It is divided in two Parts, namely acts of obedience and refraining from Sin. It comprise the fundamentals of Din, Important basic issues and excellent virtues. It is brief, yet concise.

One of the Scholars has said that the benefit on anything sacred can not be achieved unless one follows its Adab i.e Etiquettes, this book deals with many of the etiquettes of everyday life according to the Sunnah.

Imam Al-Ghazali's Bidaya al-hidaya complements his spiritual autobiography and sets out his ideal of how the religious man should order his life from hour to hour and day to day.

Abu Hamid Muhammad, famous in the world of learning as al-Ghazali was born in 450 AH (1058 A.D). in Persia. He graduated from the Nizamia Madressa at Nishapur, with distinction.a very famous educational institution in Nishapur. Later he was appointed as a teacher at the Nizamia College in Baghdad, where he proved very successful in imparting knowledge to the scholars under his care.

This valuable gift of sustaining interest of his pupils and passing on his knowledge to them made him so famous that students from all parts of the country flocked to study under him.

Imam al-Ghazzali was fondly referred to as the "Hujjat-ul-lslam", Proof of Islam, He is honoured as a scholar and a saint by learned men all over the world.

Al-Ghazali is generally acclaimed as the most influential thinker of the Classical period of Islam, in his autobiography The Deliverance from Error, the Imam describes his education and his intellectual crisis, which left him so paralysed by doubt that he he gave up his academic pursuits and worldly interests and became a wandering ascetic. This was a process (period) of mystical transformation.

Later, he resumed his teaching duties, but again left these. An era of solitary life, devoted to contemplation and writing then ensued, which led to the authorship of a number of everlasting books (Many of which have been translated in English).