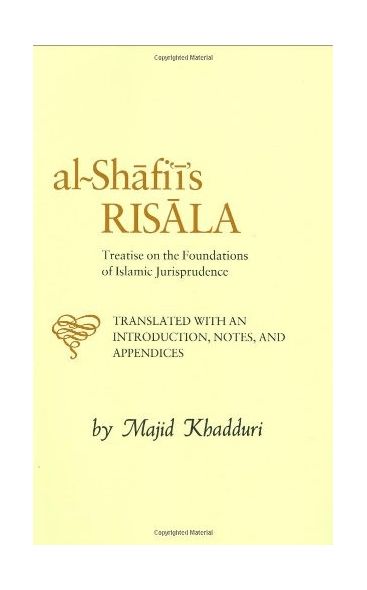 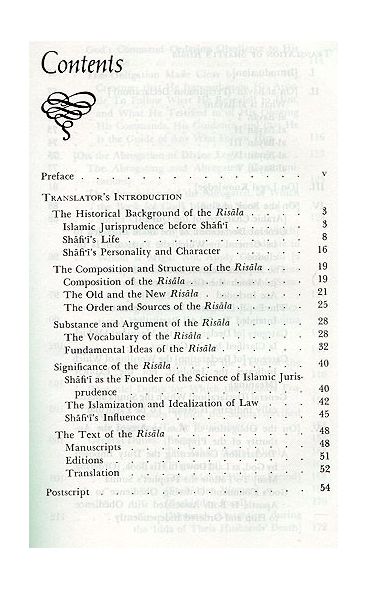 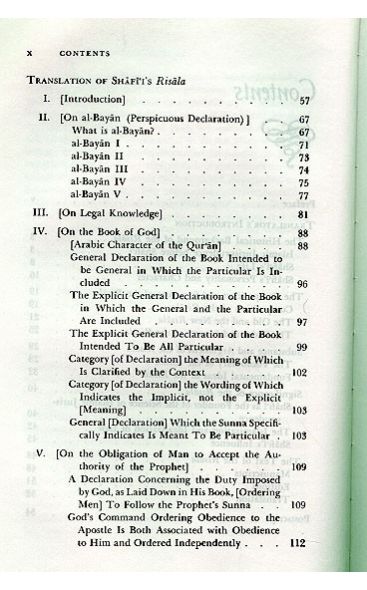 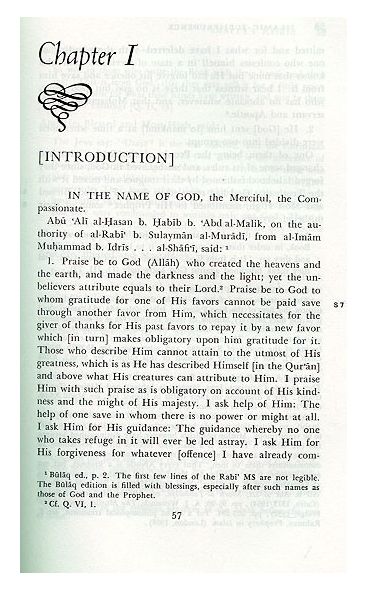 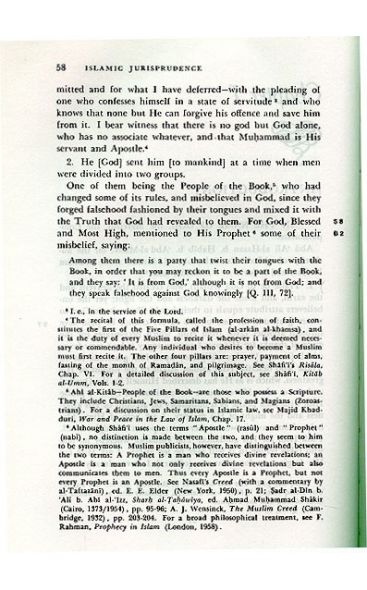 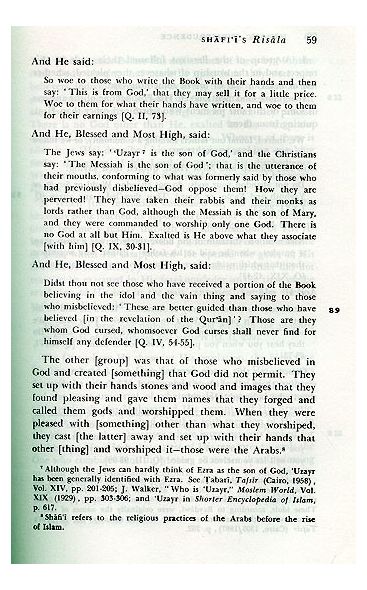 Al-Shafi’i’s Risala: Treatise on the Foundations of Islamic Jurisprudence

Written in the second Islamic century by al-Imam al-Shafi’i, this important work gives the fundamental principles of Islamic jurisprudence and its influence continues to the present day.

The Four Sources Of Shari'ah

The Pure Intention: On Knowledge Of The Unique...

The Splendid Pearl In Knowing The Muslim 's...

Ibn Qayyim Al-Jawziyya on Knowledge from Key to...

Written in the second Islamic century by Al-Imam al-Shafi’i (d. 204AH/820AD), the founder of one of the four Sunni schools of law, this important work gives the fundamental principles of Islamic jurisprudence and its influence continues to the present day. During the early years of the spread of Islam, the exponents of Islamic legal doctrine were faced with the problems raised by ruling and administering a diverse and rapidly growing empire. In Medina and Kufa, as well as other cities of early Muslim rule, schools of law had to be developed, but it took the genius of Muhammad b. Idris al-Shafi’i, born in the year 150AH/767AD, to establish the principles by which the various legal doctrines could be synthesized into a coherent system. In theRisala, which laid down the basis for such a synthesis, al-Shafi’i established the overriding authority, next only to the Qur’an, of the Sunna (example) of the Prophet Muhammad as transmitted in the traditions.

Professor Majid Khadduri has done an admirable service in making this valuable work available in English, His excellent translation uses not only the original manuscripts of Ibn Jama’a and al-Rabi, found at Dar al-Kutub, the National Library in Cairo, but also authoritative editions published earlier in this century, namely the Bulaq and Shakir editions. In his introduction, Professor Khadduri outlines the historical background of theRisalaand gives a biography of al-Imam al-Shafi’i as well as annotated, detailed summaries of the composition, structure, substance, and argument of the text. He also includes a list of transmitters of traditions, a glossary of the most important Islamic legal terms and a select bibliography. For this new edition, the index has been expanded and small corrigenda added.

‘One of the leading texts on Islamic Fiqh. A must for the bookshelf of all conscientious Muslims.

Abu ʿAbdillah Muhammad ibn Idris al-Shafi‘i was a Muslim jurist, who lived from (767 — 820 CE / 150 — 204 AH). Often referred to as 'Shaykh al-Islam' he was one of the four great Imams of which a legacy on juridical matters and teaching eventually led to the Shafi'i school of Fiqh (or Madhhab) named after him. Hence he is often called Imam al-Shafi‘i.

Al-Shafi’i developed the science of Fiqh unifying 'revealed sources' - the Quran and Hadith - with human reasoning to provide a basis in law. With this systematization of he provided a legacy of unity for all Muslims and forestalled the development of independent, regionally based legal systems. The four Sunni legal’s schools or Madhhab- keep their traditions within the framework that Shafi'i established.

Al-Shafi’i gives his name to one of these legal schools of Fiqh - the Shafi'i school - which is followed in many different places in the Islamic world: Indonesia, Malaysia, Egypt, Somalia, Yemen as well as Sri Lanka and southern parts of India.

Saladin built a madrassa and a shrine on the site of his tomb. Saladin's brother Afdal built a mausoleum for him in 1211 after the defeat of the Fatimids. It remains a site where people petition for justice.

Majid Khadduri (September 27, 1909 – January 25, 2007) was an Iraqi–born academic. He was the founder of the Paul H. Nitze School of Advanced International Studies Middle East Studies program. Internationally, he was recognized as a leading authority on a wide variety of Islamic subjects, modern history and the politics of the Middle East. He was the author of more than 35 books in English and Arabic and hundreds of articles.

29. Someone asked me: What is [legal] knowledge and how much should men know of it?

30. Shafi’i replied: Legal knowledge is of two kinds: one is for the general public, and no sober and mature person should be ignorant of it.

32. [Shafi’i] replied: For example, that the daily prayers are five, that men owe it to God to fast the month of Ramadan, to make the pilgrimage to the [Sacred] House whenever they are able, and to [pay] the legal alms in their estate; that He [God] has prohibited usury, adultery, homicide, theft, [the drinking of] wine, and [everything] of that sort which He has obligated men to comprehend, to perform, to pay in their property, and to abstain from [because] He has forbidden it to them.

This kind of knowledge may be found textually in the Book of God or may be found generally among the people of Islam. The public relates it the preceding public and ascribes it to the Apostle of God, nobody ever questioning its ascription or its binding force upon them. It is the kind of knowledge which admits of error neither in its narrative nor in its interpretation; it is not permissible to question it.

34. Shafi’i replied: It consists of the detailed duties and rules obligatory on men, concerning which there exists neither a text in the Book of God nor regarding most of them, a . Whenever a exists [in this case], it is of the kind related by few authorities, not by the public, and is subject to different interpretations arrived at by analogy.

35. He asked: Is [legal knowledge on this kind as obligatory as the other, or is it not obligatory so that he who acquires such knowledge performs a supererogatory act, and he who neglects it falls not into error? Or, is there a third kind, derived from a narrative () or analogy?

ON THE OBLIGATION OF MAN TO ACCEPTTHE AUTHORITY OF THE PROPHET

A Declaration Concerning the Duty Imposed by God, as Laid Down in His Book, [Ordering Men] To Follow the Prophet’s Sunna

86. Shafi’i said: God has placed His Apostle—[in relation to] His religion, His commands His Book—in the position made clear by Him as a distinguishing standard of His religion by imposing the duty of obedience to Him as well as prohibiting disobedience to Him. He has made His merits evident by associating belief in His Apostle with the belief in Him. For God, Blessed and Most High, said:

The believers are only those who have believed in God and His Apostle, and who when they are with him on some common affair do not go away until they ask his permission [Q. XXIV, 62].

Thus [God] prescribed that the perfect beginning of the faith, to which all other things are subordinate, shall be the belief in Him and then in His Apostle. For if a person believes only in Him, not in His Apostle, the name of the perfect faith will never apply to him until he believes in His Apostle together with Him.

So the Apostle laid down the [of reciting the Prophet’s name together with that of God] for testing the faith of every man [as the following tradition indicates]:

Malik b. Anas told us from Hilal b. Usama from Ata’ b. Yasar from Umar b. al-, who said:

[The transmitter’s name, Umar b. al-Hakam — Shafi’i says—should read Mu’awiya b. al-Hakam, for Malik, I believe, has not correctly reported the name, as others did.

87. Shafi’i said: God has imposed the duty on men to obey His divine communications as well as the of His Apostle. For He said in His Book:

O our Lord, raise up amongst them an Apostle, one of selves, to recite to them Thy signs and to teach them the Book and Wisdom and to purify them. Verily Thou art All-mighty, All-wise [Q. II, 123].

And He, glorious be His praise, said:

And also we have sent among you an Apostle, one of yourselves, to recite to you our signs, and purify you, to teach you the Book and the Wisdom, and to teach you what you did not know [Q. II, 146].

God bestowed a favor upon the believers when He raised up amongst them an Apostle, one of themselves, to recite His signs to them, to purify them and to teach them the Book, although they had formerly been in manifest error [Q. III, 158].

And He, glorious be His praise, said:

It is He who has raised up an Apostle among the untutored people, one of their number to recite to them His signs, to purify them, and to teach them the Book and the Wisdom, though formerly they had been in manifest error [Q. LXII, 2].

But remember the goodness which God has shown you and how much of the Book and the Wisdom He has sent down to you to admonish you thereby [Q. II, 231].

God has sent down to thee the Book and the Wisdom, and has taught thee what thou did not know before; the bounty of God towards thee is ever great [Q. IV, 113].

And call to mind the signs of God and the Wisdom which are recited in your houses; verily God is gentle, well-informed [Q. XXXIII, 34].

So God mentioned His Book—which is the Qur’an—and Wisdom, and I have heard that those who are learned in the Quran—whom I approve—hold that Wisdom is the of the Apostle of God. This is like what [God Himself] said, "but God knows best!" For the Quran is mentioned [first], followed by Wisdom; [then] God mentioned His favor to mankind by teaching them the Qur’an and Wisdom. So it is not permissible for Wisdom to be called here [anything] save the of the Apostle of God. For [Wisdom] is closely linked to the Book of God, and God has imposed the duty of obedience to His Apostle, and imposed on men the obligation to obey his orders. So it is not permissible to regard anything as a duty save that set forth in the Quran and the of His Apostle. For [God], as we have [just] stated, prescribed that the belief in His Apostle shall be associated with the belief in Him.

The of the Apostle makes evident what God meant [in the text of His Book], indicating His general and particular [commands]. He associated the Wisdom [embodied] in the with his Book but made it subordinate [to the Book]. Never has God done this for any of His creatures save His Apostle.