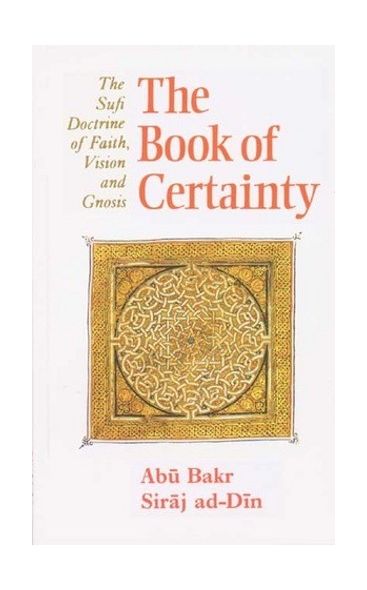 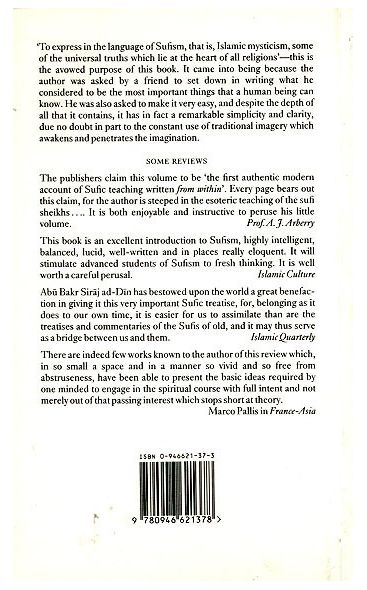 The Book of Certainty: The Sufi Doctrine of Faith, Vision and Gnosis

To express in the language of Sufism, that is, Islamic mysticism, some of the universal truths which lie at the heart of all religions is the sole purpose of this work.

​A Selection from the Table of Contents

Chapter Two THE GARDEN OF SPIRIT "And for him that feareth the High Degree of his Lord there are two gardens ... And beyond these are two other gardens ... Therein are two fountains gushing... Therein is fruit, and the date palm, and the Pomegranate." - Qur’an, LV 46, 62, 66, 68.

Betweenthe degree of human perfection and that of extinction in the Divine Perfection there are said to be innumerable spiritual degrees whose multiplicity is sometimes represented by a symbolic number as is the multiplicity of the different Heavens to which they correspond. Apart from considering Universal Man in the Supreme Truth, it is possible to consider him also according to his plenitude in one of these spiritual degrees. Thus, for example, it is said that on the Night Journey, when the Prophet Muhammad was taken from Mecca to Jerusalem, and thence up through the next world to the Divine Presence, he met one other Prophet in each of the seven Heavens; for this does not mean that each of these Prophets had only reached the Heaven in which he was encountered, but that as it were below his extinction in the Truth of Certainty his Spirit is considered as presiding over that particular Heaven in view of some special characteristic.

The seven Heavens together make up one of the Paradises, which the Chapter of the All-Merciful mentions in the above-quoted verses as being of the number of four. According to the commentary, the two first-mentioned of these Paradises are the gardens of the Soul and the Heart, above which is the celestial Paradise, the Garden of the Spirit, which comprises the seven Heavens, and finally the Garden of the Essence Itself.

When the Archangel Gabriel appeared to the Prophet on earth, he did so in the form of a man of the most marvellous beauty, for indeed the human eye was not created to receive ally more direct manifestation of the Truth than this, nor could the earth itself have endured the unmitigated presence of any heavenly power. But on the night journey, when the zenith of the seventh Heaven had been reached, all the Prophet’s possibilities had been as it were reabsorbed into his supreme spiritual plenitude which is named the Light of Muhammad (an-naru’l-muhammadi); and with the Eye of this Light he was able to look upon that which he had never seen before, and indeed his sight now demanded no less an object of perception than the full unveiled glory of the Archangel. Twice only did he behold this wonder, both times during the night journey. The first vision was just before the Light of Muhammad was reabsorbed into the Light of the Essence, that is, just before his entry into the Divine Presence. The second vision was on his emerging from the Presence, before he and the Archangel had begun their return journey in descent through the different Heavens, that is, before the two splendours had begun to diminish (just as in ascent they had gradually increased), each in proportion to the diminishment of the other’s capacity for beholding. It is the full vision which is referred to in the following verses from the Chapter of the Star; and these verses express also Universal Alan’s direct consciousness that absolutely nothing is Independent of the Truth and that even the greatest glories of creation, for all their apparently self-sufficient brightness, are not in Reality to he separated from the Glory of the Creator:

"And verily he saw him at another revelation, beside the lote-treeofthe uttermost boundary, whereby is the GardenofRefuge. When there enshrouded the lote-tree That Which enshroudeth, the sight wavered not, nor did it transgress. Verily he saw, of the Signs of his Lord, the Greatest." - Qur’an, LIII: 13-18

In the words of the commentator the lote-tree is ‘a tree in the seventh Heaven which marketh the boundary of the Angels’ knowledge. None of them knoweth what is beyond it ... It is the supreme Spirit(ar-rnhu’l-a’zam)... above which there is nothing but the Pure Selfhood(al-huwiyyah) ...He(the Prophet) was not veiled by it (the lote-tree) and its form, nor by Gabriel in the fullness of his angelhood, from the Truth (when It overflowed upon the lote-tree), and therefore He hath said:The sight wavered not,by turning aside and looking at other than It,nor did it transgress,through looking at itself and being veiled by the individuality.’

The date, which is the fruit of the Garden of the Spirit, is ‘that which containeth food and enjoyment, the contemplation of the Celestial Lights and of the Manifestations of the Divine Beauty and Majesty in the Station of the Spirit; for in its Paradise the kernel of the individuality still remaineth, taking nourishment and delight therefrom’. The pomegranate, which is the fruit of the Paradise of the Essence, is described as ‘that which containeth enjoyment and medicinal balm in the station of Union, in the Paradise of the Essence. It is direct consciousness of the Essence (ash-shuhud adh-dhati)through pure extinction in which there is no individuality to be fed but only unalloyed delight and the cure of the sickness of seeming to be left over (apart from the Truth) in a state of insecurity.’ This is the Fruit of the Truth of Certainty, and It is still beyond one who has reached only the Garden of the Spirit. But such a one may be said to have reached something more than the Eye of Certainty, for although his individuality, that is, his self, still appears to remain, not being utterly consumed in the Truth, he at least feels as it were the warmth of Its Flames, whereas the Eye of Certainty sees These Flames only, being the knowledge of one who has reached the state of human perfection and no more.

Abu Bakr Siraj ad-Din (1909–2005), also known as Martin Lings, was an English writer, a student of Frithjof Schuon and a renowned British Shakespearean scholar, with degrees in English and Arabic from London University and Oxford University. At Oxford, he studied English under C. S. Lewis, who later became a close friend. Lings taught at several European universities and the University of Cairo and served as the keeper of Oriental manuscripts for the British Museum and the British Library.

His friendship and similar beliefs with philosophers René Guénon and Frithjof Schuon inspired Lings to convert to Islam. He went on to become an influential member of Western Muslim society, participating in several international Islamic councils and conferences, including acting as consultant to the World of Islam Festival Trust. He is the author of twelve books on religion and spirituality.

‘To express in the language of Sufism, that is, Islamic mysticism, some of the universal truths which lie at the heart of all religions, this is the book’s avowed purpose. It came into being because the author was asked by a friend to set down in writing what he considered to be the most important things that a human being can know. He was also asked to make it very easy, and despite the depth of all that it contains, it has in fact a remarkable simplicity and clarity, due no doubt to the constant use of traditional imagery which awakens and penetrates the imagination.

‘Abu Bakr Siraj ad-Din has bestowed upon the world a great benefaction in giving it this very important Sufic treatise, for, belonging as it does to our own time, it is easier for us to assimilate than are the treatises and commentaries of Sufis of old.’Islamic Quarterly

‘A wonderful, short and sweet discussion of symbols and the spiritual world...an important and significant window into the Sufi mode of speech.’Journal of Islamic Studies.