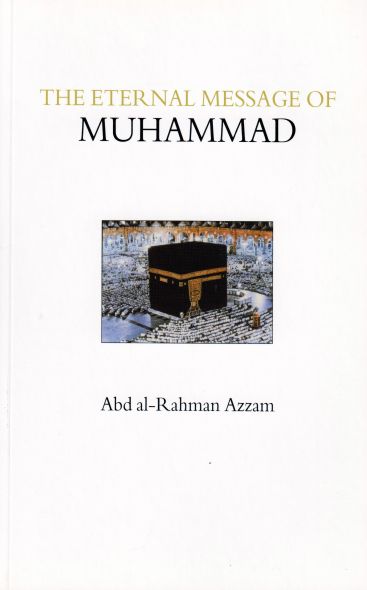 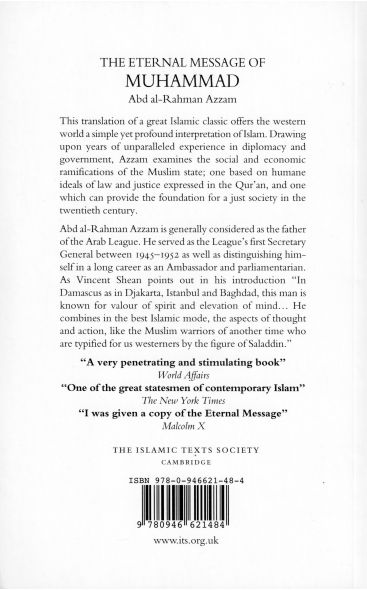 The Eternal Message of Muhammad

This translation into English of a great Islamic classic offers the western world a simple yet profound interpretation of Islam.

This translation into English of a great Islamic classic offers the western world a simple yet profound interpretation of Islam. Drawing upon years of unparalleled experience in diplomacy and government, Azzam examines the social and economic ramifications of the Muslim state, one based on humane ideals of law and justice expressed in the Qur’an, and one which can provide the foundation for a just society. Abd al-Rahman Azzam (1893-1976) is generally considered as the father of the Arab League. He served as the League’s first Secretary-General between 1945-52 as well as distinguishing himself in a long career as an ambassador and parliamentarian. As Vincent Sheean points out in his introduction, ‘In Damascus as well as in Djakarta, Istanbul and Baghdad, this man is known for valour of spirit and elevation of mind...He combines in the best Islamic mode, the aspects of thought and action, like the Muslim warriors of another time who are typified for us Westerners by the figure of Saladin.’ Malcolm X’s reading of The Eternal Message of Muhammadand his meeting with Azzam Pasha are vividly recounted in his Autobiography. It is clear that these events marked the point in his life at which Malcolm X turned towards orthodox traditional Islam.

‘One of the great statesmen of contemporary Islam.’The New York Times

Abdul Rahman Hassan Azzam (1893–1976), also known as Azzam Pasha, was an Egyptian diplomat, with family origins in Egypt. He served as the first secretary-general of the Arab League from 22 March 1945 to September 1952.

Azzam also had a long career as an ambassador and parliamentarian. He was an Egyptian nationalist and one of the foremost proponents of pan-Arab idealism – viewpoints he did not see as contradictory – and was passionately opposed to the partition of Palestine.

Caesar E. Farah was a professor of history at the University of Minnesota.

The Eternal Message of Muhammad

I did not plan to writeThe Eternal Message of Muhammadas a book. My intention in writing the original essays was to clarify for Muslims some of the principles and origins of their society, faith, and revealed Law, and to speak of the life of their Prophet. It was not my intention to apologize or preach to non-Muslims.

I may have been inspired also by fear of the onslaught of materialistic ideologies to which some older cultures in many European lands already have succumbed.

“Islam,” writes a Christian historian, “is at once a culture and a religion, and in which the culture can hardly be conceived of as existing apart from religion.” Consequently, if the Muslims lose their religion, they lose with it their culture and undergo a process of social dissolution. Moreover, the Arab nation (to which I belong), itself a creation of Islamic culture, would also cease to exist through the inevitable process of disintegration.

It therefore seems vital to defend our society against the impact of alien cultures, particularly those consumed by a materialistic outlook.

The nineteenth and twentieth centuries have seen Muslim society and institutions exposed to the impact of European culture, which has been influencing Muslim ways and thought and not always advantageously. European culture derives from older creeds and cultures of the same general background from which Muslim society draws its inspiration and strength. Christianity and Judaism are both recognized by the Koran as having a similar origin to that of Islam, and this gives them a common meeting ground.

In the twentieth century, Europe, both East and West, has been gradually losing the religious culture it inherited from previous centuries, and it has become proud and cynical in its scientific achievement and technological success. Today, a large part of the modern world worships its own image. On the other hand, Marxian socialism and welfare capitalism are alike creating rituals for the new materialistic creeds and philosophies in the West as well as in the Communist East.

The God of the universe, of Jews, Christians, Muslims, and all, is being dethroned in favor of an idol to which all kneel and offer sacrifices; that idol is called “a high standard of living”. It is becoming the object of unanimous reverence in our material age. In spite of the tug and attraction from both East and West, the Muslims still hesitate and doubt; they hate to join in the celebration of materialistic idols and creeds, but they are nevertheless attracted by the prospect of a higher standard of living.

Some of our people are being indoctrinated with the philosophies, dogmas, and rituals of the materialistic faith, but the majority of the Muslims in Africa and Asia are still confused and disturbed. They have known for a long time that they have a faith, a revealed Law, a society, and principles which call for a state that is neither secular nor theocratic but possibly both, and that is neither autocratic nor demagogic. Muslim society is based on the freedom of the individual and the equality of everyone. Muslim society is in its essence a free, classless society. It is classless not on the basis of any economic theory but on the basis of its egalitarian laws and its refusal to recognize distinction and honor except through piety and submission to the revealed Law, whose fundamental principles are universal, humane, and democratic. Nothing that is preached by the East or West is new to the Muslims. Reason is essential in judging even their dogmas and matters of faith, just as independent reasoning is one of the four sources of their jurisprudence.

Therefore, they are often troubled when told that these modem ideologies are the fruit of modem science and a ripe Western civilization. They ask themselves if it is really necessary to part with the Creator of the universe in order to share the fruits of modern science and technology. Must they ignore their beloved prophets, their tolerant universal culture, and their nation to enjoy the benefits of this age? Are they to part with their humane society and relaxed life, their trust in the inevitability of a destiny directed and ruled by the Almighty? They refuse to believe that human destiny and history are ruledand determined by a class struggle, for a system of wages. They do not believe, either, that a classless society on a material basis will be the fulfillment of history or of human destiny. The pretension that the eternal universe is planned for such an economic theory, or for a higher standard of living, is incomprehensible to the Muslim mind. Are they to give up the solidarity and mutual welfare which they enjoy with their families, relatives, neighbors because of such reasoning and to join in the general rush for the various societies of a Godless East or West?

These are some of the questions agitating the minds and hearts of those conscious and responsible among the six hundred million Muslims of all races and nations.

I have tried, in these pages, to give a few answers to these matters.

Islam is different from Judaism; Islam, being a universal submission to God, has no concept of a particular Covenant or a specially chosen people. It also differs from the Christian view of the Kingdom of God in heaven and the separate kingdom of Caesar on earth. And it differs from other religions, such as Buddhism and Hinduism. Islam is a faith, a law, a way of life, a “nation,” and a “state,” with a system of jurisprudence that is continually evolving for the administration of this world and the satisfaction of human needs under the sovereignty of our Creator. Islam’s Kingdom of God on earth, with its faith, its laws, piety, rituals, society, and state, is the prelude and the means to the afterlife.

The Muslims, while sharing many of the beliefs and precepts of other religions, particularly Judaism and Christianity, have a limited common ground with modem materialistic ideologies. Islam may share a belief in the importance of this world, the Kingdom on earth, but asks, “Why without God, the Creator?” And why a life whose rituals are based solely on economics? With such ideologies, Islam finds no possibility of compromise, being, as I have tried to point out in this book, a religion, a culture, a way of life, and an indivisible nation with an independent jurisprudence. Its classless community of partners has evolved from a totally different philosophy. It refuses to allow its indivisible culture and faith to be set aside in the pursuit of a planned economy or adjustment to a welfare state. Islam’s institutions are unique; they do not compromise with materialist dogmas. It stands firm on individual piety and individual freedom, a close-knit family devoted to the welfare of every relative, and a classless, benevolent society.

Though this book,The Eternal Message of Muhammad,may be lacking in scholarly gifts, it is a serious attempt to point out the Muslim answers to today’s world. It was first published in Arabic in 1946. It was translated and later published by Muslim scholars in Indonesia and Turkey. Its second Arabic edition, to which a section on the Muslim state and constitution was added, was published in Cairo in 1954. To this English translation I have added a new section, written directly in English, on the life of the Prophet, and a number of explanatory comments and notes. Whatever may be said about the book, we have no indication that during this period any of its material has been disputed by Muslim jurists or scholars in Muslim land.