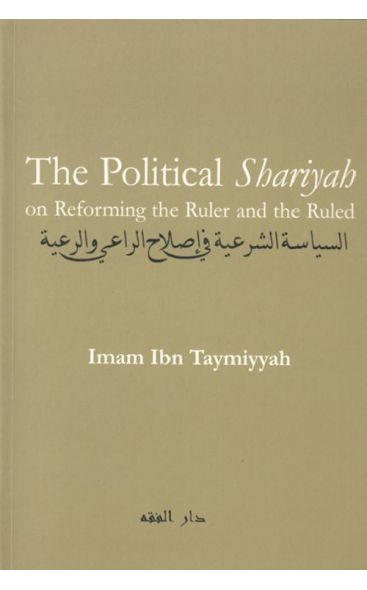 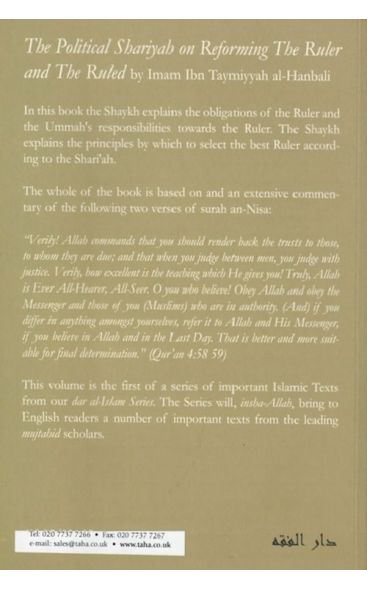 The Political Shariyah On Reforming The Ruler And The Ruled

In this book Imam Ibn Taymiyyah explains the obligations of the ruler and the ummah's responsibilities towards the Ruler. The shaykh explains the principles by which to select the best Ruler according to Shari'ah.

In this book Imam Ibn Taymiyyah explains the obligations of the ruler and the ummah's responsibilities towards the Ruler. The shaykh explains the principles by which to select the best Ruler according to Shari'ah.

The Book is based on an Extensive commentary of the following verses of Surah Nisa:

"Verily, Allah commands that you should render back the trusts to those, to whom they are due, and that when you judge between men, you judge with justice. Verily, how excellent is the teaching which He gives you! Truly, Allah is Ever All-Hearer, All-Seer."

"O you who believe! Obey Allah and obey the Messenger, and those charged with authority among you. If you differ in anything among yourselves, refer it to Allah and His Messenger, if ye do believe in Allah and the Last Day: that is best, and most suitable for final determination." - TM Qur'an 4:58-59

This volume is the first of a series of important Islamic Texts from dar al-Islam series. The series will insha allah, bring to English readers a number of important texts from the leading Mujtahid scholars.

His family had long been renowned for its learning , among his teachers, was Shams ud-Din Al-Maqdisi, first Hanbali Chief Justice of Syria following the reform of the judiciary by Baibars. The number of Ibn Taymiyyah's teachers exceeds two hundred. Ibn Taymiyyah was barely seventeen, when Qadi Al-Maqdisi authorised him to issue Fatwa (legal verdict). Qadi remembered with pride that it was he who had first permitted an intelligent and learned man like Ibn Taymiyyah to give Fatwa.

At the same age, he started delivering lectures. When he was thirty, he was offered the office of Chief Justice, but refused, as he could not persuade himself to follow the limitations imposed by the authorities.

Imam Ibn Taymiyyah's education was essentially that of a Hanbali theologian and jurisconsult. But to his knowledge of early and classical Hanbalism, he added not only that of the other schools of jurisprudence but also that of other literature.