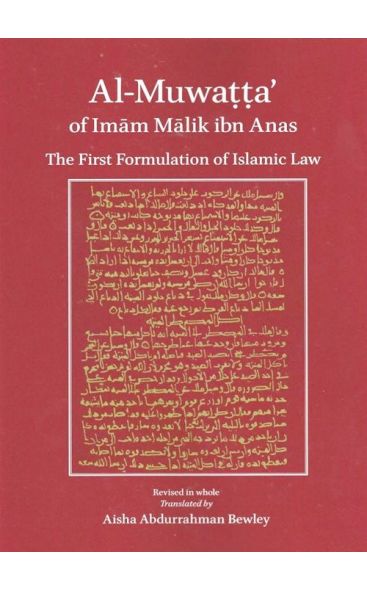 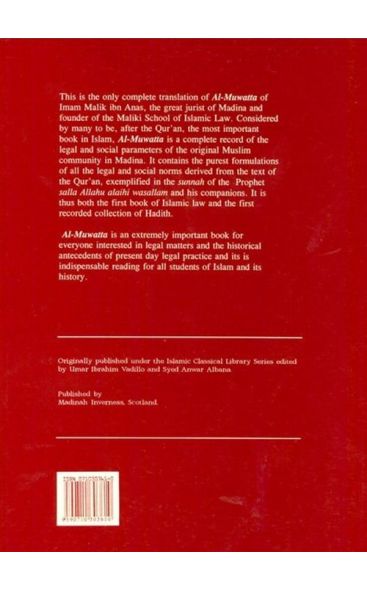 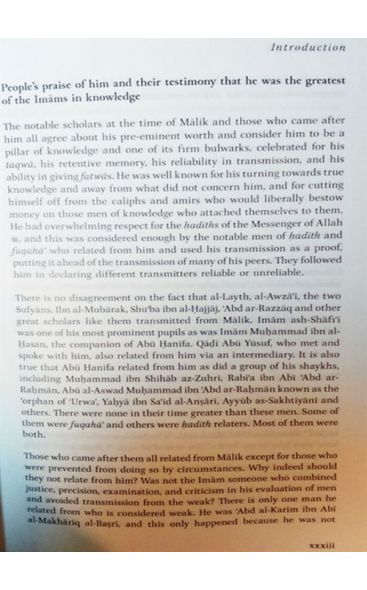 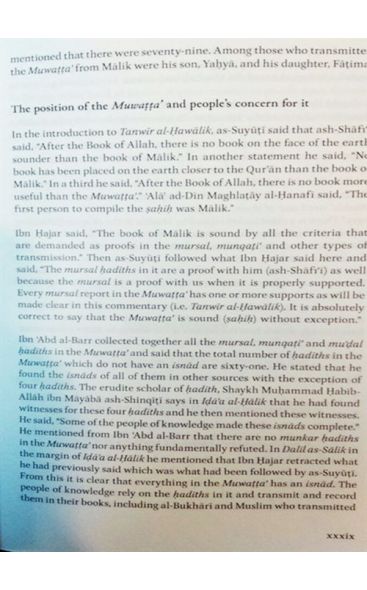 The first formulation of Islamic Law based on the behaviour of the people of Madinah during the time of the Prophet (PBUH), and the great Companions, Al-Muwatta is the blueprint for a just and radiant society: the earliest, clearest, cleanest record of salafi Islam.

The Fathers and Sons of Deoband (Akabir Ulama e...

This is the third revised edition of the classic work "Al-Muwatta' Of Imam Malik Ibn Anas".

It is the first of the works, long pre-dating al-Bukhari and Muslim.

Al-Bukhari regarded the transmission of Imam Malik narrating from Nafi‘ from ‘Abdullah ibn ‘Umar from the Messenger of Allah, may Allah bless him and grant him peace, as being ‘the Golden Chain of Transmission’.

Abu Dawud, whose Sunan is another of the Six Books of hadith, added “then Malik, from az-Zuhri, from Salim, from his father [i.e. Ibn ‘Umar], then Malik, from Abu z-Zinad, from al-A‘raj, from Abu Hurayrah”, without mentioning anything from anyone other than Malik.

Ibn Hajar said, “… some imams say that they are unqualifiedly the soundest of , such as az-Zuhri i.e. the hadith which az-Zuhri – who is better known as Ibn Shihab – narrated from Salim i.e. transmitting to him from Salim ibn ‘Abdullah ibn ‘Umar from his father. The school of Ahmad [ibn Hanbal] and Ibn Rahwayh is that this is unqualifiedly the soundest chain of transmission”.

Adh-Dhahabi held “The soundest of chains of transmission are those from az-Zuhri from Sa‘id ibn al-Musayyab from Abu Hurayrah” which are abundant in the Muwatta. Then those which come from Abu’z-Zinād from al-A‘raj from Abū Hurayrah.”

Ash-Shāfi‘ī said, “After the Book of Allah, there is no book on the face of the earth sounder than the book of Mālik.”

Ibn Ḥajar said, “The book of Mālik is sound by all the criteria that are demanded as proofs in the , munqaṭi‘ and other types of transmission.”

As-Suyūṭī followed Ibn Ḥajar’s and said, “It is absolutely correct to say that the Muwaṭṭa’ is sound (ṣaḥīḥ) without exception.”

Al-Bukhārī and Muslim transmitted most of its ḥadīths and included them in their Ṣaḥīḥ collections. The authors of the rest of the six books, the Imām of the ḥadīth scholars, Aḥmad ibn Ḥanbal, and others did the same.

In addition, the Muwaṭṭa’  contains a record of the practice (‘amal) of the people of Madīnah of the first generations, a transmission of the ethos that permeated the city, and Imām Mālik’s painstaking clarification of the Sunna, the ḥadīths, the practice legal .

Among the huge number of his teachers in ḥadīth and fiqh were Nāfi‘, the mawlā of ‘Abdullāh ibn ‘Umar, and Ibn Shihāb az-Zuhrī. He sat to give fatwāwhen he was seventeen years old after seventy Imāms had testified that he was worthy to give fatwā and teach.

He is to be the subject of the hadith from Abū Hurayra:

“The Messenger of Allah, peace be upon him said, ‘There will come a time when the people will beat the livers of their camels in search of knowledge and they will not find ālim with more knowledge than the ‘ālim of Madīna.’”