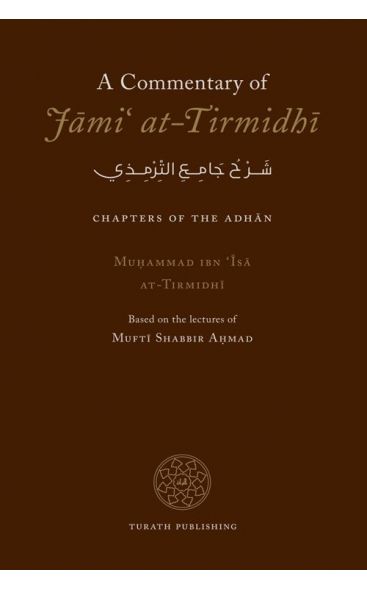 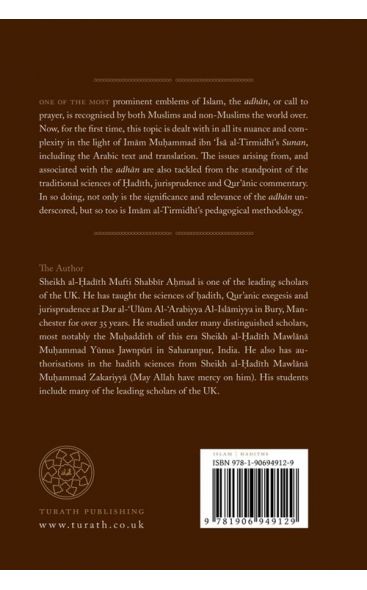 A Commentary of Jami' At-Tirmidhi: Chapters of The Adhan

Adhan: dealt with in all its nuance and complexity in light of Imam Muhammad ibn Isa al-Tirmidhi's Sunan, including the Arabic text & translation.

One of the most prominent emblems of Islam, the adhan, or call to prayer, is recognised by both Muslims and Non-Muslims the world over. Now, for the first time, this topic is dealt with in all its nuance and complexity in light of Imam Muhammad ibn Isa al-Tirmidhi's Sunan, including the Arabic text & translation.

The issues arising from, and associated with the Adhan, are also tackled from the standpoint of the traditional sciences of Hadith, jurisprudence and Qur'anic commentary. In doing so, not only is the significance and relevance of the Adhan underscored, but so too is Imam al-Tirmidhi's pedagogical methodology.

Muhammad b. 'Isa b. Thawra b. Musa b. al-Dahhak. Tirmidhi. His Kunya was Abu 'Isa but most widely known as Imam Tirmidhi. He was born in the year 209 A.H.

He was the compiler of al-Jami' at-Tirmidhi which is among the six authentic books of hadith.
​
According to Ibn Taymiyya and Shah Waliullah, Imam Timidhi was an independent Jurist (Mujtahid).

Imam At-Tirmidhi died in Rajab 279 A.H. at the age of seventy.

Sheikh al-Hadith Mufti Shabbir Ahmad is one of the leading scholars of the UK. He has taught the sciences of hadith, Qur'anic exegesis and jurisprudence at Dar al-Ulam al-Arabiyya AI-Islamiyya in Bury, Manchester for over 35 years.