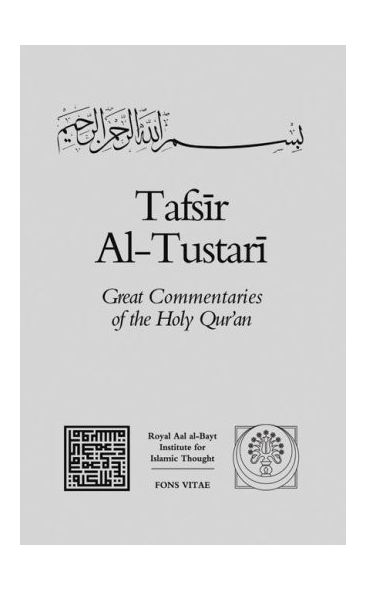 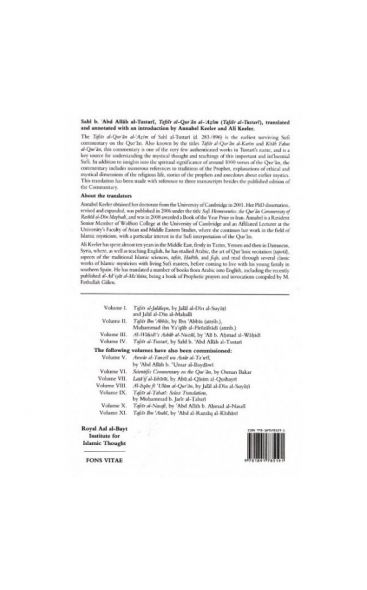 Tafsir Al-Tustari, presented here in complete English translation for the first time ever, is the fourth work in The Great Commentaries on the Holy Qur’an series.

Tajweed For young Children – A Translation of...

"Here is news that will be of interest to many of us working on Qur'an and Sufi traditions:  the publication of Tustari's Tafsir.
The series is shaping up to be a legendary one in the field of Tafsir studies"

Tafsir Al-Tustari, presented here in complete English translation for the first time ever, is the fourth work in The Great Commentaries on the Holy Qur’an series. The series aims to make widely available leading exegetical works in translation for study and research in unabridged form, which are faithful to the letter and meaning of the Arabic.

The Tafsir Al-Tustari is the earliest surviving Sufi commentary on the Qur'an. This commentary is one of the few authenticated works in Tustari's name, and is a key source for understanding the mystical thought and teachings of this important and influential Sufi. In addition to insights into the spiritual significance of almost 1000 verses of the Qur'an, this commentary includes numerous references to traditions of the Prophet, explanations of the ethical and mystical dimensions of the religious life, stories of the prophets, and anecdotes about earlier mystics. The translation has the benefit of reference to three good manuscripts in addition to the printed edition of the text, and is generously augmented with explanatory footnotes throughout. The book will not only provide its readers with an invaluable introduction to the Sufi tradition of Qur'anic interpretation, but also acquaint them with spiritual doctrines that were to become fundamental to the later development of Sufism.

This is the first complete translation into English of any Sufi Qur'an commentary, and will be a substantial and much-needed primary resource for the study of the Qur'an, Islamic mysticism and the history of Islamic thought. Whilst there is an increasing number of works by the great Sufi masters available in Western languages, there has been no complete Sufi commentary available in English translation, in its entirety, until now.

Sahl al-Tustarī laid the foundation for many later Sufi thinkers, including Abū Ḥāmid al-Ghazālī (d. 505/1111), Shihāb al-Dīn Suhrawardī (d. 587/1191), and Ibn ʿArabī (d. 638/1240). His commentary, known as Tafsīr al-Tustarī, or Tafsīr al-Qurʾān al-ʿAẓīm, is important as one of the earliest Sufi commentaries and for the way in which it presents connections between verses and topics that may initially appear unrelated, but are revealed through Tustarī’s insights to be profoundly linked. These inner meanings are the heart of Sahl al-Tustarī’s commentary, which also includes numerous sayings of Sufi masters-all seamlessly interwoven into his explanation of these 1000 verses.

The translation itself is eminently readable and beautifully clear. In addition to the translation, Annabel Keeler’s introduction provides a coherent and comprehensive presentation of Tustarī’s doctrines and the more complex aspects of his teachings. It includes his biography and approach to the commentary, as well as detailed explanations of Tustarī’s understanding of the Muḥammadan Light; cosmology and eschatology; spiritual psychology (including such terms as nafs, rūḥ, qalb); knowledge, faith, and certainty; and the spiritual path. The translation is followed by a Qurʾānic index that is particularly important for the reader who wants to see all that Tustarī says on a given verse, and because Tustarī often draws from verses in other surahs. The detailed subject index makes this a indispensable reference work.

Below is a taste of Tustarī’s metaphorical and symbolic interpretations, simply and clearly
presented.
-----------------------
In his commentary on the words, That you may warn [the people of] the mother of cities, and those around it... [42:7], he says,
In its outward meaning, it [the mother of cities] refers to Mecca. In its inner meaning it
refers to the heart, while those around it refer to the bodily members (jawāriḥ). Therefore
warn them, that they might safeguard their hearts and bodily members from delighting in
acts of disobedience and following [their] lusts.

Annabel Keeler translates the following passage, on Tustarī’s use of the terms nafs and rūḥ:
The lower self (nafs) desires the world because it comes from that, but the spirit (rūḥ)
desires the Hereafter because it comes from that. Gain ascendancy over the lower self and
open for it the door to the Hereafter by glorifying [God] (tasbīḥ) and seeking forgiveness
for your nation.
Tustarī sometimes contrasts the lower self (nafs) with the heart (qalb), as, for example, when he explains:
If your lower self overpowers your heart, it will drive you to the pursuit of desire (hawā).
But if your heart overpowers your lower self and your bodily members, it will tether them
with propriety (adab), compel them into worship (ʿibāda), and then adorn them with
sincerity in servanthood.

The use of symbolism can be seen in the interpretation of a variety of verses, as below, where Tustarī employs the symbolism of the house for the heart when he comments on houses [lying] deserted [27:52], and explains:
Their houses are an allusion to hearts; for there are hearts which are inhabited (ʿāmir)
through remembrance (dhikr), and there are those which are ruined (kharib) through
heedlessness (ghafla). Whomsoever God, Mighty and Majestic is He, inspires with [His]
remembrance, He has freed from oppression (ẓulm).
Again, Tustarī presents the heart as God’s property:
Truly the heart is [like] a house: if it is unoccupied it goes to ruin, while if it is occupied
by other than its owner, or by other than one whom the owner has settled there, it will
also go to ruin. Therefore, if you wish your hearts to be in good repair, do not let your
prayer in them be other than to God, Exalted is He.

Tustari is most famous for his controversial claim that "I am the Proof of God for the created beings and I am a proof for the saints (awliya) of my time" and for his well-known Tafsir, a commentary on and interpretation of the Qur'an.

Dr. Annabel Keeler obtained her doctorate from Cambridge University in 2001. Her dissertation, revised and expanded, was published in 2006 under the title "Sufi Hermeneutics: The Qur'an Commentary of Rashid al-Din Maybudi." She recently completed a research fellowship at Wolfson College, Cambridge, where she now continues her work in the field of Islamic mysticism with a particular interest in the Sufi interpretation of the Qur'an. Apart from her book on Maybudi's Qur'an commentary, she has published a number of articles in the field of Islamic mysticism and Sufi hermeneutics. She is currently preparing a monograph of the 9th Century mystic Abu Yazid al-Bistami.

Ali Keeler has spent almost ten years in the Middle East, firstly in the Yemen and then in Damascus, where as well as teaching English, he has studied Arabic, the art of Qur'anic recitation, aspects of the traditional Islamic sciences, and has read through several classic works of Islamic mysticism with living Sufi masters. He has translated a number of books into English, including "Selected Prayers of the Prophet Muhammad and Great Saints" and "A Tourist Guide to Craq de Chevalier."

Dr. Yousef Waleed Meri (Editor) is a leading specialist in Islam of the pre-modern period, Islamic cultural and social history and interfaith relations. He received a B.A. (Magna cum laude) from University of California, Berkeley in 1992, an M.A. from the State University of New York Binghamton in 1995 and a D.Phil. from Wolfson College, Oxford University in 1999. Currently, he is a Fellow and Special Scholar in Residence at the Royal Aal al-Bayt Institute for Islamic Thought (Amman, Jordan), which is under the patronage of Abdallah II, King of Jordan. He has published numerous articles and books dealing with various aspects of Islamic history, civilization and ritual practice.