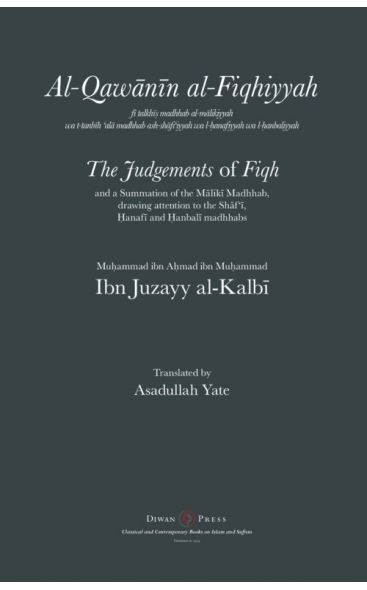 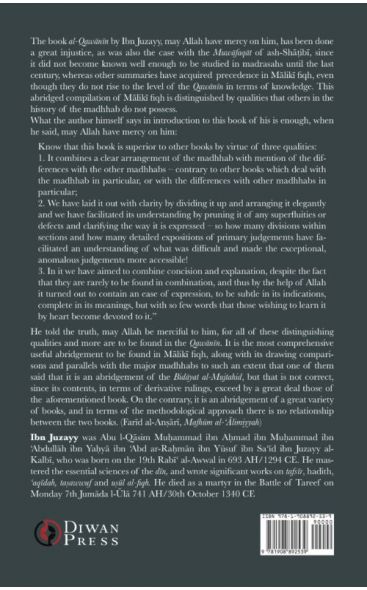 The Judgements of Fiqh and A Summation of The Maliki Madhhab, Drawing Attention To The Shafi'i, Hanafi And Hanabali Madhhabs

The book al-Qawānīn by Ibn Juzayy, may Allah have mercy on him, has been done a great injustice, as was also the case with the Muwāfaqāt of ash-Shāṭibī, since it did not become known well enough to be studied in madrasahs until the last century, whereas other summaries have acquired precedence in Mālikī fiqh, even though they do not rise to the level of the Qawānīn in terms of knowledge. This abridged compilation of Mālikī fiqh is distinguished by qualities that others in the history of the madhhab do not possess.

What the author himself says in introduction to this book of his is enough, when he said, may Allah have mercy on him:

Know that this book is superior to other books by virtue of three qualities:

2. We have laid it out with clarity by dividing it up and arranging it elegantly and we have facilitated its understanding by pruning it of any superfluities or defects and clarifying the way it is expressed – so how many divisions within sections and how many detailed expositions of primary judgements have facilitated an understanding of what was difficult and made the exceptional, anomalous judgements more accessible!

3. In it we have aimed to combine concision and explanation, despite the fact that they are rarely to be found in combination, and thus by the help of Allah it turned out to contain an ease of expression, to be subtle in its indications, complete in its meanings, but with so few words that those wishing to learn it by heart become devoted to it.”

He told the truth, may Allah be merciful to him, for all of these distinguishing qualities and more are to be found in the Qawānīn. It is the most comprehensive useful abridgement to be found in Mālikī fiqh, along with its drawing comparisons and parallels with the major madhhabs to such an extent that one of them said that it is an abridgement of the Bidāyat al-Mujtahid, but that is not correct, since its contents, in terms of derivative rulings, exceed by a great deal those of the aforementioned book. On the contrary, it is an abridgement of a great variety of books, and in terms of the methodological approach there is no relationship between the two books. - (Farīd al-Anṣārī, Mafhūm al-‘Ālimiyyah)

He mastered the essential sciences of the dīn, and wrote significant works on tafsīr, hadith, ‘aqīdah, taṣawwuf and uṣūl al-fiqh. He died as a martyr in the Battle of Tareef on Monday 7th Jumāda l-Ūlā 741 AH/30th October 1340 CE.