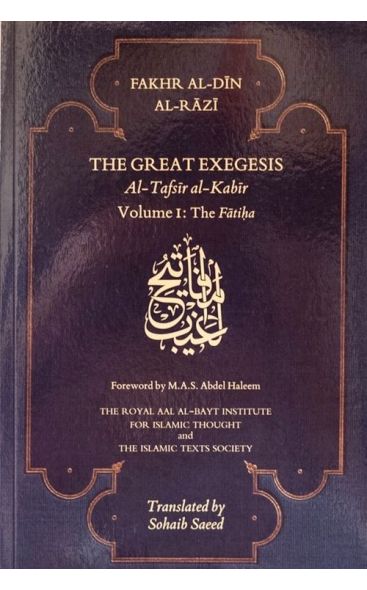 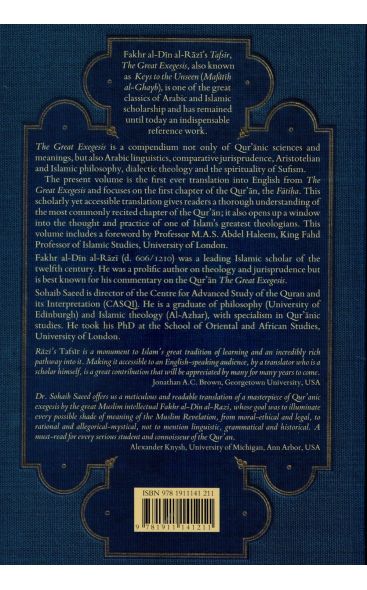 The Great Exegesis: Tafsir Al-Kabir - Volume I: The Fatiha

This is the work of Imam Fakhr al-din al-Razi (died 606 Hijrah). Its real name is Mafatih al-Ghayb, but is popularly known as Tafsir Kabir'.

Al-Tafsir al-Kabir: This is the work of Imam Fakhr al-din al-Razi (died 606 Hijrah). Its real name is Mafatih al-Ghayb, but is popularly known as Tafsir Kabir'. He is an imam of the theology of Islam, therefore, great emphasis has been laid in his Tafsir on rational and scholastic debates and on the refutation of false sects'.

But, the truth is that this Tafsir is, in its own way, a unique key to the Qur'an as well. Furthermore, the pleasing way in which the meanings of the Qur'an have been clarified and the mutual link of the Qur'anic verses established, is all too praise-worthy.

Most likely, Imam Razi himself wrote down his Tafsir as far as Surah al-Fath. Onwards from there, he could not complete. So, the remaining part of the tafseer, from Surah al-Fatiha to the end, was completed by Qadi Shihab al-Din ibn Khalil al-Khawli al-Dimashqi (died 639 Hijrah) or Shaykh Najm al-Din Ahmad ibn Muhammad al-Qamuli (died 777 Hijrah). (Kashaf al-Zunun v. 2, p. 477)

This work gives a thorough understanding of the most commonly recited chapter of the Qur’an - "Al-Fatiha".

The Great Exegesis, also known as Mafatih al-Ghayb is a famous classical book written by Fakhr Al-Din Razi in sixth century AH (twelfth century AD). It is a well-known tafsir of Qur'an which is widely used for reference till today by the scholars and students alike.

The present work is the first ever translation into English from Mafatih al-Ghayb and deals with "Surah Fatiha", the first chapter of the Holy Qur'an. It is a compendium of Qur’anic sciences and meanings, Arabic linguistics, comparative jurisprudence, Aristotelian and Islamic philosophy, dialectic theology and the spirituality of Sufism.

'An ocean that contains more pearls than the ocean.' The principal spokesman of Ahl al-Sunnah in his time, he refuted all the sects with which he came into contact, particularly the multifarious groups of the Mu'tazila, Shi'a, and Hashwiyya as well as the Jews and Christians. A student of his father Khatib al-Rayy Diya' al-Din 'Umar and Majd al-Din al-Jili al-Maraghi principally, then Abu Muhammad al-Baghawi and Kamal al-Din al-Simnani, he memorized early on Imam al-Haramayn's work in kalam entitled al-Shamil.

He began his scholarly career in poverty and died at sixty-three at the height of fame and wealth, poisoned, it is said, by the Karramiyya of Herat who were envious of his great following among the princes of Khurasan.

He travelled widely before settling in Herat ​(in modern Afghanistan). The author of more than 100 books (on subjects as diverse as medicine, mineralogy, and grammar), he gained fame and wealth through his scholarship and skill in debate, in which he often presented unorthodox views fully and favourably before refuting them.

Though this led to accusations of heresy, it has preserved information about little-known sects. His works include one of the major commentaries on the Qur'an, The Keys to the Unknown (or The Great Commentary), and Collection of the Opinions of Ancients and Moderns.

Sohaib Saeed is director of the Centre for Advanced Study of the Quran and its Interpretation (CASQI). He is a graduate of philosophy (University of Edinburgh) and Islamic theology (Al-Azhar), with specialism in Qur’anic studies. He took his PhD at the School of Oriental and African Studies, University of London.