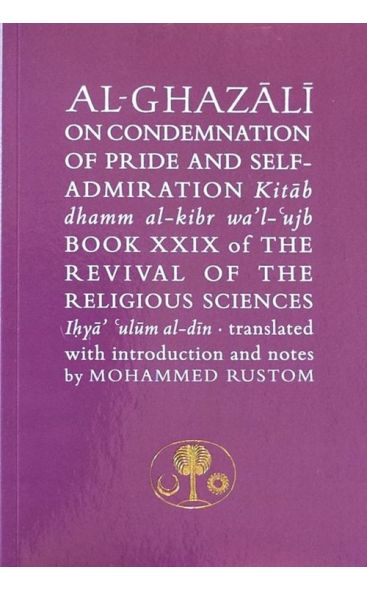 AL-GHAZALI ON THE CONDEMNATION OF PRIDE AND SELF-ADMIRATION

This book is an English Translation of Kitab dhamm al-kibr wa'l-ujb: Book XXIX of the Revival of the Religious Sciences (Ihya’ ‘Ulum al-Din) of Imam Al-Ghazali.

The Condemnation of Pride and Self-Admiration is the twenty-ninth chapter of The Revival of the Religious Sciences, a monumental work of classical Islam written by the theologian-mystic Abu Hamid Muhammad al-Ghazali. Perhaps the most important chapter in the whole of Revival, The Condemnation of Pride and Self-Admiration delves into the fundamental spiritual ailments and major impediments of the soul, namely pride and self-admiration.

In Part One, Ghazali focuses on pride, firstly by showing how the Qur’an condemns it, then by demonstrating what pride is and what its symptoms are, how pride manifests outwardly, as well as the seven causes of pride, the root cause being self-admiration. In seeking ways to cure the soul of pride, Ghazali presents the virtue of humility as the spiritual virtue par excellence; he offers examples of true humility, of false humility, and the manner by which the seven causes of pride can be uprooted.

In Part Two, Ghazali hones in on the root cause of pride: self-admiration. As with pride, Ghazali defines self-admiration, shows the various ways it manifests inwardly, how it causes negligence, delusion and complacency, how each of these can be remedied.

Mohammed Rustom is Associate Professor of Islamic Studies at Carleton University. He is the author of the award-winning book The Triumph of Mercy: Philosophy and Scripture in Mulla Sadra (2012) and co-editor of The Study Quran: A New Translation and Commentary (2015).