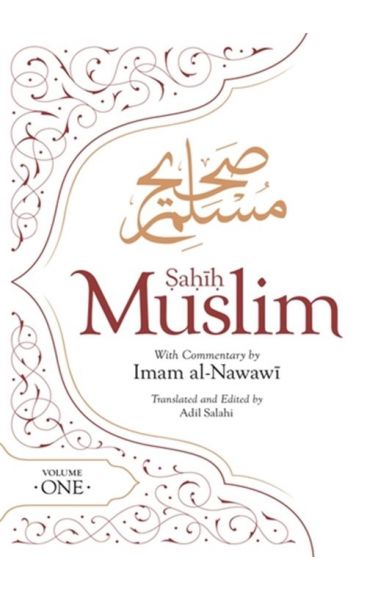 The first volume in a new translation of Sahih Muslim, the second most authentic collection of Hadith, with Imam Nawawi’s commentary.

After the Qur’an, the prophetic traditions (Hadith) are the most recognized source of wisdom in Islam. These traditions offer readers down the ages a glimpse of Prophet Muhammad’s sayings and actions. Amongst the Hadith literature, Sahih Muslim is second only to the collection of Imam Bukhari, and is recognized by scholars of history and religion for its reliability.

The hadith collection of Imam Muslim (d. 261 CE/875 AH), like that of Bukhari, has been the object of innumerable commentaries since its compilation. However, there is no doubt that one commentary stands out as the most authoritative—namely that of the great Damascene scholar and prolific author Imam al-Nawawi (d. 676 CE/1277 AH).

Imam al-Nawawi’s commentary on Sahih Muslim is one of the most highly regarded works in Islamic thought and literature, and often referred to as a super-commentary. Accepted by every sunni school of thought, and foundational in the Shafi'i school, this text, available for the first time in English, alongside the original Arabic text and translation of all the hadiths, is famed throughout the Muslim world.

From The Back Cover

Since its compilation over a thousand years ago, Sahih Muslim has been recognized by scholars as an authentic collection of Prophetic teachings second only to that of Imam Bukhari (d. 256/870). The hadith collection of Imam Muslim (d. 261/875) has had innumerable commentaries written on it down to modern times. However, there is no doubt that one commentary stands out as the most authoritative, namely that of the great Damascene scholar, Imam al-Nawawi (d. 676/1277), which in Arabic is entitled al-Minhaj Sharh Sahih Muslim ibn al-Hajjaj. This multidisciplinary commentary brings forth rich insights into the Arabic language, Qur'anic studies, Islamic law and jurisprudence, Islamic theology, Islamic spirituality and Islamic history.

The present translation by Dr Adil Salahi is the first time al-Nawawi's rich and authoritative commentary on Sahih Muslim is being made available in English. This ground-breaking project marks a significant moment for Islam in the English language. Readers can now gain access to the timeless wisdom of the Prophet (P.B.U.H) with the explanations of the ulama summarized by one of the ummah's finest scholars.

Please Note: There are 12 Volumes in this Project which will be published as and when it is ready.​

Imam Nawawi died at the young age of 44 years, leaving behind him numerous works of great efforts and knowledge.