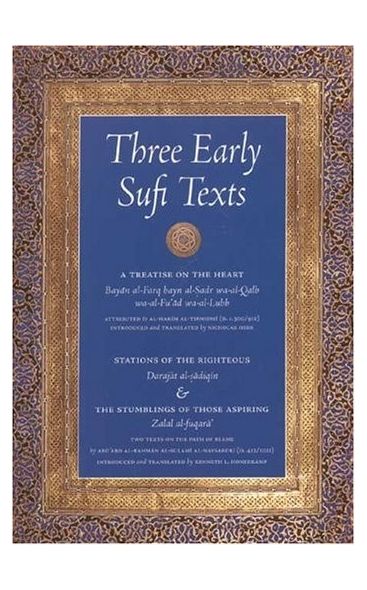 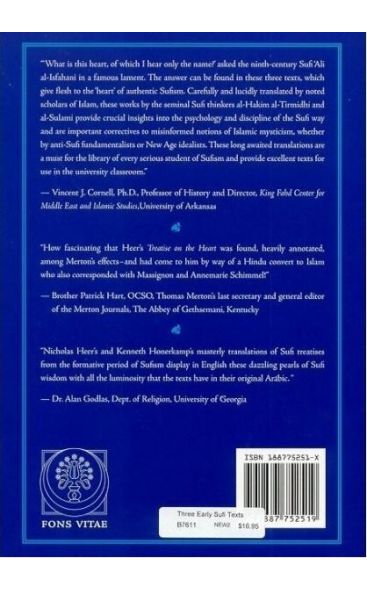 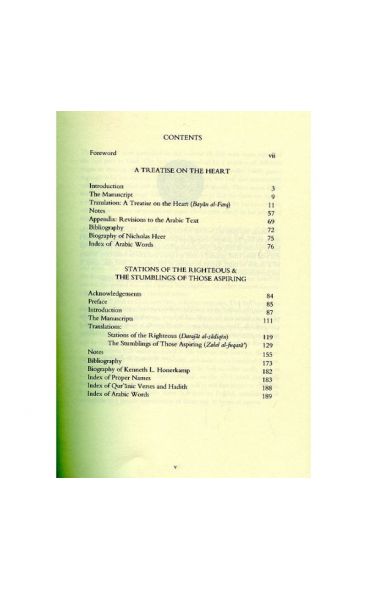 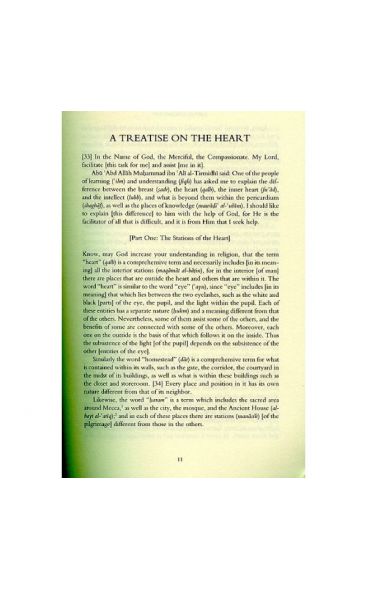 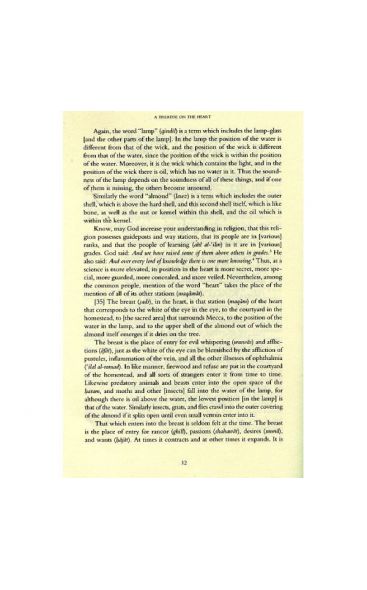 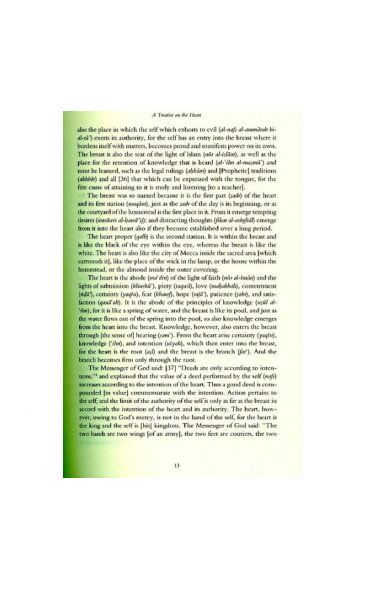 The three Sufi texts published in this volume all deal with some aspect of the Sufi path to God.

The three Sufi texts published in this volume all deal with some aspect of the Sufi path to God. The Sufi path is marked by a number of different stages or stations (maqam/maqamat) which the Sufi traveller (salik) passes through as he advances on the path.

On his way the Sufi also experiences various psychological and emotional states (hal/ahwal). These states differ from the stations through which the Sufi passes in that the states are transitory experiences granted to him by God and over which he has no control, whereas the stations are permanent stages on the path which he has achieved through his own individual effort.

The enumeration of these states and stations and discussions of the distinction between them may be found in such classical Sufi works as al-Kalabadhi's Ta`arruf, al-Sarraj's Luma`, al-Qushayri's Risalah and al-Hujwiri's Kashf al-Mahjub. There are, however, considerable differences among these writers with respect to the enumeration and description of these stations and states. The existence of such differences should not be surprising since the descriptions of the stations and states found in these works are based on knowledge gained through interior Sufi experiences rather than on knowledge gained through the external senses.

The Sufi path to God, however, is not an easy one. The Sufi's progress along the path is hindered by the machinations of the self (nafs), that is, the ego-self or what is called in the Qur'an the self that incites or exhorts to evil (al-nafs al-ammarah bi-al-su'). In order to maintain his progress along the path to God the Sufi must be able to control the ego-self by disciplining it, and by continually blaming and abasing it.

Of the three Sufi works included in this volume, the first two, Bayan al-Farq, attributed to al-Hakim al-Tirmidhi, and al-Sulami's Darajat al-Sadiqin, deal primarily with the stations and states of the Sufi traveller on the path to God. The third, al-Sulami's Zalal al-Fuqara', on the other hand, deals with the disciplining and abasement of the ego-self or self that incites to evil. We hope the publication of these three Sufi texts in English translation will contribute to a greater appreciation of Islam and its mystical aspects.

Translations of texts from the formative period of Islam are rare. Those that were done are now out of print. Translations of Tirmidhi and Sulami are even more difficult to find. The three, previously untranslated works presented here originate from the pens of two of the most eminent figures of the Khorasanian tradition, Hakim Tirmidhi (d. 300/912) and Abu ‘Abd al-Rahman al-Sulami al-Naysaburi (d. 412/1021).

These texts, dating from the formative period of Sufism, affirm the existence of an already highly developed school of Muslim psychology that provided the foundation for the transformational process referred to within multiple spiritual traditions of the spiritual journey. Hakim Tirmidhi portrays the science of the soul within the Islamic context.

In Stations of the Righteous al-Sulami deals with the inherently defective nature of the soul, and delineates the path the soul must travel towards purification and the roles it assumes on its journey.

In Stumblings of Those Aspiring al-Sulami shares with his aspirant how best to manage the itinerary and avoid the pitfalls and obstacles of this journey. These three works are relevant within the domains of human spirituality and psychology for both the specialist and the non-specialist.

Within the history of Sufism classroom these texts offer some of the earliest and most concise examples of classical Sufi methodology to appear in translation. Those committed to the study of psychology, as the science of the human soul and its states, will find within the terminology and insights offered in these works relevance, which is historical, as it is conceptual. These works also offer anyone seeking a deeper understanding of the human spirit a mirror, at once timeless and personal, of our own human nature.

"Few books remain in one’s consciousness after they have been read, this book is one of them. There are sections in the book which engrave themselves in one’s mind and are fuel for one’s spiritual aspirations.

The early Sufi texts that are contained within the book all deal with some facet of the Sufi path to God and are as follows: (i) A treatise on the heart, attributed to Al-Hakim Al-Tirmidhi, (ii) Stations of the righteous and (iii) The stumblings of those aspiring both by Abu Abd Al-Rahman Al-Sulami Al-Naysaburi.

A treatise on the heart presents a Sufi psychological system concerned with the interaction of the heart (qalb) and the self (nafs). In this system the heart is described as consisting of four parts: (i) Breast (sadr, (ii) Heart proper (qalb) (iii) Inner heart (Fu’ad) and (iv) Intellect (lubb).

The self is described as not being part of the heart but a separate entity which is located in the stomach. It’s a point worth contemplating that God put the self in a lower position vis-à-vis the heart and for a person of insight this simple fact holds a message of its own worth pondering over.

The sections that follow then detail the different aspects of the heart. Below I will take quotes from a few sections which I hope will give some indication of the matter being discussed. In the section discussing the heart the author says:

Know, may God have mercy on you, that of all God’s creation there is nothing better than a heart which has become virtuous through the light of unification (tawhid), gnosis (ma’rifah), and faith (iman), nor is there anything purer, cleaner, more pious, more sincere, nor anything more encompassing [than a heart] if God has cleansed it of impurities and undertaken its revival with the light of truth (nur al-haqq)…

The first text concludes with a description of the friends of God.

Know then, may God have mercy upon you, that the hearts of the friends of God (awliya’ Allah) are storehouses of wisdom, seats of mercy, sources of contemplation, treasuries of gnosis (ma’rifa) and houses of generosity. They are the places of God’s merciful regard, the gardens of His compassion, the vessels of His knowledge…

In the introduction to the last two texts the translator gives a fairly comprehensive overview of the teachings of the Malamatiya to which the author Al-Sulami had close links. The teachings can be summarised as attitudes and conduct whose end goal was perfect sincerity. Their foundational principle being to cultivate an awareness of the inherently defective nature of the self and a code of conduct that went along with this awareness. It’s also useful to quote Trimingham who wrote the following when describing the Malamatiya “At the foundation of the Malamati tendency is the absolute nothingness of man before God” which I think sums up their outlook concisely and accurately.

The third text is in my opinion by far the most penetrating part of the book because the insights the author provides are truly inspirational. The author quotes Abu Ali al-Juzjani who when asked about the distinguishing traits of the spiritual traveller said:

In conclusion, I believe this book imparts essential information for the spiritual traveller and shows in glorious detail the attitude and superior conduct which our forefathers possessed and which we today should aspire to. I think the translator has done a great service in making these precious texts accessible to us."

The ninth century Islamic mystic Al-Hakim al-Tirmidhi was a copious author, writing in Arabic, who lived in Central Asia. Reputedly exiled for his heretical tendencies, his version of saintship (wilaya) has since been recovered by modern scholars. His output is now considered significant for the period generally known in terms of early Sufism.

Tirmidhi was apparently born during the decade between 820 and 830 A. D. His father was a scholar of Hadith (traditions of the prophet) and a jurist; his early education appears to have been very orthodox. He was reared as a scholar of Hadith and fiqh (law), more specifically, the Hanafi school of law that was dominant in eastern territories of Islam. "The range of Tirmidhi's education did not include the non-Islamic sciences, such as Greek natural science and philosophy."

His subsequent reference to learning the use of the astrolabe, implying a knowledge of astronomy and mathematics, has been given different interpretations. "There is no trace of influence from 'natural science' in his writings." However, his general pursuit of knowledge gained him the name of al-hakim (the sage). He renounced his use of the astrolabe after being told to do so in a dream to which he attached significance.

His publications include and Arabic edition of ‘Abd al-Rahman al-Jami’s al-Durrah al-Fakhirah (Wisdom of Persia Series XIX, Tehran, 1980) and an English translation of the same work published under the same title The Precious Pearl (Albany: SUNY Press, 1979).  Other relevant publications are: ‘Abd al-Rahman al-Jami The Precious ,Pearl. Al-Jami’s al-Durrah al-Fakhirah together with his Glosses and the Commentary of ‘Abd al-Ghafur al-Lari translated with an introduction, notes, and glossary by Nicholas Heer. (Albany: State University of New York Press, 1979.)  ‘Abd al-Rahman al-Jami al-Durrah al-Fakhirah. Edited with the glosses of al-Jami and the commentaries of ‘Abd al-Ghafur al-Lari and ‘Imad al-Dawlah by N. Heer and A. Musawi Bihbahani. Wisdom of Persia Series XIV, Institute of Islamic Studies, McGill University, Tehran Branch. Tehran, 1358/1980.