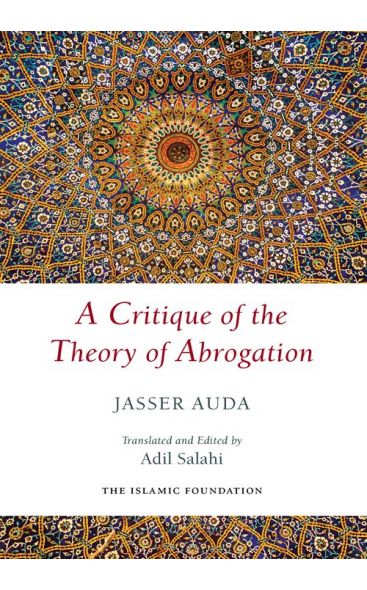 A Critique of the Theory of Abrogation

The book aims to present to the reader and students of Islamic studies the opposite view that what is said to be abrogated could still address some practical situations.

The very idea of abrogation sounds fascinating to many Muslims. Through Islamic history, the study of abrogation acquired special importance as a distinct discipline of Qur’anic studies. Books were devoted to explaining which Qur’anic verses abrogated which earlier ones. But is there really a sound argument that abrogation occurred during the Prophet’s lifetime, with Qur’anic revelations cancelling earlier rulings totally, so as to make them invalid for the rest of time?

This book critically examines such an understanding of abrogation theory. It aims to present to the reader and students of Islamic studies the opposite view that what is said to be abrogated could still address some practical situations.

JASSER AUDA is a scholar who specializes in Islamic law and legal theory. A member of fiqh councils in Europe, America, and Asia, early in his life, he memorized the Qur’an and attended study circles of al-Azhar in Cairo, Egypt. He holds a PhD in the philosophy of Islamic law from the University of Wales, UK, and a PhD in systems analysis from the University of Waterloo, Canada.

Dr. Jasser Auda had volunteered as Imam in Egypt and Canada, and has developed a multi-disciplinary academic background through writing two PhD theses on the Philosophy of Islamic Law, and Systems Analysis and Design, at the University of Wales, UK, and the University of Waterloo, Canada, respectively.

Dr. Auda is a Visiting Lecturer to a number of academic institutes in Canada, UK, Egypt, and India.