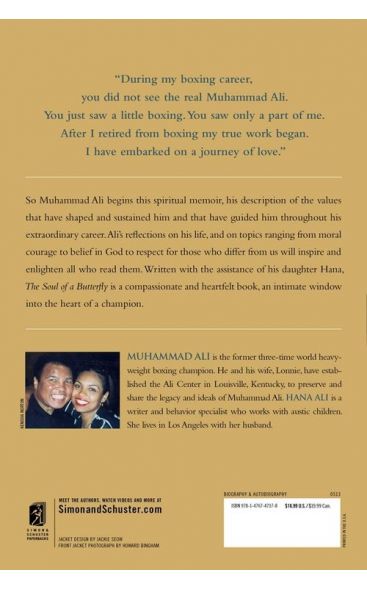 The Soul of a Butterfly: Reflections on Life's Journey

Former boxing legend Muhammad Ali, one of the best-known and best-loved celebrities and an international good-will ambassador, offers inspiration and hope as he describes the spiritual philosophy that sustains him.

Handbook of A Healthy Muslim Marriage:...

Former boxing legend Muhammad Ali, one of the best-known and best-loved celebrities and an international good-will ambassador, offers inspiration and hope as he describes the spiritual philosophy that sustains him.

"During my boxing career, you did not see the real Muhammad Ali. You just saw a little boxing. You saw only a part of me. After I retired from boxing my true work began. I have embarked on a journey of love."

So Muhammad Ali begins this spiritual memoir, his description of the values that have shaped and sustained him and that continue to guide his life. In The Soul of a Butterfly the great champion takes readers on a spiritual journey through the seasons of life, from childhood to the present, and shares the beliefs that have served him well.

After fighting some of the fiercest bouts in boxing history against Joe Frazier and George Foreman, today Muhammad Ali faces his most powerful foe—outside the boxing ring. Like many people, he battles an illness that limits his physical abilities, but as he says, "I have gained more than I have lost....I have never had a more powerful voice than I have now." Ali reflects on his faith in God and the strength it gave him during his greatest challenge, when he lost the prime years of his boxing career because he would not compromise his beliefs. He describes how his study of true Islam has helped him accept the changes in his life and has brought him to a greater awareness of life's true purpose. As a United Nations "Messenger of Peace," he has traveled widely, and he describes his 2002 mission to Afghanistan to heighten public awareness of that country's desperate situation, as well as his more recent meeting with the Dalai Lama.

Ali's reflections on topics ranging from moral courage to belief in God to respect for those who differ from us will inspire and enlighten all who read them. Written with the assistance of his daughter Hana, The Soul of a Butterfly is a compassionate and heartfelt book that will provide comfort for our troubled times.

Muhammad Ali: First known for boxing, and later for his conscientious stance on the Vietnam War draft, Ali focused his awareness of the needs of his fellow citizens and those in the developing world to direct his good work. In addition to challenging racial and religious preconceptions at home, he served as a symbol of hope and a catalyst for constructive international dialogue, delivered sorely-needed medical supplies to an embargoed Cuba, provided more than 22 million meals to the world’s hungry, and helped secure the release of fifteen U.S. hostages from Iraq during the first Gulf War. The United Nations named him a Messenger of Peace, and he was awarded the Presidential Medal of Freedom, as well as Amnesty International’s Lifetime Achievement Award. In September 2012, he was the recipient of the prestigious National Constitution Center Liberty Medal.

Among his many projects, Muhammad cofounded the Muhammad Ali Center with his wife Lonnie, and contributed substantially to the awareness and research efforts regarding Parkinson’s disease.

Hana Ali is a writer and behavior specialist who work with austic children. She lives in Los Angeles with her husband.