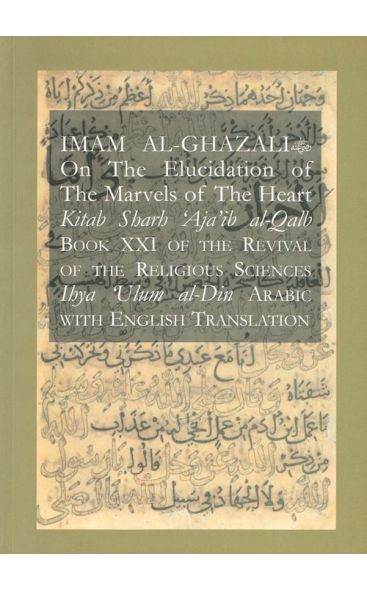 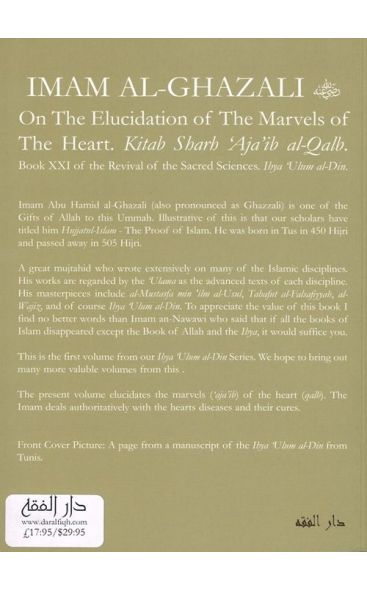 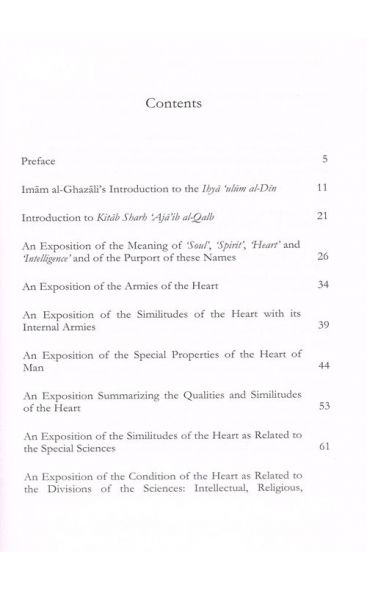 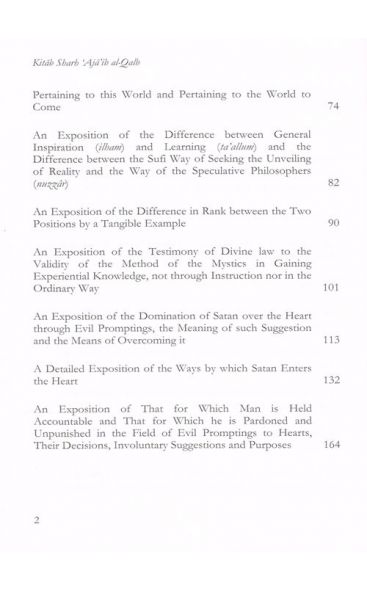 On The Elucidation of The Marvels of The Heart

Imam Abu Hamid al-Ghazali (also pronounced as Ghazzali) is one of the Gifts of Allah to this Ummah. Illustrative of this is that our scholars have titled him Hujjatul-Islam - The Proof of Islam. He was born in Tus in 450 Hijri and passed away in 505 Hijri.

A great mujtahid who wrote extensively on many of the Islamic disciplines. His works are regarded by the 'Ulama as the advanced texts of each discipline. His masterpieces include al-Mustasfa min 'ilm 'al-Usul, Tahafut al-Falsafiyyah, al-Wajiz and of course Ihya 'Ulum al-Din. To appreciate the value of this book I find no better words than Imam an-Nawawi who said that if all the books of Islam disappeared except the Book of Allah and the Ihya, it would suffice you.

This is the first volume from our Ihya 'Ulum Al-Din Series. We hope to bring out many more Subic volumes from this.

The present volume elucidates the marvels ('Aja'ib) of the heart (Qalb). The Imam deals authoritatively with the hearts diseases and their cures. - Note From Publisher

This is a classic Sufi manual on the 'science of the heart.'

For Sufis, the 'heart' is more than a piece of flesh, it is the seat of the soul, and holds the key to the intimate relationship which exists between soul and body.

Each heart, according to this traditional wisdom accumulated over centuries of spiritual practice and experience, possesses four qualities:

The latter represents our true origin and potential, and by use of the intelligence and spiritual practices enabled by God's grace, we may restore equilibrium to our inner core.

'Unquestionably, by the remembrance of Allah hearts are assured.​'
(Qur'an 13:28)

Abu Hamid Muhammad Al-Ghazali was born in 450 AH (1058 A.D). in Persia. He graduated from the Nizamia Madrassah at Nishapur, with distinction.a very famous educational institution in Nishapur.

Later he was appointed as a teacher at the Nizamia College in Baghdad, where he proved very successful in imparting knowledge to the scholars under his care. This valuable gift of sustaining interest of his pupils and passing on his knowledge to them made him so famous that students from all parts of the country flocked to study under him.

Imam al-Ghazali was fondly referred to as the "Hujjat-ul-lslam", Proof of Islam.

He is honored as a scholar and a saint by learned men all over the world. Al-Ghazali is generally acclaimed as the most influential thinker of the Classical period of Islam, in his autobiography The Deliverance from Error, the Imam describes his education and his intellectual crisis, which left him so paralyzed by doubt that he he gave up his academic pursuits.