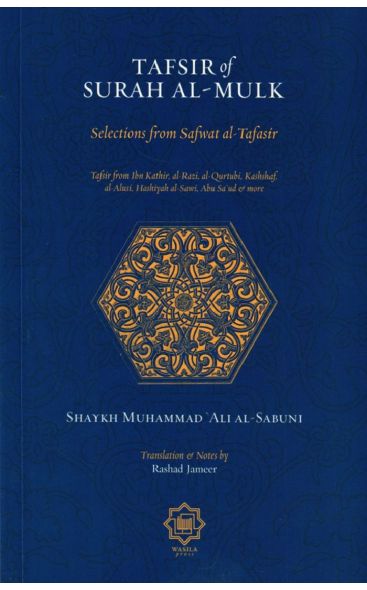 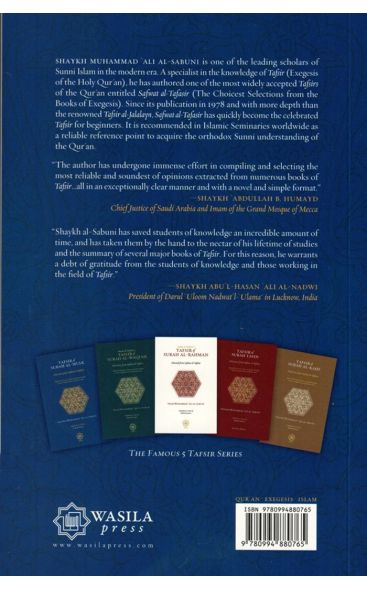 This book is recommended in Islamic Seminaries worldwide as a reliable reference point to acquire the orthodox Sunni understanding of the Quran.

Imam Muhammad 'Ali Al-Sabuni is one of the leading scholars of Sunni Islam in the modern era. A specialist in the knowledge of Tafsir (Exegesis of the Holy Quran), he has authored one of the most widely accepted Tafsirs of the Qur’an entitled Safwat al-Tafasir (The Choicest Selections from the Books of Exegesis).

Since its publication in 1978 and with more depth than the renowned Tafsir al-Jalalayn, Safwat al-tafasir has quickly become the celebrated tafsir for beginners.

It is recommended in Islamic Seminaries worldwide as a reliable reference point to acquire the orthodox Sunni understanding of the Quran.

Shaykh al-Sabuni says about his Tafsir: "It is comprehensive, based on both narrated reports and rational argument, based on the most authentic well known tafasir such as al-Tabari, al-Kashshaf, Ibn Kathir, al-Bahr al-Muhit and Ruh al-Ma’ani. It is written in a simple style that is easy to understand, paying attention to literary style and linguistic form.... I have called my book Safwat al-Tafasir (The Best of Tafasir) because it combines the best of the major detailed tafasir in a brief, organized and clear fashion."

Muhammad Ali Al-Sabuni one the prominent scholars of Ahl-e-Sunnah Wal-Jama'ah, and a possessor of a great knowledge of Qur'an in the modern age. He was born in the city of Halab, Al-Syria in 1930 AD and brought up in the same city. Started learning of beginning knowledge on the hand of his Father Sheikh Jamil Al-Sabuni.

He continued in Halab till he passed primary & middle school in 1949 AD. After that, He was sent for higher education by the minister of Awqaf (endowment) to Al-Azhar University, Cairo, Egypt, where he got Certificate of Kulliyah-Al-Sharia in 1952 AD.

His activities are unable to be counted on fingers or on a page. In Short, He gave Dars-e-Qur'an daily in Masjid al-Haram in Makkah, and one day of a week in Madinah al-Munawwarah, Specially during the Hajj he used to sit in Makkah for ehtiqaaf.

He has many writings in Arabic which have been translated into different languages as English, Persian & Turkish.