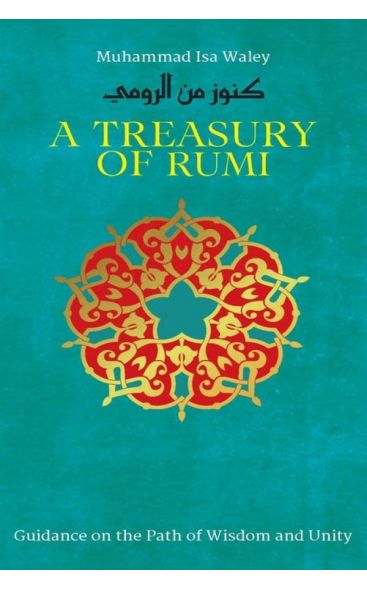 A TREASURY OF RUMI

There are many sides to Jalal al-Din Rumi – scholar, preacher, saint, mystic, love poet, didactic poet, and spiritual master – but the version of him that became ‘the best-selling poet in North America’ lacks authenticity.

Al-Ghazali: The Book of Contemplation (Book 39...

This new anthology of Rumi’s teachings is freshly translated and supplemented with commentaries, and also includes selected texts in Persian. The aim is to bring readers closer to his work's true, traditional meaning – and to the man himself as a great Islamic scholar, teacher and saint.

Besides illustrating the traditional basis of Rumi’s teachings, this Treasury displays his unique genius as one of the world’s greatest religious writers, whose voice speaks as clearly and compellingly today as in the 7th/13th century.

'Everyone has, in their view, become my close friend
but they have not sought out the secrets within me.’

Dr. Muhammad Isa Waley is Lead Curator for Persian and Turkish Collections at the British Library, London. His main research specialisations are the palaeography, codicology, illumination and cataloguing of Islamic manuscripts; and the classical verse and prose literature of Islamic spirituality.

Among the numerous works edited by Dr. Waley are Islamic Codicology: an Introduction to the Study of Manuscripts in Arabic Script; the English translation of Tafsir al-Jalalayn; several works by Sheikh Muhammad Mutawalli al-Sha’rawi; the Integrated Encyclopedia of Qur’an; and the Kitab al-Adhkar of Imam al-Nawawi.

Jalal ad-Din Muhammad Rumi, Mevlana or Mawlānā and more popularly in the English-speaking world simply as Rumi (30 September 1207 – 17 December 1273), was a 13th-century Persian poet, jurist, theologian, and Sufi mystic. Rumi's importance is considered to transcend national and ethnic borders. Iranians, Turks, Cappadocian Greeks, Afghans, Tajiks, and other Central Asian Muslims as well as the Muslims of South Asia have greatly appreciated his spiritual legacy in the past seven centuries. His poems have been widely translated into many of the world's languages and transposed into various formats. He has been described as the "most popular poet in America" and the "best selling poet in the US".

Rumi's works are written mostly in Persian, though a few written in the lower status vernacular (Cappadocian Greek) of the region in which he settled are preserved. His Mathnawi remains one of the purest literary glories of Persia, and one of the crowning glories of the Persian language. His original works are widely read today in their original language across the Persian-speaking world (Iran, Tajikistan, Afghanistan and parts of Persian speaking Central Asia and the Caucasus). Translations of his works are very popular, most notably in Turkey, Azerbaijan, the United States and South Asia. His poetry has influenced Persian literature as well as Turkish, Punjabi, Urdu and some other Iranian, Turkic and Indic languages that have been influenced by Persian, e.g. Pashto, Ottoman Turkish, Chagatai and Sindhi.