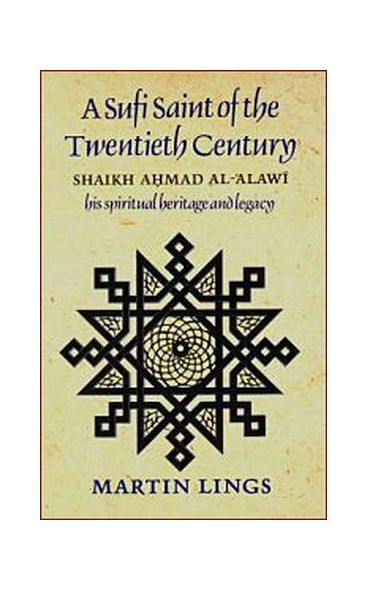 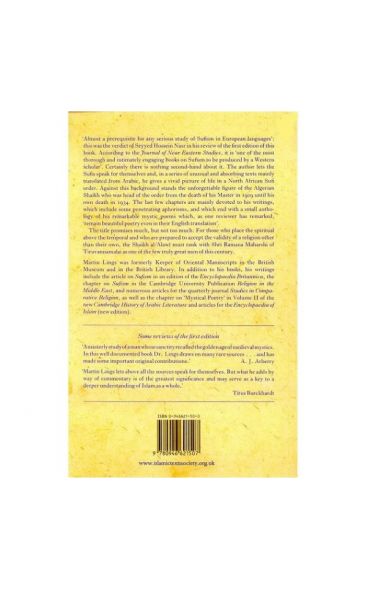 A Sufi Saint of the Twentieth Century

'Almost a prerequisite for any serious study of Sufism in European languages': this was the verdict of Seyyed Hossein Nasr in his review of the first edition of the book. According to the Journal of Near Eastern Studies, it is 'one of the most thorough and intimately engaging books on Sufism to be produced by a Western scholar'. Certainly there is nothing second-hand about it. The author lets Sufis speak for themselves and, in a series of unusual and absorbing texts mainly translated from Arabic, he gives a vivid picture of life in a North African Sufi order. Against this background stands the unforgettable figure of the Algerian Shaikh who was head of the order from 1909 until his death in 1934. The last few chapters are mainly devoted to his writings, which include some penetrating aphorisms, and which end with a small anthology of his remarkable mystic poems.

Martin Lings, formerly Keeper of Oriental Manuscript in the British Museum and the British Library, is the author of three works on Islamic mysticism, Muhammad: His Life Based on the Earliest Sources, What is Sufism? and The Book of Certainty, all published by The Islamic Texts Society.

‘A masterly study of a man whose sanctity recalled the golden age of medieval mystics. In this well documented book Dr Lings draws on many rare sources...and has made some important original contributions.’ A. J. Arberry

‘What Martin Lings adds by way of commentary is of the greatest significance and may serve as a key to a deeper understanding of Islam as a whole.’ Titus Burckhardt

The narrative which follows is by Dr Marcel Carret. It speaks for itself and needs no introduction; and having read it, the reader will no doubt understand why I have chosen to begin with it rather than with anything else, although at its outset the Shaikh is already fifty years old.

‘I met the Shaikh Al-Alawi for the first time in the spring of 1920. It was not a chance meeting, for I had been called in to him in my capacity as doctor. It was then only a few months since I had started a practice at Mostaganem.

‘What could have prompted the Shaikh to consult a doctor, seeing that he attached so little importance to the petty misfortunes of the flesh. And why had he chosen me, a newcomer, from among so many others?

‘It was from him himself that I eventually learned the answers to these questions: not long after my arrival at Mostaganem, I had set up a clinic in the Arab town of Tigitt exclusively for the use of Moslems, and three times a week I gave consultations there for a minimum fee. Moslems have an instinctive repugnance for State-organized dispensaries, and my clinic, which was set up in their very midst and arranged to suit their tastes and customs, was a success. Echoes of this came to the ears of the Shaikh.

‘His attention was attracted by this initiative on the part of a newly arrived French doctor who, unlike most Europeans, apparently did not look down on Moslems from the heights of a disdainful pride. Without my knowing it, and without the least attempt at investigation on his part, he was benevolently informed by his disciples as to how I looked, What I did, my movements, my way of treating the sick and my sympathetic attitude towards Moslems. As a result, the Shaikh Al-‘Alawi already knew me quite well when I was still ignorant of his very existence. A rather serious attack of influenza which he had during the spring of 1920 made him decide to send for me.

‘From my first contact with him I had the impression of being in the presence of no ordinary personality. The room I was shown into, like all rooms in Moslem houses, was without furniture. There were simply two chests which, as I found out later, were full of books and manuscripts. But the floor was covered from end to end with carpets and rush mats. In one corner was a rug-covered mattress, and here, with some cushions at his back, sitting straight upright, cross-legged, with his hands on his knees, was the Shaikh, in a motionless hieratic attitude which seemed at the same time perfectly natural.

‘The first thing that struck me was his likeness to the usual representations of Christ. His clothes, so nearly if not exactly the same as those which Jesus must have worn, the fine lawn head-cloth which framed his face, his whole attitude—everything conspired to reinforce the likeness. It occurred to me that such must have been the appearance of Christ when he received his disciples at the time when he was staying with Martha and Mary.

‘My surprise stopped me for a moment on the threshold. He too fixed his eyes on my face, but with a far-away look, and then broke the silence by asking me to come in, with the usual words of welcome. His nephew, Sidi Muhammad, acted as his interpreter, for although the Shaikh understood French well he had some difficulty in speaking it, and in the presence of a stranger he made as if he did not know it at all.

‘I asked for some sandals to cover my shoes, so as not to defile the carpets and the mats, but he said that this was quite unnecessary. A chair was brought for me, but it seemed so ridiculous in such surroundings that I declined it, saying I would rather sit on a cushion. The Shaikh smiled almost imperceptibly, and I felt that by this simple gesture I had already gained his sympathy.

‘His voice was gentle, somewhat subdued. He spoke little, in short sentences, and those about him obeyed in silence, waiting on his least word or gesture. One felt that he was surrounded by the deepest reverence.

‘I already knew something of Moslem ways, and realizing that I had to do something with someone who was not just ‘anyone’, I was careful not to broach too abruptly the subject for which I had been called in. I let the Shaikh question me, through Sidi Muhammad, about my stay in Mostaganem, what had brought me there, the difficulties I had met with, and how far I was satisfied.

‘During this conversation a young disciple had brought in a large brass tray with some mint-flavoured tea and some cakes. The Shaikh took nothing, but invited me to drink when the tea had been served, and himself pronounced the “Bismillah” (in the Name of God) for me as I raised the cup to my lips.

‘It was only after all this usual ceremony was over that the Shaikh decided to talk to me about his health. He said that he had not sent for me to prescribe medicines for him; certainly, he would take medicine, if I thought it was absolutely necessary and even if I thought it would help him, but he had no desire to do so. He simply wanted to know if the illness he had contracted a few days previously was a serious one. He relied on me to tell him quite frankly, and without keeping anything back, what I thought of his condition. The rest was of little or no importance.

Martin Lings (1909–2005), also known as Abu Bakr Siraj ad-Din, was an English writer, a student of Frithjof Schuon and a renowned British Shakespearean scholar, with degrees in English and Arabic from London University and Oxford University. At Oxford, he studied English under C. S. Lewis, who later became a close friend. Lings taught at several European universities and the University of Cairo and served as the keeper of Oriental manuscripts for the British Museum and the British Library. His friendship and similar beliefs with philosophers René Guénon and Frithjof Schuon inspired Lings to convert to Islam. He went on to become an influential member of Western Muslim society, participating in several international Islamic councils and conferences, including acting as consultant to the World of Islam Festival Trust. He is the author of twelve books on religion and spirituality.