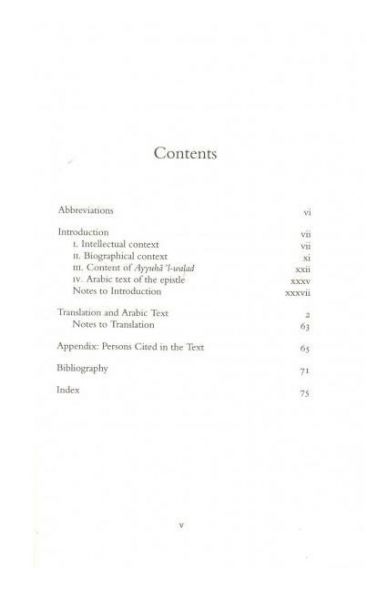 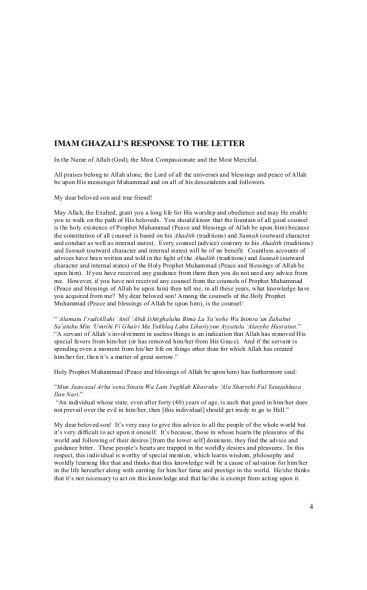 Al-Ghazali Letter to a Disciple

An old disciple of al-Ghazali had studied the Islamic sciences, including the many works of his master, for most of his life. Faced with the proximity of death, he turns again to his master this time asking for a summary of all his teachings, and Letter to a Disciple is al-Ghazali’s response.

'Work for your terrestrial life in proportion to your location in it, and work for your afterlife in proportion to your eternity in it.’ This is part of the advice that the great theologian and mystic Abu Hamid al-Ghazali (1058-1111 AD) put down in his Letter to a Disciple. An old disciple of al-Ghazali had studied the Islamic sciences, including the many works of his master, for most of his life. Faced with the proximity of death, he turns again to his master this time asking for a summary of all his teachings. Letter to a Disciple is al-Ghazali’s response. The emphasis in this short treatise is on religious and spiritual  and on putting into practice the knowledge that one has acquired. Letter to a Disciple can be considered as the last testament of he who is regarded as Hujjat al-Islam, the ‘Proof of Islam’.

This new translation is presented here as a bilingual, English-Arabic edition.

IN THE NAME OF GOD, the Infinitely Good, the Merciful.

Praise belongs to God, the Lord of the worlds, and the ‘outcome belongs to the God-conscious,’ and blessings and peace be upon His Prophet Muhammad and all his family. Know that one of the advanced students devoted himself to the service of the master, the Imam, the Ornament of Religion and Proof of Islam, Abu Hamid ibn Muhammad al-Ghazali(may God sanctify his spirit) and occupied himself with the acquisition and study of knowledge under him, until he mastered the details of the sciences and filled out the good qualities of the soul. Then one day he considered his situation, and it occurred to him, ‘I have studied various kinds of science, and I have spent my life learning and mastering them. I now ought to find out which kind will be of use to me on the morrow, to keep me company in my grave, and those which are not of use to me, so that I may give them up. As God’s Messenger (God bless him and give him peace) said, ‘O God, I take refuge in Thee from knowledge which is not useful!’ This thought persisted to the point that he wrote to the honourable master, the Proof of Islam, Muhammad al-Ghazali (may God the Exalted be merciful to him), seeking a ruling, asking questions, and requesting both advice and a prayer, ‘even though the works of the master such as The Revival [ of the Religious Sciences (Ihya’ ulum al-din)] and others contain the answers to my questions, what I want is for the master to write down what I need in a few pages to be with me for the rest of my life, and I will act in accordance with what is in them during my term, if God the Exalted wills.’ So the master wrote him this message in reply, and God knows best.

‘Know O beloved and precious disciple—may God prolong your days in obedience to Him and travel with you on the path of those He loves—that public advice should be quoted from the goldmine of messenger-hood [the Prophet]. If you have received advice from him, what need do you have  my advice? And if you have not received it, then tell me what you have achieved in these years gone-by!

O disciple, included in what God’s Messenger (God bless him and give him peace) advised his community, is his statement, ‘An indication of the withdrawal of God the Exalted from the worshipper is his busying himself with what does not concern him, and if an hour of a man’s life slips by in other than that for which he was created in the way of worship, then it is proper that his affliction be protracted. Whoever passes forty without his virtue overpowering his vice, let him get ready for hellfire!’ This advice contains enough for people of knowledge.

Imam Abu Hamid Muhammad al-Ghazali (450/1058-505/1111) is widely known by the honorific, 'the Sultan of the Saints () of Allah'. In the history of the Saints of Islam, Shaikh Abd al-Qadir stands out as being unique, in the broad scope of perfection that includes his lineage, his complete development, piety, knowledge of the religion and adherence to the Sacred Law (Shariah), his intimate and direct knowledge of the Divine, and his establishment by the Lord of All the Worlds at the level of Reality (Haqiqa). Shaikh 'Abd al-Qadir lived almost a thousand years ago, but his words transcend the time and place in which they were recorded to span the centuries without difficulty.

He is justly described as a "towering figure" in the history of Islam. He was born in the Iranian town of Tus, studied Islamic law and theology at the Seljuq college in Nishapur, and became a distinguished professor at the famous Nizamiyya University in Baghdad.

Despite his glittering success, he was inwardly dissatisfied, so he abandoned his career for the life of hardship, abstinence, and devotion to worship. During ten years of wandering, he experienced a spiritual transformation, in which the Truth came to him at last, as something received rather than acquired.

Dr. Tobias Mayer is a Research Associate in the  Studies Unit at The Institute of Ismaili Studies, London, where he teaches courses on Sufism and tafsir. After completing his undergraduate degree in Indian Studies at the University of Cambridge, he went on to study Medieval Arabic thought at the University of Oxford, where he wrote his doctoral thesis on the Book of Allusions (Isharat) by the major Persian philosopher Ibn Sina. In 2001, in conjunction with Professor Wilferd Madelung, he published a critical edition and translation of Shahrastani’s Kitab Musara‘at al-Falasifa, entitled Struggling with the Philosopher: A Refutation of Avicenna’s Metaphysics (2001). Until 2003, Toby was a lecturer in Islamic Studies at the School of Oriental and African Studies, University of London, where he taught courses in Islamic philosophy and mysticism. He has also worked for the Al-Furqan Islamic Heritage Foundation and on various documentary film projects in India, Indonesia and other parts of the Muslim world.