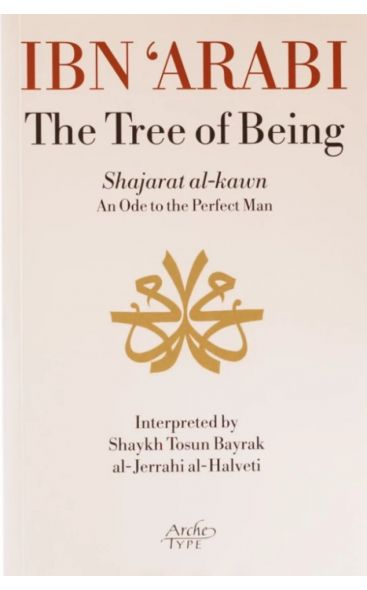 The Tree of Being: An Ode to the Perfect Man

The Tree of Being (Shajarat al-Kawn in Arabic) is a work by Ibn Arabi, interpreted by Shaykh Tosun Bayrak.

The Tree of Being (Shajarat al-Kawn in Arabic) is a work by Ibn Arabi, interpreted by Shaykh Tosun Bayrak who also includes here two other short works. Ibn Arabi (1165-1240) knew and influenced the great men of his time, including Ibn Rushd (Averroes), Jalaluddin Rumi and Suhrawardi, and his influence spread beyond the Islamic world to medieval Europe. Dante shows the influence of Ibn Arabi in the Divine Comedy for example.
The book has four sections:

Muhyiddin ibn Arabi (25 July 1165 – 8 November 1240) was an Arab Andalusian Sufi mystic and philosopher. He is renowned by some practitioners of Sufism as "the greatest master" and also as a genuine saint. Ibn ‘Arabī’s intellectual training began in Seville in 578 AH. Most of his teachers were the clergy of the Almohad era and some of them held the official posts of Qadir or Khatib. His spiritual mentor in Fes was Mohammed ibn Qasim al-Tamimi.

Later in 604 AH he returned to Mecca where he continued to study and write, spending his time with his friend Abū Shujā bin Rustem and family, including the beautiful Niẓām (II, 376; Hirtenstein 181). The next 4 to 5 years of Ibn ‘Arabī’s life were spent in these lands and he also kept travelling and holding the reading sessions of his works in his own presence.

Sheikh Tosun Bayrak al-Jerrahi al-Halveti (Istanbul: 1926) is an author, translator and Sufi. He served as a government official in Ankara, Honorary Consul of Turkey in Morocco and is the Sheikh of the Jerrahi-Halveti Order in America. He studied Biological Sciences at Robert College, Istanbul; Art, Architecture, and Art History in the Studios of Bernard Leger and Andre Lhote in Paris; Architecture at the University of California, Berkeley; and History of Art at the Courtauld Institute of Art, London. He received a Masters in Fine Arts from Rutgers University.

A retired professor of art and art history from Fairleigh Dickinson University, New Jersey, he has exhibited widely in the United States and is also a Guggenheim fellow. He retired from the art world in the 1970s and devoted his life to the study and teaching of Islam and Sufism. In 1970 Bayrak met Muzaffer Ozak Ashki al-Jerrahi who became his teacher. Bayrak is now a Sheikh of the Helveti-Jerrahi order residing near the Jerrahi Order of America mosque in Spring Valley, New York. He has been spiritual guide of the Jerrahi Order of the Americas, (the primary Western branch of the Halveti-Jerrahi Order of Dervishes) since 1977. Sheikh Tosun Bayrak has translated dozens of books on Islamic spirituality, but he is particularly known for his efforts on the works of the Sufi mystic Ibn Arabi.