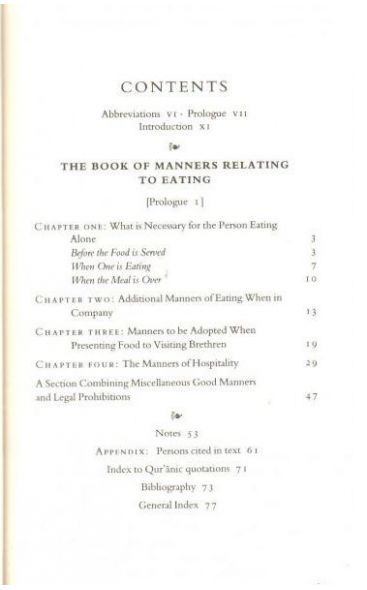 Al-Ghazali on the Manners Relating to Eating

Al-Ghazali's "On the Manners Relating to Eating" is the eleventh chapter of the Revival of the Religious Sciences, which is widely regarded as the greatest work of the Muslim spirituality.

Al-Ghazali on the manners relating to eating is the eleventh chapter of the Revival of the Religious Sciences which is widely regarded as the greatest work of the Muslim spirituality. This volume begins the section dealing with man and society, and the norms of daily life. While concentrating on a daily activity, eating, al-Ghazali presents the importance of aligning every aspect of one’s life with religion and spirituality. Referring extensively to the example of the Prophet and to early Muslims, al-Ghazali illustrates how the simple activity of eating can encourage numerous virtues which are themselves necessary for the remainder of the spiritual life.

The section of Al-Ghazali on the manner relating to eating are divided into what a person must uphold when eating alone, how a person must conduct himself when eating in company and the manner of hospitality. Through these sections, al-Ghazali also discusses lawful and unlawful foods and practices, cleanliness, fasting, general health issue, contentment with little and generosity.

Davies, referred to as “the leading Arabic-English translator of our time” by the late Edward Said, has translated more than twenty-five volumes of short stories, novels, plays, and poetry, and was the first to translate the work of Nobel laureate Naguib Mahfouz. He is also interested in Islamic studies and is co-translator of three volumes of Prophetic Hadith. He has also written a number of children’s books adapted from traditional Arabic sources, including a collection of his own short stories, Fate of a Prisoner, which was published in 1999.

Born in 1922 in Vancouver, Canada to English parentage, Davies spent his childhood in Sudan, Egypt, Uganda, and Kenya, and then was sent to England at age 12. Davies studied Oriental languages at Cambridge, and has lectured translation and English literature at several universities across the Arab World. In 2006, he published his memoirs. In 2007, he was awarded the Sheikh Zayed Book Award "Culture Personality of the Year", a valued at about $300,000.