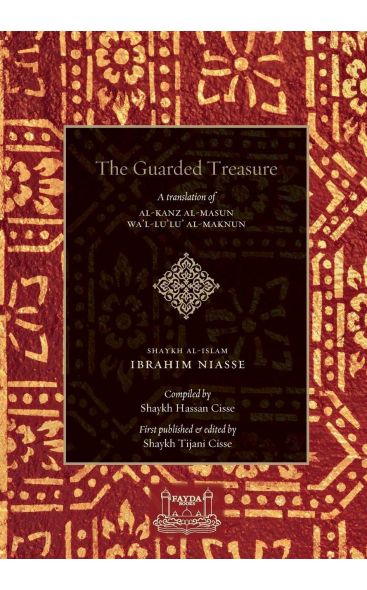 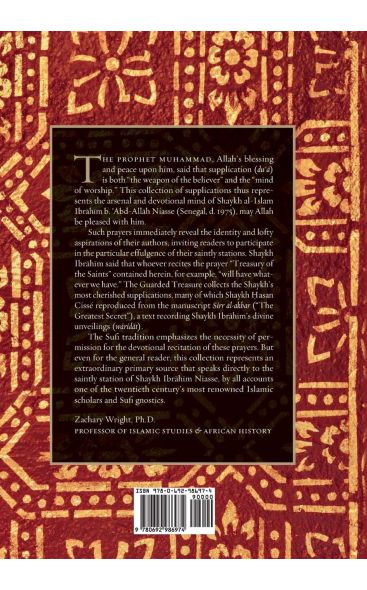 The collection of Shaykh Ibrahim Niass's most cherished supplications, many of which Shaykh Hassan Cisse reproduced from the manuscript Sirr al-Akbar (The Greatest Secret), a text recording Shaykh Ibrahim's divine unveilings.

From The Back Cover

The Prophet Muhammad, Allah's blessing and peace upon him, said that supplication (du'a) is both "the weapon of the believer" and the "mind of worship." This collection of supplications thus represents the arsenal and devotional mind of Shaykh al-Islam Ibrahim b. 'Abd-Allah Niasse (Senegal, d. 1975), may Allah be pleased with him.

Such prayers immediately reveal the identity and lofty aspirations of their authors; inviting readers to participate in the particular effulgence of their saintly stations. Shaykh Ibrahim Niasse said that whoever recites the prayer "Treasury of the Saints" contained herein, for example. "will have whatever we have." The Guarded Treasure collects the Shaykh's most cherished supplications, many of which Shaykh Hasan Cisse reproduced from the manuscript Sirr al-akbar ("The Greatest Secret"), a text recording Shaykh Ibrahim's divine unveilings (Waridat).

The Sufi tradition emphasizes the necessity of permission for the devotional recitation of these prayers. But even for the general reader, this collection represents an extraordinary primary source that speaks directly to the saintly station of Shaykh Ibrahim Niasse, by all accounts one of the twentieth century's most renowned Islamic scholars and Sufi gnostic's.

Shaykh al-Islam Ibrahim Niasse (1900-1975) was West Africa’s most renowned Islamic scholar in the twentieth century. His followers numbered in the millions and comprised the largest single Muslim movement in West Africa (Hiskett, 1984). He was also well-known among the ulama and leaders of the broader Muslim world and a member of such organizations as the Muslim World League (Rabitat al-‘Alam al-Islami based in Saudi Arabia, of which he served as Vice President), the World Muslim Congress (Mutamar al-‘Alam al-Islami; Karachi, Pakistan), the Islamic Research Assembly (Majma’ al-Buhuth al-Islamiyya; Egypt) and the High Council of Islamic Affairs (Majlis al-‘Ala li al-Shu’un al-Islamiyya; Egypt). Following a trip to Cairo, Egypt, in 1961, he became widely known as “Shaykh al-Islam” after having led the Friday prayers in the prestigious Azhar mosque.

Shaykh Ibrahim Abdullah Niasse was born in rural Senegal, the son al-Hajj Abdullah Muhammad Niasse. Al-Hajj Abdullah (d. 1922) represented the culmination of a long line of Islamic scholars in the Senegambia region, and was himself a well-traveled and consummate shaykh, attracting students from all around the region as far away as Mauritania. Shaykh Ibrahim was educated primarily at the hands of his father, with full access to his father’s extensive library. Shaykh Ibrahim mastered at an early age from his father the full range of Islamic sciences: the Qur’an and its interpretation, the Hadith and their explanation, jurisprudence and Sufism.

Shaykh Ibrahim was the best example of a Sufi according to the description “The Sufi is the son of his hour (ibn waqtihi).” He will respond to the needs of the time. At every moment he is dealing with the requirements of that moment. The Muslim who is greatest in understanding is he who submits to the rule of his hour. That is, he gives everything the position it requires in action and speech. He is a person moving with time in a circle. He does not attempt to stop time, not to become stagnant in it, nor to regress in it. His effort is aimed at continually moving forward. In the season of Ramadan he reads Qur’an and Hadith and presents their explanations. In the season of Hajj, he expounds the virtues of the Muslim pilgrimage. At the time of Mawlid, he recites the Prophet’s Sira or Biography.

Zachary V. Wright, Ph.D. (2010), Northwestern University, is Assistant Profes-sor of History and Religious Studies at Northwestern University in Qatar. His previous publications have been in the field of African Islam, Sufism, and Islam-ic education. He translated a number of West African Arabic texts, and was the leading translator for Ibrahim Niasse's renowned work on Sufism, the Kashif al-Ilbas or Removal of Confusion.