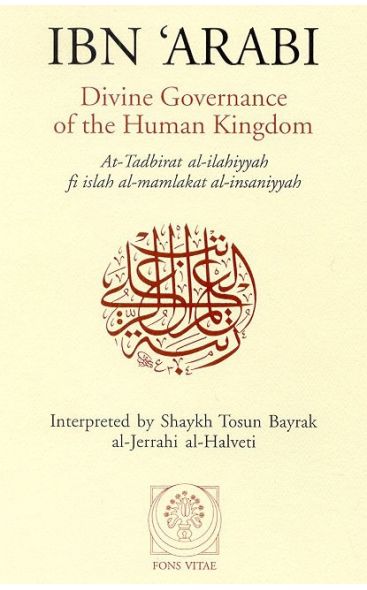 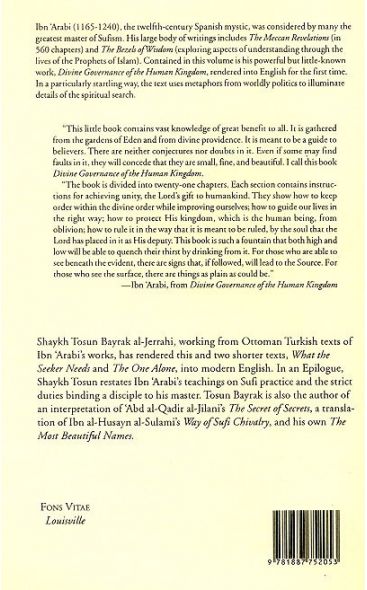 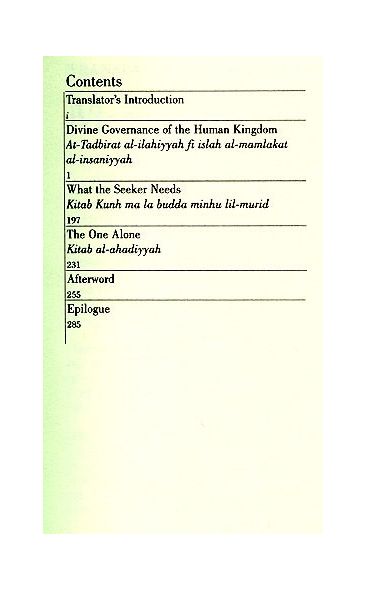 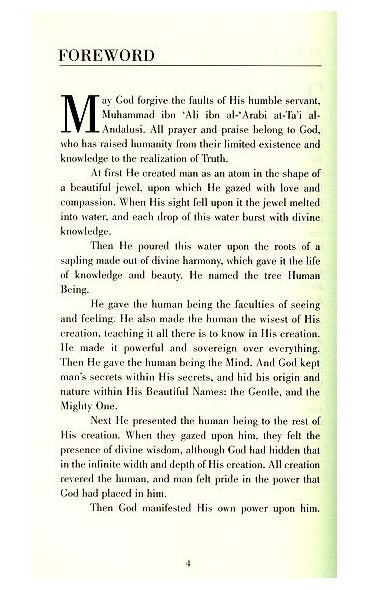 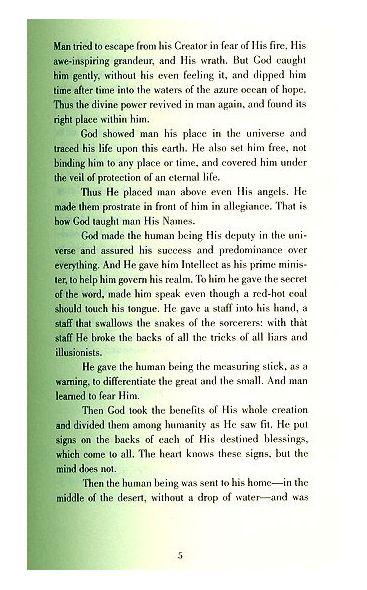 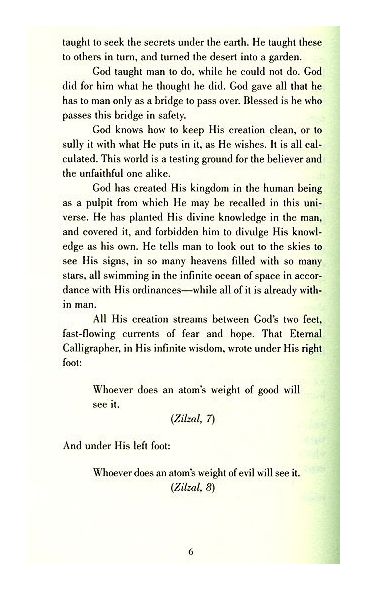 Divine Governance of the Human Kingdom

This little book contains vast knowledge of great benefit to all. It is gathered from the gardens of Eden and divine providence and is meant to be a guide to believers.

Ibn ‘Arabi, the twelfth-century Spanish mystic, is considered by many the greatest master of Sufism. His large body of writings includes The Meccan Revelations (in 560 chapters) and The Bezels of Wisdom (exploring aspects of understanding through the lives of the Prophets of Islam). Contained in this volume is his powerful but little-known work, Divine Governance of the Human Kingdom, rendered into English for the first time. In a particularly startling way, the text uses metaphors from worldly politics to illuminate details of the spiritual search.

Ibn ‘Arabi wrote: "This little book contains vast knowledge of great benefit to all. It is gathered from the gardens of Eden and from divine providence. It is meant to be a guide to believers. There are neither conjectures nor doubts in it. Even if some may find faults in it, they will concede that they are small, fine, and beautiful. I call this book Divine Governance of the Human Kingdom.

"The book is divided into twenty-one chapters. Each section contains instructions for achieving unity, the Lord’s gift to humankind. They show how to keep order within the divine order while improving ourselves; how to guide our lives in the right way; how to protect His kingdom, which is the human being, from oblivion; how to rule it in the way that it is meant to be ruled, by the soul that the Lord has placed in it as His deputy. This book is a fountain that both high and low will be able to quench their thirst by drinking from it. For those who are able to see beneath the evident, there are signs that, if followed, will lead to the Source. For those who see the surface, there are things plain as could be."

Shaykh Tosun Bayrak al-Jerrahi, working from Ottoman Turkish texts of Ibn ‘Arabi’s works, has rendered this and two shorter texts, What the Seeker Needs and The One Alone, into modern English. In an Epilogue, Shaykh Tosun restates Ibn ‘Arabi’s teachings on Sufi practice and the strict duties binding a disciple to his master. Tosun Bayrak is also the author of an interpretation of ‘Abd al-Qadir al-Jilani’s The Secret of Secrets, a translation of Ibn al-Husayn al-Sulami’s Way of Sufi Chivalry and his own book, The Most Beautiful Names.

" Shaykh Tosun’s book offers an easy-to-understand interpretation of three mystical treatises by the celebrated twelfth-to-thirteenth century Sufi master Ibn ‘Arabi. The largest is a fascinating treatise on the divine design and management of the world, and the central role the human model plays in the creative and governing process. The other two are ma la budda -murid (trans. “What the Seeker Needs”), a brief guide for those wanting to follow the Sufi path, and al- (translated as “The One Alone”), an esoteric essay on transcendental unity. The book also offers a modest introduction to the life of Ibn ‘Arabi. Inspired by Ibn ‘Arabi’s teachings, Shaykh Tosun writes with great passion and devotion to the extent of blurring the line between his own words and those of Ibn ‘Arabi. The book is useful to students of Islamic mysticism, especially those who are searching for spiritual insights and mystical teachings."

Review by Samer Akkach, University of .

Muhammad Ibn 'Ali Muhyiddin Ibn 'Arabi, mystic, philosopher, poet, sage, is one of the world's great spiritual teachers. Known as Muhyiddin (the Revivifier of Religion) and the Shaykh al-Akbar (the Greatest Master), he was born in 560 AH (1165 AD)  into the Moorish culture of Andalusian Spain, the centre of an extraordinary flourishing and cross-fertilization of Jewish, Christian and Islamic thought, through which the major scientific and philosophical works of antiquity were transmitted to Northern Europe. Ibn 'Arabi's spiritual attainments were evident from an early age, and he was renowned for his great visionary capacity as well as being a superlative teacher. He extensively in the Islamic world and died in Damascus in 1240 AD.

He wrote over 350 works including the Fusûs al-Hikam, an exposition of the inner meaning of the wisdom of the prophets in the Judaic, Christian, Islamic line, and the Futûhât al-Makkiyya, a vast of spiritual knowledge which unites and distinguishes the three strands of tradition, reason and mystical insight. In his Diwân and Tarjumân he also wrote some of the finest poetry in the Arabic language. These extensive writings provide a beautiful exposition of the Unity of Being, the single and indivisible reality which simultaneously transcends and is manifested in all the images of the world. Ibn 'Arabi shows how Man, in perfection, is the complete image of this reality and how those who truly know their essential self, know God.

Sheikh Tosun Bayrak al-Jerrahi al-Halveti (Istanbul: 1926) is an author, and Sufi. He served as a government official in Ankara, Honorary Consul of Turkey in Morocco and is the Sheikh of the Jerrahi-Halveti Order in America.He studied Biological Sciences at Robert College, Istanbul; Art, Architecture, and Art History in the Studios of Bernard Leger and Andre Lhote in Paris; Architecture at the University of ,, Berkeley; and History of Art at the Courtauld Institute of Art, London. He received a Masters in Fine Arts from Rutgers University.

A retired professor of art and art history from Fairleigh Dickinson University, New Jersey, he has exhibited widely in the United is also a Guggenheim fellow.He retired from the art world in the 1970s and devoted his life to the study and teaching of Islam and Sufism. In 1970 Bayrak met Muzaffer Ozak Ashki al-Jerrahi who became his teacher. Bayrak is now a Sheikh of the Helveti-Jerrahi order residing near the Jerrahi Order of America mosque in Spring Valley, New York. He has been guide of the Jerrahi Order of the Americas, (the primary Western branch of the Halveti-Jerrahi Order of Dervishes) since 1977.Sheikh Tosun Bayrak has translated dozens of books on Islamic spirituality, but he is particularly known for his efforts on the works of the Sufi mystic Ibn Arabi. His translations of classic works of Sufism include Abdul Qadir Al-Jilani Secret of Secrets (Islamic Texts Society, 1992), Inspirations (Threshold Books), The Book of Sufi Chivalry (Inner Traditions, 1991), Suhrawardi: The Shape of Light (Fons Vitae, 1998), The Name and the Named: Divine Attributes of God (Fons Vitae, 2000), and Imam Birgivi The Path of Muhammad (World Wisdom, 2005).