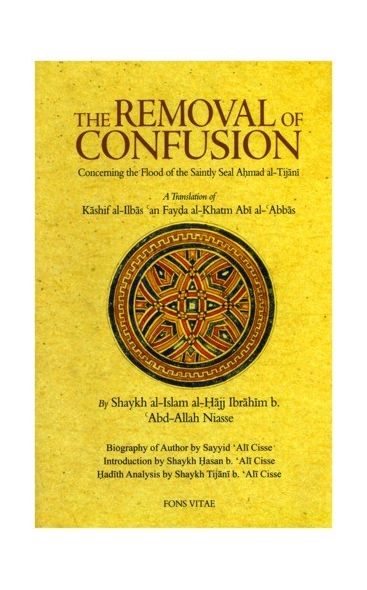 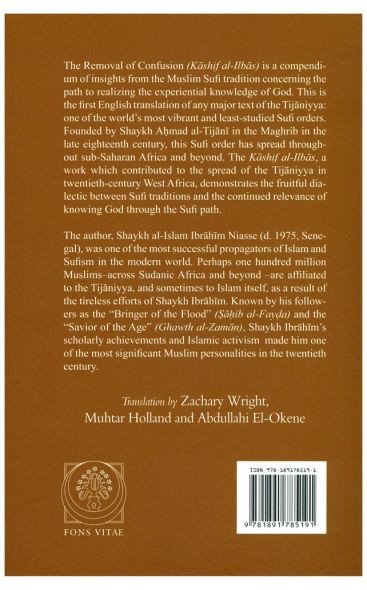 The Removal of Confusion: Concerning the Flood of the Saintly Seal

Shaykh Ibrahim was a Muslim scholar and sage of the Tijaniyya, a Sufi order which has spread to all corners of the Muslim world since Shaykh Ahmad al-Tijani (d. 1815, Fes) established the confraternity in North Africa in the late eighteenth century.

Shaykh Ibrahim had unparalleled success in propagating the Tijaniyya, and those owing their initiation into the order to Shaykh Ibrahim currently number around one hundred million and make up more than half of all the Tijanis in the world.

The distinguishing practice of Shaykh movement was or spiritual training. Through , aspirants transcended the confines of their ego-selves and tasted the directly-experienced knowledge, or gnosis (), of God.

The Kashif al-Ilbas, written early on in the Shaykhs career in 1931-1932, is primarily a guide for the teaching and learning of the experiential knowledge () of God on a widespread scale.

Drawing on the concept of the spiritual flood, gnosis for all who desired it, Shaykh Ibrahim demonstrates in the Kashif that no believing man or woman should deprive him or herself of spiritual illumination.

Shaykh al-Islam Ibrahim Niasse (1900-1975) was West Africa’s most renowned Islamic scholar in the twentieth century. His followers numbered in the millions and comprised the largest single Muslim movement in West Africa (Hiskett, 1984). He was also well-known among the ulama and leaders of the broader Muslim world and a member of such organizations as the Muslim World League (Rabitat al-‘Alam al-Islami based in Saudi Arabia, of which he served as Vice President), the World Muslim Congress (Mutamar al-‘Alam al-Islami; Karachi, Pakistan), the Islamic Research Assembly (Majma’ al-Buhuth al-Islamiyya; Egypt) and the High Council of Islamic Affairs (Majlis al-‘Ala li al-Shu’un al-Islamiyya; Egypt). Following a trip to Cairo, Egypt, in 1961, he became widely known as “Shaykh al-Islam” after having led the Friday prayers in the prestigious Azhar mosque.

Shaykh Ibrahim Abdullah Niasse was born in rural Senegal, the son al-Hajj Abdullah Muhammad Niasse. Al-Hajj Abdullah (d. 1922) represented the culmination of a long line of Islamic scholars in the Senegambia and was himself a well-traveled and consummate shaykh, attracting students from all around the region as far away as Mauritania. Shaykh Ibrahim was educated primarily at the hands of his father, with full access to his father’s extensive library. Shaykh Ibrahim mastered at an early age from his father the full range of Islamic sciences: the Qur’an and its interpretation, the Hadith and their explanation, and Sufism.

Shaykh Ibrahim was the best example of a Sufi according to the description “The Sufi is the son of his hour (ibn ).” He will respond to the needs of the time. At every moment he is dealing with the requirements of that moment. The Muslim who is greatest in understanding is he who submits to the rule of his hour. That is, he gives everything the position it requires in action and speech. He is a person moving with time in a circle. He does not attempt to stop time, not to become stagnant in it, nor to regress in it. His effort is aimed at continually moving forward. In the season of he reads Qur’an and Hadith and presents their explanations. In the season of Hajj, he expounds the virtues of the Muslim pilgrimage. At the time of Mawlid, he recites the Prophet’s Sira or Biography.

Muhtar Holland was born in 1935, in the ancient city of Durham in the North East of England. This statement may be considered anachronistic, however, since he did not bear the name Muhtar until when he was powerful experiences in the of Subud-to embrace the religion of Islam. His freelance activities have mostly been devoted to writing and translating in various parts of the world, including Scotland and California. He made his Pilgrimage [Hajj] to Mecca in 1980.

Zachary A graduate student in African History at Northwestern University (Chicago), Zachary is also the author of On the Path of the Prophet: Shaykh Ahmad Tijani and the Tariqa Muhammadiyya (AAII Publishing, 2005).  He has been maintained close contact with the community of Shaykh Ibrahim Niasse for the last twelve and has studied with Shaykh Hasan and Shaykh Tijani Cisse.

Abdullahi El-Okene is a professor of Engineering at Ahmadu Bello University in Zaria, Nigeria. He received his instruction in the Islamic sciences in Nigeria, and later spent a good deal of time in the companionship of Shaykh Hasan Cisse, being entrusted by him with several Arabic-English translation projects. He is the Chairman of the International Organization of the Tijaniyyah Brotherhood based in and several other Islamic organizations.