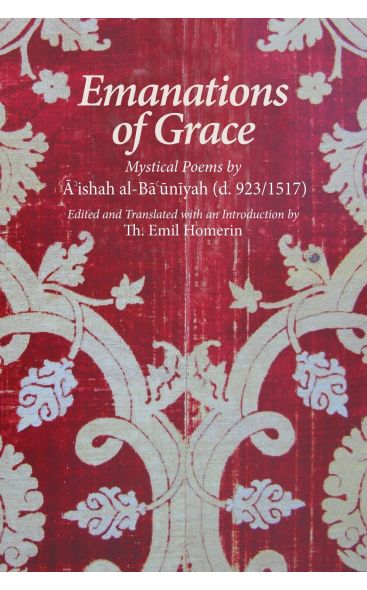 These are the opening verses to a poem by the Muslim mystic ‘A’ishah al-Bācūnīyah, in which she speaks of her love for God and union with Him.

‘A’ishah al-Bācūnīyah (d. 923/1517) was one of the greatest women scholars in Islamic history.  A mystic and prolific poet and writer, ‘A’ishah  composed more works in Arabic than any other woman prior to the 20th  century.  Often, she expressed her great devotion to God and His prophet  and spoke of love and longing on the mystical quest for union.
She also alluded to her extensive education and mystical training, and particular life experiences, which are often reflected in her verse.  writings were read and copied by later generations of admirers her substantial literary and mystical legacies.
Though many of  her works are lost today, several still exist in manuscript including her poetic collection Fayḍ al-Faḍl -Jam’ al-: “The Emanation of Grace  and the Gathering Union.”
The selection of poems from this volume, edited and translated into English here for the first time, recount A’ishah al-Bācūnīyah’s remarkable story of devotion and mystical illumination.

The sun and moon appeared on the horizon of my spirit,
and the heart beheld what eyes could not see,
And sheer beauty revealed itself in guises
to insight’s clear vision.

These are the opening verses a poem by the Muslim mystic ‘A’ishah al-Bācūnīyah, in which she speaks of her love for God and union with Him.   Living a life of devotion, meditation, and prayer, A’ishah experienced moments of ecstasy marked by a sense of timeless unity and illumination:   I behold beauty with eyes lined by His light, and His splendor was the eyes’ sight.  My love’s beauty is my vision, His presence my gardens,   and their fruit is His love talk devoted to me.  Here, 'Ā’ishah likens her mystical state to a life of everlasting the gardens of Paradise where God will reveal Himself to those saved.
There, too, faithful believers will drink the purest wine, and  ‘A’ishah often compares God’s love to an intoxicating wine that causes her  to forget herself in rapture:

This is the tavern of joy where the glasses are full,
aglow like the sun and the moon.
These choice cups are a portion of what comes to me
as their quiet intimacy takes hold.
This is the wine of leisure, and I received from it
perfect fulfillment from an endless source,
A wine taking me to the fountain of bliss,
as I attained peace without anxiety or fear.

‘A’ishah’s mystical experiences enabled her to pass away from a life of selfishness in order to see the divine within her heart and so live an enlightened life of love:

My mind, my spirit, my faith-- all of me
sees clearly without a veil or screen.
So I received the greatest joy and wish,
and grace to me is limitless!

As ‘A’ishah’s spiritual life progressed, she became a Sufi master in her own right, and she composed a guidebook to lead others on the mystic path.  Following a centuries-old Sufi tradition, ‘A’ishah advises the seeker to repent of selfish ways and turn to a sincere life of love for God and all of His creation.
Essential to this transformation is the meditation on human limitations and God’s limitless love. In her poems and other writings, ‘A’ishah often recounts her own states and stages on this quest for union with the hope that others, too, might receive an emanation of grace.

‘A’ishah al-Bāʿūnīyah was one of the greatest women mystics in Islamic history. A Sufi master and an Arab poet, Ā’ishah wrote of her great devotion to God and His prophet and spoke of love and longing on her mystical quest for union. Though many of her works are lost today, several still exist in manuscript including her poetic collection Fayḍ al-Faḍl -Jam’ al-Shaml: The Emanation of Grace and the Gathering Union. The selection of poems from this volume, edited and translated into English here for the first time, recounts her remarkable story of devotion and mystical illumination.
— Th. Emil Homerin, Professor of Religion, Department of  Religion & Classics at the University of Rochester;  Instructor of Islam, classical Arabic literature, and mysticism

This beautiful collection of poetry fills an important gap in Sufi Studies. Although there have been many Sufi women poets, it was difficult before the modern period to hear their own voices because their poems were transmitted by men. ‘A’ishah al-Bā 'ūnīyah was a rare exception.  Her words of lyric beauty and piety will resonate across the centuries.  This work will become a major contribution to the study of women’s spirituality in Islam.”
— Dr. Vincent J. Cornell, Ph.D., Asa Griggs Candler Professor of and Islamic Studies Chair, Department of Middle Eastern and South Asian Studies, Emory University

This remarkable book presents for the first time the poetry of the eminent woman Sufi, ‘A’ishah al-Ba`uniyah, in an eloquent new English translation. achievement is both the discovery of a major mystical author and the convincing rendition of a powerful literary voice.
-Carl W. Ernst, William R. Kenan, Jr., Distinguished Professor, The University of North Carolina at Chapel Hill

Th. (Thomas) Emil Homerin (born 1955 in Pekin, Illinois) is an American scholar of religion. Homerin is one of the most notable scholars of religion in the United States and widely publishes, including books, essays, articles and entries in major such as Encyclopaedia Britannica. Currently, he is Professor of Religion in the Department of Religion & Classics at the University of Rochester, where he teaches courses on Islam, classical Arabic literature, mysticism, and Mt. Hope Cemetery in Rochester.

A specialist in Arabic literature and Islam, Homerin has lived and worked in Egypt for a number of years. Among his many publications are The Wine of Love & Life: Ibn al-Fârid's al-Khamrîyah and al-Qaysarî’s Quest for Meaning (Chicago, 2005), From Arab Poet to Muslim Saint (2nd revised edition, Cairo: American University Press, 2001) and his anthology of translations, Ibn al-Fârid: Sufi Verse & Saintly Life (New York, 2001) published as part of the esteemed Paulist Press series Classics in Western Spirituality. The last of these books features a cover painting by fellow former Pekinite Mark Staff Brandl. Homerin also authored several chapters on Islam in The Religious Foundations of Western Civilization (Abingdon Press, 2006), edited by Jacob Neusner.

Death and the afterlife have been a major focus of work, and he has carried out in Cairo's al-Qarafah cemetery. This initiated his interest in American funerary customs and practice which evolved into his course Speaking Stones on Mt. Hope Cemetery in Rochester, New York.This course examines western funeral ritual and practice, with a particular focus on cemeteries in the United States, and how the iconography and epigraphy of graves and funerary monuments forge symbolic connections among the living and the dead. Homerin and his students have published the results of their research in Epitaph, the newsletter of the Friends of Mt. Hope Cemetery.