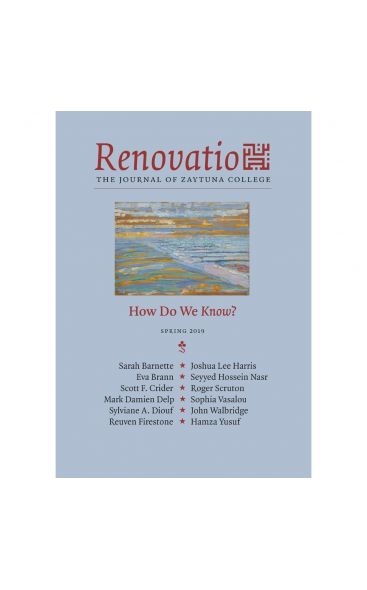 The Spring 2019 issue of Renovatio ("How Do We Know?") seeks to explore how a broader view of knowledge could change the way we understand our world today.

The Prohibition of Slandering The Leader of...

The Spring 2019 issue of Renovatio ("How Do We Know?") seeks to explore how a broader view of knowledge could change the way we understand our world today.

The divorce between Athena and Medina explains much of what went wrong in the Muslim world.

In an ancient world teeming with competing tribal deities, the monotheism of the Jews was distinctive. Was it merely an accident of history that they didn’t spread their faith?

The Many Sides of Knowledge

If the knowledge we gather is partial and limited, can we truly understand the feelings and experiences of others?

The Soul of Rhetoric in the Age of Amazon

Our digital lives are so mediated by soulless algorithms that it seems absurd to imagine genuine human relationships governing our online interactions.

To secure the kind of religious freedoms Muslims desire, we must revisit Muslim commitment to religious pluralism and shared obedience to sovereign powers.

To See the World for the First Time

What Islam Gave the Blues

The blues is neither African nor Islamic—rather, it’s an African American creation shaped by some of the most enduring contributions of West African Muslims to American culture.

Can We Live in Harmony with Nature?

The roots of our environmental crisis are often neglected because, were they to be considered, our worldviews and manners of living would necessarily have to change.

The Islamic Art of Asking Questions

Muslims of the past always tolerated permanent disagreement even about versions of religious truth. Can modern Muslims recapture this tradition?

Belief in the Obvious

As truth seekers, we shield ourselves from sophistry through practiced skepticism. But by wielding the weapon of incredulity, could there be another evil that we unwittingly invite?

How We Split the World Apart

We often understand philosophy as secular and rational and faith as transcendent and irrational. But are the two really separate?

The principle of non-contradiction—that the same thing cannot both be and not be—is routinely denied in modern thought, but this rejection never confronts its real authority.