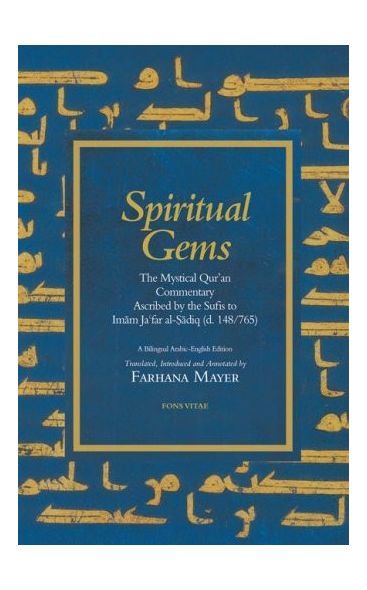 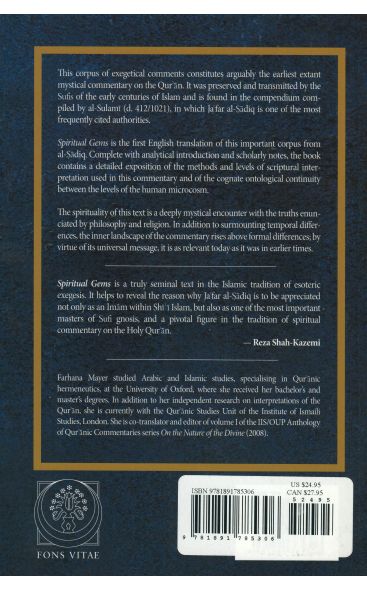 Complete with an analytical introduction and scholarly notes, spiritual gems contains a detailed exposition of the methods and levels of scriptural interpretation used in this commentary and of the cognate ontological continuity between the levels of the human microcosm.

This corpus of exegetical comments constitutes arguably the earliest extant mystical commentary on the Qur'an. It was preserved and transmitted by the Sufis of the early centuries of Islam, and is found in the fourth/tenth through fifth/eleventh-century compendium compiled by al-Sulami (d. 412/1021), in which Jaʿfar al-Sadiq is one of the most frequently cited authorities. Spiritual Gems is the first ever English of this important corpus from al-Sadiq. Complete with an analytical introduction and scholarly notes, the book contains a detailed exposition of the methods and levels of scriptural interpretation used in this commentary and of the cognate ontological continuity between the levels of the human microcosm.

“Every verse of the Qur’an has four levels of meaning: the obvious verbal meaning, the indication or analogy, the subtle meaning, and the deepest reality.”  This saying, attributed to Imam Ja’far as-Sadiq, gives us a glimpse of what we will find in the pages of this translation, compiled by as-Sulami, of the earliest mystical commentaries on the Qur’an”

This volume helps us to understand Islamic scripture on the spiritual and thus, universal level. Indeed, precisely because its insights are on the spiritual level, the commonalities of theme and practice with other spiritual traditions such as Kabbalah become apparent.
This book is important because it presents the words of mystics who were also sound scholars from the Islamic tradition. This translation gives us the raw words directly from traditional sages, accompanied by introductions of tight scholarship which give us an accurate portrayal of the sages' respective contexts.

"The Arabic follows the text of Paul Nwyia's edition, including the lack of markings on the Arabic text of the Qur’an, per the request of the translator. Paul Nwyia came from a generation of scholars who subscribed to the notion that all the text in a manuscript, including passages, should match the manuscript text exactly. The majority of modern scholars in the field, however, no longer hold this view; rather, they believe that tafsir scholars would not have objected to the later addition of diacritical marks to the text as necessary, and in fact, would have expected this to be done. This is because they did not consider the passages as part of their own work; these passages could then be altered according to the received text of the Qur’an. The evidence for this view can be found in a number of texts on manuscript editing."

My first introduction to the commentary attributed to Imam Ja‘far al-Sadiq was from a brief mention of it in Annemarie Schimmel’s 1975 work, Mystical Dimensions of Islam.  This brief “taste” (to use a Sufi term) of Shi’a and Sufi hermeneutics whetted my appetite for more, and in fact, led me to begin my studies of the Arabic language.  What you have in front of you now is a complete English translation of the commentary.  Like mystical commentary itself, Farhana Mayer’s translation, notes, and analysis address many layers of meaning and different kinds of readers.  For scholars of Islamic texts, she has provided invaluable notes on how specific Arabic terms are used and their relationship to other areas of Islamic thought.  For those interested in the Qu’ran, she has given us a very readable but accurate translation of a highly influential and early mystical commentary.  The accompanying analysis of its themes and methodologies skillfully illuminates the coherency of what might otherwise seem atomistic.  For those who read works such as this one for their ongoing power to inspire, the subtlety and richness of Ja‘far al-Sadiq’s comments are fully on display here.  In short, Farhana Mayer has provided an exquisite “setting” for these beautiful gems.  Her efforts are our good fortune.
Kristin Zahra Sands is a Professor of Islamic Studies at Sarah Lawrence College and the author of Sufi Commentaries on the Qur’an in Classical Islam.

“Spiritual Gems is a truly seminal text in the Islamic tradition of esoteric exegesis.  It helps to reveal the reason why Ja‘far al-Sadiq is to be appreciated not only as an Imam within Shi‘a Islam, but also as one of the most important masters of Sufi gnosis, and a pivotal figure in the tradition of spiritual commentary on the Holy Qur’an.”
- Reza Shah Kazemi, Ismaeli Institute of London

Ja`far ibn Muhammad al-Sadiq (702–765 C.E.) was a descendant of Ali from his father's side and a descendant of Abu from his mother's side and was himself a prominent Muslim jurist. He is revered as an imam by the adherents of Shi'a Islam and Alevism and as a renowned Islamic scholar and personality by Sunni Muslims. The Shi'a Muslims consider him to be the Sixth Imam or leader and spiritual successor to Muhammad.Sunni sources claim that doctrines such as the Imamate was formulated many years after al-Sadiq and wrongly ascribed to him.The internal dispute over who was to succeed Ja'far as the imam led to a schism within Shi'a Islam. Al-Sadiq was celebrated among his brothers and peers and stood out among them for his great personal merits.He is highly respected by both Sunni and Shi'a Muslims for his great Islamic scholarship, pious character, and academic contributions.

As well as being considered an Imam of the Shi'a, he is revered by the Naqshbandi Sunni Sufi chain.

He was a polymath: an astronomer, imam, Islamic scholar, Islamic theologian, writer, philosopher, physician, physicist, and scientist.He is also reported to be the teacher of the famous chemist, Jabir ibn Hayyan (Geber).

Farhana Mayer is the Coordinator of the Graduate Programme in Islamic Studies and Humanities (GPISH) and a lecturer in both GPISH and the Secondary Teacher Educator Programme (STEP), in the Department of Graduate Studies. Her subjects include Qur’an, scriptural exegesis (tafsir), Sufism and Shari‘a. She also lectures on Sufism at the School of Oriental and African Studies and is a regular contributor of seminars and workshops in her fields of expertise at various international programmes for the Dept of Community Relations (DCR) and the Ismaili Tariqa Religious Education Board (ITREB).

Prior to working in the Department of Graduate Studies, Farhana Mayer worked in the Studies Unit in the Department of Academic Research Publications (DARP). She has delivered papers at several universities and academic conferences. Her recent publications include an annotated translation of arguably the earliest extant mystical commentary on the Qur’an, entitled: Spiritual Gems: The Mystical Qur'an Commentary Ascribed by the Sufis to Imam Ja'far al-Sadiq Fons Vitae, 2011 and An Anthology of Qur'anic Commentaries: Volume 1: On the Nature of the Divine, (co-authored with F.Hamza and S.Rizvi.) OUP/IIS, 2008.

Before joining the IIS, Farhana Mayer worked at the Islamic Texts Society, Cambridge, and before that for the al-Furqan Foundation as a researcher on the catalogs of West African Arabic manuscripts. She received her BA (1989) and MA (1992) in Arabic and Islamic Studies from the University of Oxford, specializing in Sufi commentaries on the Qur’an and had the privilege of auditing courses in Qur’an and Hadith at the Girls College, University of Al-Azhar, (1989-1990).