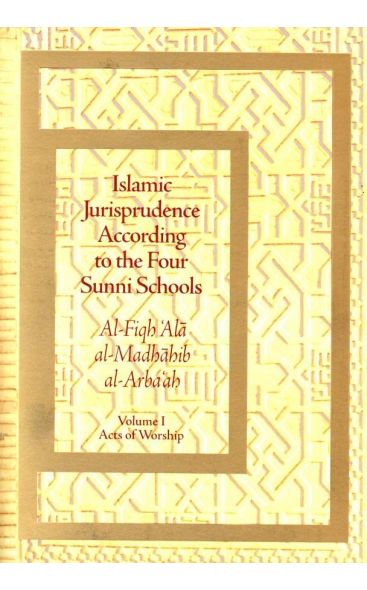 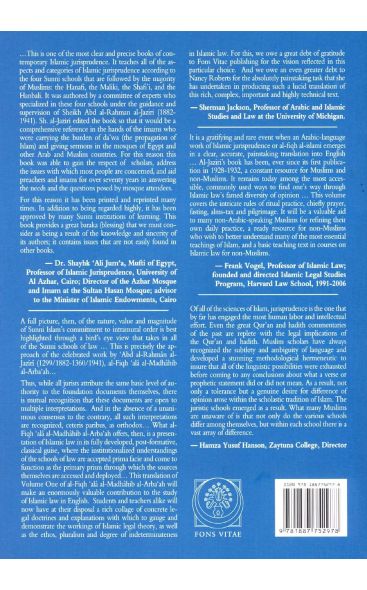 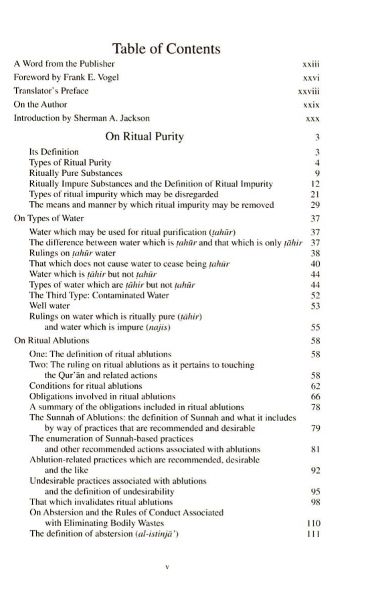 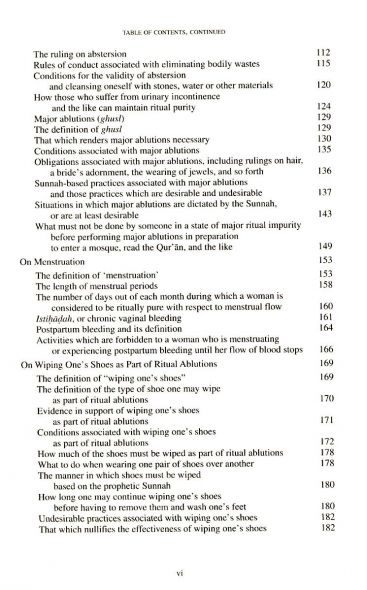 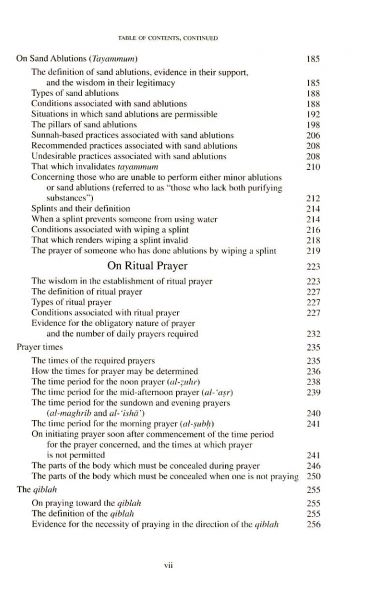 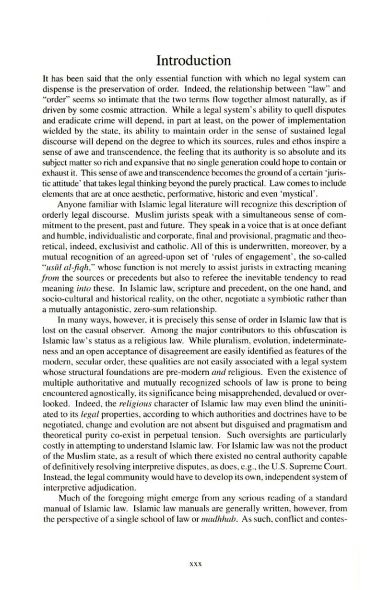 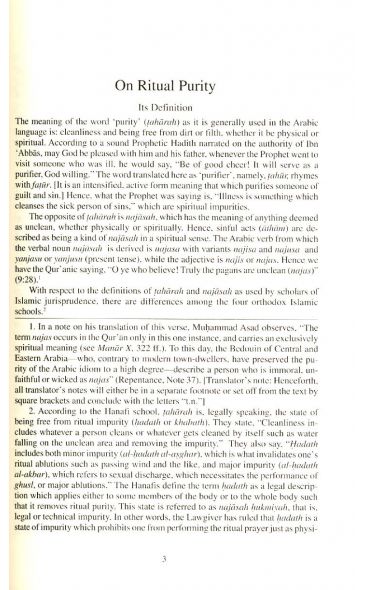 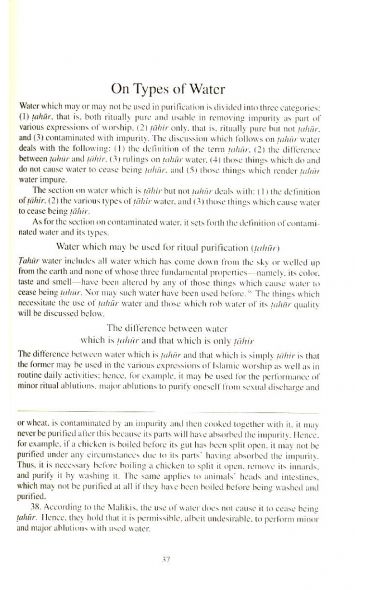 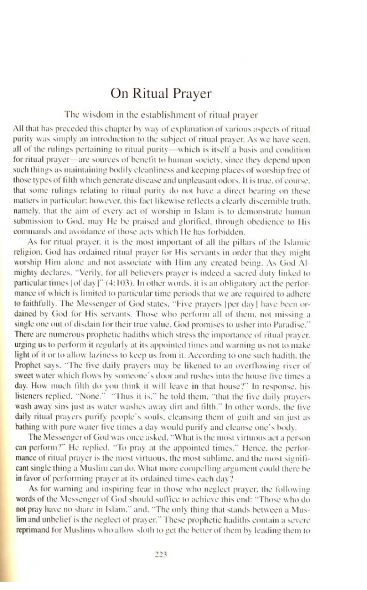 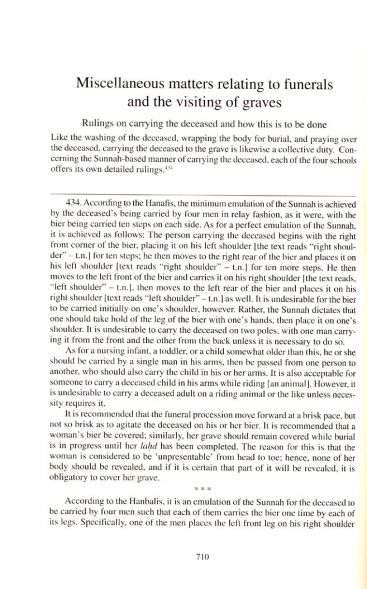 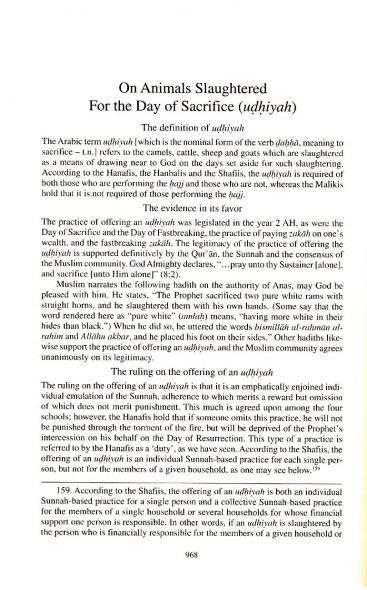 Islamic Jurisprudence According to the Four Sunni Schools

Islamic Jurisprudence According to the Four Sunni Schools is a translation of Volume I of al-Fiqh ‘ala al-Madhahib al-Arba 'ah, by the Azhari scholar Sheikh ‘Abd al-Rahman al-Jaziri (1882-1941). it provides the four legal views of , or acts of worship, according to the interpretations of more recent traditionalists trained at al-Azhar University

Islamic Jurisprudence According to the Four Sunni Schools is a translation of Volume I of al-Fiqh ‘ala al-Madhahib al-Arba 'ah, by the Azhari scholar Sheikh ‘Abd al-Rahman al-Jaziri (1882-1941). Dealing with the forms of worship (), this work offers an in-depth discussion of ritual purity (), ritual prayers (salat), including funeral prayers and the practice of visiting the tomb of the Prophet Muhammad, fasting (), spiritual retreats (i ‘), charity (zakat), the pilgrimage to Mecca (both al-hajj and al ‘umrah), and the offering of animal sacrifices.

Unlike previous works on Islamic law, which offer a medieval perspective, Islamic Jurisprudence According to the Four Sunni Schools is unique in providing the four legal views of or acts of worship, according to the interpretations of more recent traditionalists trained at al-Azhar University.

It is a valuable and detailed reference work for those interested in Islam, Islamic law or comparative law and contains a glossary of Islamic terminology. This is a must for academic libraries as well as for individuals who want to learn more about the performance of religious duties.

To date, this is the only book on the market which brings together the teachings of all four Sunni schools of jurisprudence on a single topic. As such, it provides a unique service by enabling students of Islam, both Muslim and non-Muslim alike, to compare the teachings of the various schools without having to go in search of the relevant source material for each school.  It demonstrates the breadth and mercy of interpretation of each law and provides the Muslim practitioner with various ways in which he or she may fulfill the tenets of the faith.

"This is one of the clearest and most precise books of contemporary Islamic jurisprudence. It teaches all of the aspects and categories of Islamic jurisprudence according to the four Sunni schools that are followed by the majority of Muslims: The Hanafi, the Maliki, the Shafi'i and the Hanbali."

Prev. Professor of Islamic Jurisprudence, University of Al Azhar, Cairo, Director of the Azhar Mosque and Imaam at the Sultan Hasan Mosque, Advisor to the Minister of Islamic Endowments, Cairo

Abd al-Rahman Ibn Muhammad Awad al-Jaziri was born on the Egyptian island of Shandawīl in 1882 (1299 AH) and was educated at al-Azhar from 1896-1909; he later became a teacher at al-Azhar. In 1912, al- Jaziri was appointed for the Ministry of Religious Endowment's Department of Mosques, after which he was promoted to the Ministry's chief inspector. He was subsequently appointed as a professor in al-Azhar's College of the Principles of Religion, and before his death in Ĥulwān in 1941 (1360 AH), al- Jaziri became a member of Committee of Senior Scholars.

- Al-Fiqh cAlā al-Madhāhib al-Arbacah ("Islamic Jurisprudence According to the Four Sunni Schools") in four volumes (Volume I was composed jointly by al- Jaziri and a committee of scholars, while the remaining volumes were composed by al- Jaziri alone)
- Tawđīĥ al-Aqā'id ("Clarification of Doctrines") on the science of monotheism
- Al-Akhlāq al-Dīniyah -Ĥikam al- ("Religious Ethics and the Manifestations of Wisdom in the Islamic Law")
- Adillat al-Yaqīn ("Proofs of Certainty") in response to certain Christian evangelists; and Dīwān Khuţab ("Collected Sermons")

Roberts has also translated works on Islamic history, and Sufism. These include:

Given the specialized nature of the material contained in the present work, I encountered inevitable translation-related difficulties at times, but as Providence would have it, I was given an invaluable consultant in my husband Amin Odeh, who holds a Ph.D. in Arabic Language and Literature and who took an active interest in the work I was undertaking. He purchased me a veritable library of reference materials, including a variety of dictionaries dealing with terms relating to jurisprudence and the like, as well as placing at my disposal his already-existing collection of references. When I came to passages whose meaning was less than apparent, we would sit down with my questions and he would suggest possible ways of interpreting them. When even then the text remained elusive, he would help me obtain further assistance by presenting our questions to a colleague of his at AL al-Bayt University in Mafraq, Jordan with a specialty in Islamic law. In this connection, I would like to extend special thanks to Dr. Fathallah Akthem Tuffahah of the College of Fiqh and Law, AL al-Bayt University for giving so generously of his time toward a proper understanding of the points in question.

In addition, Amin went to the Jordanian University library and made photocopies of other editions of Al-Fiqh al-Madhahib al-Arbacah, and on more than one occasion, it turned out that ambiguities in the text were due to either typographical errors or omission of words or phrases, and which we found to be corrected in one or more of the other editions.

When I encountered terms or phrases that I felt would require additional clarification for Western readers, I also included translator’s notes, either in the form of separate footnotes or, given the fact that 90 percent of the text is already in footnote form, simply between square brackets [ … ] followed by the abbreviation “t.n.” to identify them as my own interpolations.

In addition to the persons already mentioned, I would like to extend my special thanks to Aisha Governeur and Dr. Mary Ann Fadae for affirming their confidence in me by entrusting me with the task of rendering this demanding work into English; to my parents, A.Verne Roberts and Elisabeth Euwer Roberts for the freedom they so generously gave me to pursue what mattered most to me in life; to my siblings, Bob, Jim, Elisabeth and Margaret, for their love, support and encouragement over the years; and to my beautiful, vivacious, bright little girls, Batoul and Salaam, whose arrival in the world gave me the excuse I needed to withdraw sufficiently from other professional commitments to devote myself to the vocation I love most (namely, translation); and last, but not least, to other, unnamed, but precious traveling companions whose steady presence, affection and inspiration has replenished my energy and stamina on occasions too abundant to enumerate.

- All quotations are taken from Muhammad Asad's, The Message of the Qur'an (Gibraltar: Dar al-Andalus, 1984).