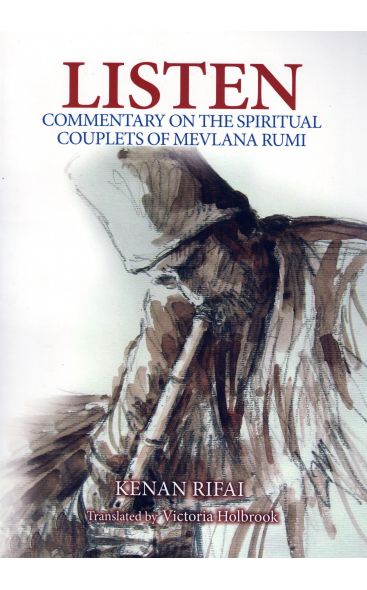 Listen: Commentary on the Spiritual Couplets of Mevlana Rumi

Rumi's six-volume Masnavi is recognized as a classic of the mystical epic, which employs narratives in verse form to convey the terms of spiritual experience.

Rumi's six-volume Masnavi is recognized as a classic of the mystical epic, which employs narratives in verse form to convey the terms of spiritual experience. Due to its complexity and the layers of symbolism, the Masnavi has typically been read through the medium of a commentary.

In this commentary of the Masnavi, Kenan Rifai (1867-1950) clarifies the narrative line, comments on symbolic implications, and connects Rumi's verse to passages from the Qur'an, the hadith of the Prophet Muhammad, and the sayings and poems of Sufi masters in Arabic, Turkish, and Persian. It is this rich multilingual texture that gives Kenan Rifai’s commentary its particular flavor.

His explanation conveys the multiple levels of reference and allusion that were typically brought to bear in study circles where Rumi's verses were recited and discussed. There is a certain informality in the style of Kenan Rifai’s commentary that distinguishes it from the more scholastic approach of its predecessors.

Kenan Rifai was a major figure in late Ottoman Sufism who navigated the transition from the Ottoman caliphate through the Republican period into the era of Turkish secularism. He can be viewed as a traditionally educated but modernizing figure, combining an expertise in Arabic and Persian texts with an interest in modern French literature. He supervised the transformation of his branch of the Rifai Sufi order into a spiritually oriented civil society movement that includes prominent women leaders in Turkey. This work is not a technical demonstration for scholars; rather, it is a close transcription of how a learned Ottoman Sufi would have explained the significance of the Masnavi to an audience of students in oral conversation. Kenan Rifai interprets Rumi’s Masnavi in Rumi’s Muslim religio-cultural context. Rather than treating Rumi as an isolated figure who transcends all cultural and religious identities, this commentary situates him in terms of the main Sufi traditions and presents him as his principal heirs understood him. As the only English commentary on Rumi’s Masnavi available in print, thanks to the meticulous and beautiful translation by Dr. Victoria Holbrook, this highly accessible volume is an exceptional contribution to the understanding of a key figure in Islamic mysticism, Jalal al-Din Rumi, as seen in the Ottoman Sufi legacy culminating in Kenan Rifai.

Kenan Rifai (Thessaloniki 1867 – Istanbul 1950). His father, Abdulhalim, was a member of a dynastic Turkish family from Plovdiv, and his mother, Hatice Cenan (Khatidje Djenan) was the key person who opened the gates of moral and spiritual world to him. She introduced her son to the guidance and supervision of her murshid (spiritual guide), Sheikh Edhem Efendi. Having graduated from Galatasaray High School, he was given a position at the Ministry of Foreign Affairs, while, he studied law at the university.

He worked as a director for Provincial Directorates of National Education in various Ottoman cities and as a principal for a High School in Medina. Returning to Istanbul, he worked as a French language instructor at Boys’ College of Teachers, as a Council Member at Scientific Research Center, the Principal at Dar-ush Shafaka High School (a prestigious school dedicated to orphans) and a member at the Education Council. During the time when he was the Principal at Medina High School, he was in the service of great sheikh (Sheykh-il Meshayikh) Hamza Rifai. After four years of exclusively endowed spiritual training and guidance, he was given the permit to teach and guide, thus became a “murshid”. He began to teach his murids (his aspirants i.e. followers) Islamic Mysticism and Sufism at Altay Lodge in Istanbul that her mother had built. In addition to his native language, Turkish, he was fluent in French, German, Arabic, Persian, Greek, Circassian and English.

Victoria Holbrook is currently a self-employed writer and translator. She received her M.A. and Ph.D. both in Near Eastern Studies from Princeton University. Holbrook was a professor at Ohio State University for nearly twenty years where she designed and taught courses in Turkish language and culture. Additionally, Holbrook has taught at Koç University, Bosphorus University, and Columbia University.

Holbrook has received praise for her translation of The White Castle written by Orhan Pamuk. She has also drawn accolades from her book The Unreadable Shores of Love: Turkish Modernity and Mystic Romance, which won the Turkish Studies Association M. Fuat Köprülü Book Prize.

Most readers of Rumi in the West are unaware that, for centuries, muslims in much of the world have looked upon him as an outstanding guide on the path of achieving oneness with God. Holbrook’s highly readable translation of Rifai’s Listen! goes a long way toward showing how rumi has been understood in his own cultural context down to modern times.
— William C. Chittick, Professor, Department of Asian and Asian-American Studies, Stony Brook university

For all of us Rumi lovers who have adored Rumi’s sublime poetry, here is the answer to our prayers: a rich, profound, and yet accessible commentary on Rumi’s masterpiece, the Masnavi. The lovely translation, by the superb scholar Victoria Holbrook, of Kenan Rifa’i, stands out as the definitive English language commentary on Rumi’s writings. Kenan Rifa’i stands as an heir to the ottoman wisdom of Sufism, yet is fully situated as a modern being whose sensitivities make this commentary a bridge between our world and the world of Rumi, even as Rumi’s own being and writings bridge earth and heaven. Drink it with heart and soul!
— Dr. Omid Safi, Religious Studies: UNC-Chapel Hill

Rumi’s Masnavi is a monument of spiritual wisdom, a roadmap for the soul, a cleansing for the heart, an illumination for the spirit. it is a blessing to have a companion like the respected Kenan Rifai when entering the paradise of the Masnavi. He offers us something rare in these times: a perspective that comes from great knowledge and a living tradition of gnosis.
— Kabir Helminski, Sufi author, Mevlevi Shaikh

What a gift! We are grateful to Victoria Holbrook for conveying into English Ken’an Rifai’s beautiful commentary on Rumi’s Masnavi. For the lovers of Mevlana Rumi this will be a great blessing, enlivening their researches and enlightening their hearts.
— Camille Helminski, translator of Rumi & author of Women of Sufism; co-director of The Threshold Society