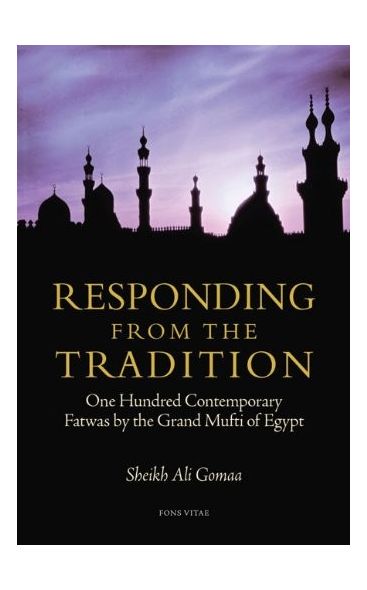 This work provides a substantial representation of how Ali Gomaa interprets Islam in the face of old and new challenges.

The Moon & the Month

"Ali Gomaa has emerged as one of the most influential Muslim scholars in the world today.  This work provides a substantial representation of how he interprets Islam in the face of old and new challenges.  It will be an indispensible resource for any student of modern Islamic piety, theology and law."


"The translators have offered an important service in Responding from the Tradition by introducing the contemporary insights of one of the world’s most eminent Muslim jurists to an English-speaking audience.  A distinguished scholar of Islamic law and spirituality, Sheikh ‘Ali Gomaa draws on his extensive traditional training, experience, and expertise to respond to wide-ranging questions about Islamic beliefs and practices in the modern world."
Mona Hassan, Assistant Professor of Islamic Studies & History, Department of Religion, Duke University

“During his years as Grand Mufti, Sheikh Ali has overseen the issuance of many important fatwas that strive to show Islam’s ongoing relevance to people of the 21st century. The corresponding methodology is characterized by a profound respect for tradition that is balanced by the recognition of its shortcomings, and illuminated by an understanding of the specific needs of the times in which we live.
Both the official and the non-official positions that Sheikh Ali has held have helped to cultivate the unique vantage point from which he perceives and assesses the concerns of the Muslim community. The fatwas gathered in this collection are the result of his exceptional experience. Certain fatwas may seem more immediately relevant than others; however, all have been of contemporary concern to some part of the Muslim community, and all pertain to issues that have fractured the community at one point or another.
Thus, the fatwas gathered here cover a vast range of topics while sharing a traditionally grounded methodology and an expansive and contemporary vision of the world. With this collection the author intends to end debates and animosity among Muslims not by merely asserting one position’s legitimacy over another’s, but by showing that the richness of the Islamic tradition provides a framework within which Muslims may disagree on details while uniting on overarching values.”

- From the Translators’ Introduction

This book is a collection of 100 fatwas (Islamic legal opinions) authored by the Grand Mufti of Egypt Sheikh Ali Gomaa with the express purpose of addressing issues that have been controversial amongst Muslims and have been the cause of discord.

Sheikh Gomaa has selected these questions from the many thousands that have been submitted to him over the years in his capacity as Grand Mufti as well as a respected expert in Islamic law previous to his appointment to that position. As someone who is constantly being exposed to the questions that Muslims today are actually concerned with Sheikh Gomaa is in an excellent position to understand which issues are crucial to the Islamic world today.

His mastery of the Islamic tradition combined with his extensive travel and study in other fields gives Sheikh Gomaa credentials that few others possess today. For the first time the Islamic legal opinions of this scholar who is recognized in both the Islamic world and internationally as one of the most insightful minds working in Islamic law today will prove invaluable to anyone interested in coming to a better understanding of Islam and Muslims in the contemporary world.

This book provides English language readers with a wealth of Islamic religious and legal material. While there are many books in English about Islamic law, and while there are many translations of works of Islamic law, there are very few translations of the fatwa genre of Islamic legal literature. In light of this situation English language readers are only seeing one aspect of Islamic law for it is in the fatwa literature that Islamic law comes face to face with real life as lived by contemporary Muslims. Most Muslims will never actually read a book of Islamic law since those works are of a highly specialized nature they will likely, however, come into contact with the opinions of a Mufti either by going directly to him to ask their questions, by reading them in the newspaper, or by seeing the Mufti issue them on television.
The author of this book regularly issues fatwas in Egyptian newspapers and on Egyptian television that are read and viewed by millions of Muslims. In addition, he heads an institution that issues 4,000 fatwas a day Muslims who either come in person or submit questions by telephone or over the Internet. The author is thus in a unique position to have insight into the issues that are important to and pose difficulty for Muslims. His being the Grand Mufti of Egypt means that the answers that he provides carry a great deal of weight for millions of Muslims.
This book is further set apart by being a compilation of questions that the author considers to be causes for division amongst Muslims. In a time when the media constantly bombards us with tales of “sectarian strife” among Muslims, this book is presented as a solution to the problem. By reaching into the Islamic tradition Sheikh Ali Gomaa is able to provide answers, which, if taken seriously, can put an end to much of the division between Muslims today.

Sheikh Ali Gomaa is the Grand Mufti of the Arab Republic of Egypt --- the second highest Muslim religious position in the country, after the position of Sheikh al-Azhar, one of the most respected religious authorities in the entire Muslim world. As Grand Mufti, he oversees the premier institution in the Muslim world for religious legal direction, Dar al-Ifta. Since his appointment as Grand Mufti in 2003, he has become a leading advocate for moderation, and an outspoken critic of extremist ideologies, which he says are antithetical to Islam.

Born in Bani Suwayf, Egypt in 1952, he received a Bachelor’s degree from the Faculty of Commerce at Ayn Shems University before transferring to the College of Islamic and Arabic Studies of al-Azhar University, the world’s leading Islamic institution of higher learning. He went on to receive a Master’s Degree and a Doctorate in Islamic Jurisprudence from the same institution.

His sermons at Sultan Hasan Mosque, one of the Islamic world’s greatest architectural monuments, have become among the most popular in Egypt since he began delivering them in 1998.

A prolific author and writer on Islamic issues, Dr. Gomaa writes a regular column in the al-Ahram newspaper, an Egyptian daily, and has published many influential papers and 32 acclaimed books on various aspects of Islam. Dr. Gomaa also appears regularly on Egyptian and Arab television.