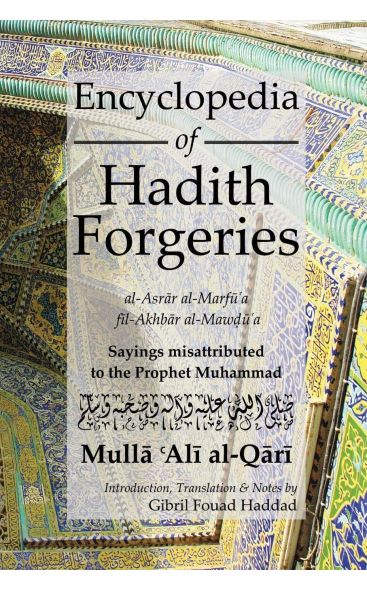 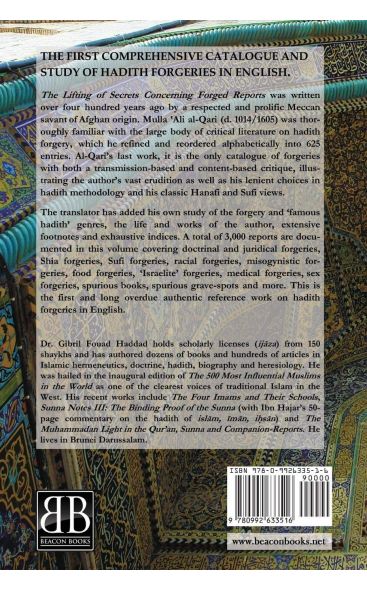 The first comprehensive catalogue and study of hadith forgeries in English – an essential addition to the library of any serious student of hadith studies.

Beacon Books was proud to commence its publishing programme with the launch of The Encyclopedia of Hadith Forgeries by Mullah Ali al Qari translated by Dr Gibril Fouad Haddad. This 740 page hardback book has been over 10 years in the making and is the first comprehensive catalogue and study of hadith forgeries in the English language.

The Lifting of Secrets Concerning Forged Re­ports was written over four hundred years ago by a respected and prolific Meccan savant of Afghan origin. Mulla ‛Ali al-Qari (d. 1014/1605) was thor­oughly famil­iar with the large body of critical lit­erature on hadith forgery, which he re­fined and re­or­dered alpha­beti­cally into 625 entries.

1. An introduction in seven sections

2. An alphabetical dictionary of forgeries (with Qari’s original 625 hadith entries in the book’s margins in Arabic)

3. The combined epitome of the Manar of Ibn al-Qayyim and the Maqasid of Sakhawi in 40 sections.

The translator has added his own study of the forgery and ‘famous hadith’ genres, the life and works of the author, extensive footnotes and exhaustive indices.

The 230-page introduction in seven sections consists of:

1. Forgers and the reasons for hadith forgeries

The book totals 740 pages and 1558 footnotes, and discusses approximately 3,000 hadiths in the twin lights of current and past scholarly expertise of this field.

This is the first and long overdue au­thentic refer­ence work on hadith forgeries in English.

Mulla ‘Ali al-Qari, a student of Ibn Hajr al-Haytami, wrote over a hundred books on various Islamic Sciences including hadith commentaries and text on theology and jurisprudence. He died in Makkah in 1014 A.H./1606 C.E.

Dr. Gibril Fouad Haddad holds scholarly licenses (ijāza) from 150 shaykhs and has authored dozens of books and hundreds of articles in Islamic hermeneutics, doctrine, hadith, biography and here­siology. He was hailed in the inaugural edition of The 500 Most Influential Muslims in the World as one of the clearest voices of traditional Islam in the West.

His recent works include The Four Imams and Their Schools, Sunna Notes III: The Binding Proof of the Sunna (with Ibn Hajar’s 50-page com­mentary on the hadith of islām, īmān, ih.sān) and The Muhammadan Light in theQur’an, Sunna and Companion-Reports. He lives in Brunei Darussalam.