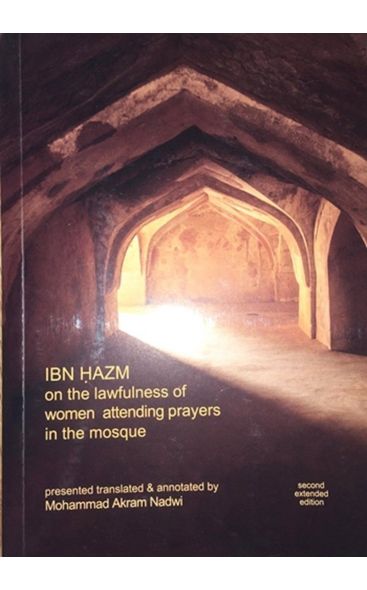 This book is an important step forward in unraveling the confusion of the ages and moving closer to the Sunnah of our beloved Prophet sallallahu 'alayhi wasallam to give women their due rights in worshiping Allah subhanahu wa ta'ala.

Questions about the rights of women, and the evident injustices in Islamic societies of arrangements that claim to rest on the authority of the religion, are not only a ‘modern’ concern. The same questions can be, and were, asked from within the religion, and on its behalf. An example of that is the right of women to attend the congregational prayers in the mosques, and what right (if any) others have to forbid them from doing so.

`Ali‚ ibn Hazm (d. 456/1064), the great Andalusian jurist, poet, and intellectual champion of the Zahiri‚ school, discussed this issue comprehensively in his Muhalla. In the text translated here, he asks and (after weighing the evidence, answers) the following questions:

- Is it lawful for women to attend congregational prayers in the mosques? (Yes.)

- Is it lawful for others to forbid this if, for some private or public reason, they happen to dislike it or disapprove of it? (No.)

- Is the effort of attending the prayers with the congregation in the mosque more worthy for men than women? (No, it is the same.)

- Is it lawful only for elderly women to attend the congregational prayers in the mosques? (No, it is equally lawful for old or young, men or women.)

Mohammad Akram Nadwi’s introduction begins with a brief review of Ibn Hazm’s works and reputation, and ends with a summary of the translated text. The notes identify the Hadith that Ibn Hazm mentions, and indicate which have been considered by the experts as reliable or unreliable. Readers should be able to judge for themselves the authoritativeness of Ibn Hazm’s argument, and whether, if their local circumstances permit, to make others aware of it.

(Dr. Akram Nadwi is a classically-trained Islamic scholar, active in the Muslim community as writer and teacher. He is the author of several books on Hadith, fiqh, Arabic grammmar, and Islamic biography; of these, perhaps the best known is al-Muhaddiithat: the Women Scholars in Islam (Oxford, [2007] 2013.)