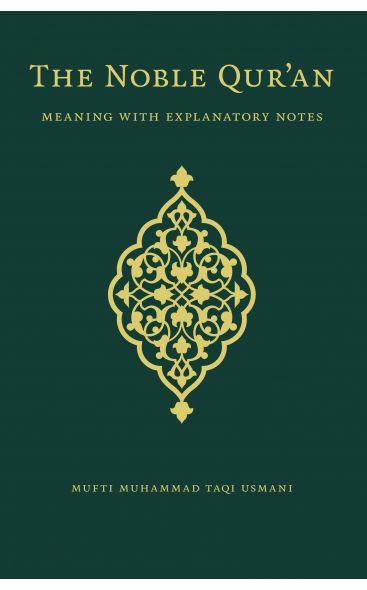 The Noble Qur'an: MEANING WITH EXPLANATORY NOTES - The Standard Edition

Meticulous attention and care have been taken to prepare this new edition of The Noble Qur’an: With meaning and explanatory notes by Mufti Muhammad Taqi Usmani.

Meticulous attention and care have been taken to prepare this new edition of The Noble Qur’an: With meaning and explanatory notes by Mufti Muhammad Taqi Usmani. This unique copy is available in two formats, the standard edition and the deluxe edition.

• This edition is a bound in hardback with gold-blocking and foil embellishments on the cover and spine.

• The inside text is printed on the finest imported Chamois paper imported from the prestigious paper mills of Japan.

• The clear and beautiful typeset text of the Qur’an is based on the Madīnan muṣḥaf while retaining the useful features of the Indian subcontinent copy. The Arabic text is existing at the top of each page, accompanied by Mufti Muhammad Taqi Usmani’s renowned English translation and notes below it.

• The cover design and internal typesetting is the meticulous and patient work of the renowned designer ARM of WTP.

• The opening spread of the Fātiḥah and Baqarah have been carefully produced by a Bahraini artist for this edition.

• The Qur’anic text is concluded with a beautiful and meaningful supplication to be read upon completion, and taken from the Tipu Sultan (1441–1442/845ah) muṣḥaf. An English transliteration and translation of the supplication is included.

• A detailed twenty-two-page index is appended at the end.

Mufti Muhammad Taqi Usmani is one of the leading Islamic scholars living today. He is an expert in the fields of Islamic Jurisprudence,Economics, Hadith and Tasawwuf. Born in Deoband in 1362H(1943 CE), he graduated par excellence from Dars e Nizami at Darul Uloom, Karachi, Pakistan. For the past 35 years, he has been teaching at the Darul-Uloom in Karachi.

He is currently the deputy chairman of the Jeddah based Islamic Fiqh Council of the Organization of Islamic Conference (OIC). He has also authored more than 40 books on various Islamic topics.