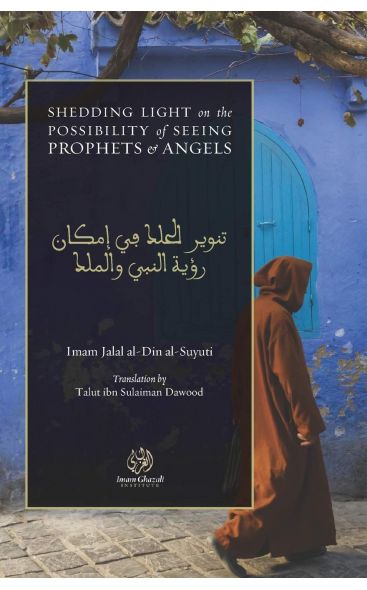 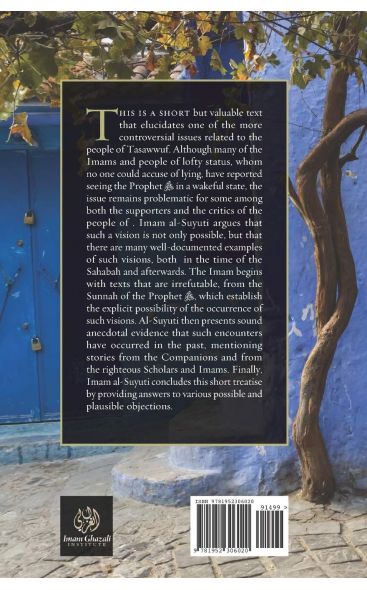 This is a short but valuable text that elucidates one of the more controversial issues related to the people of Tasawwuf, and more specifically to the people of unveiling. Although many of the Imams and people of lofty status, whom no one could accuse of lying, have reported seeing the Prophet, peace be upon him, in a wakeful state, the issue remains problematic for some Scholars, among both the supporters and the critics of the Sufis.

Imam al-Suyuti argues that such a vision is not only possible, but that there are many well-documented examples of such visions, both in the time of the Sahabah (radhi Allahu 'anhum ajma'in) and afterwards. The Imam begins with texts that are irrefutable, from the Sunnah of the Prophet, peace be upon him, which establish the explicit possibility of the occurrence of such visions.

Al-Suyuti then presents sound anecdotal evidence that such encounters have occurred in the past, mentioning stories from the Companions (radhi Allahu 'anhum ajma'in) and from the righteous Scholars and Imams (may Allah have mercy on them). Finally, Imam al-Suyuti concludes this short treatise by providing answers to various possible and plausible objections.

Overall, this book is recommended as an introduction to the subject, which is covered in detail in the works of many of the Awliya' (may Allah have mercy on them).

Imam Jalal al-Din al-Misri al-Suyuti al-Shafi`i al-Ash`ari, also known as Ibn al-Asyuti  (849-911AH /1445-1505), the mujtahid imam and renewer of the tenth Islamic century, foremost Hadith master, encyclopaedist, historian, and biographer and probably one of the most prolific of all Islamic writers. There are an enormous number of his essays and treatises preserved today. A number of his writings concerned scientific topics or issues related to natural science and food and regimen, amongst other things From Asyut in Egypt, he was among the most renowned and prolific Muslim scholars of all time.

He wrote more than 300 books, covering every aspect of the Islamic sciences. He memorized the Qur’an at the age of ‘eight, and then went on to study with more than 150 scholars. He traveled extensively in his quest for knowledge — to Damascus, Hijaz, Yemen, India, Morocco, and the lands south of Morocco, as well as in Egypt.