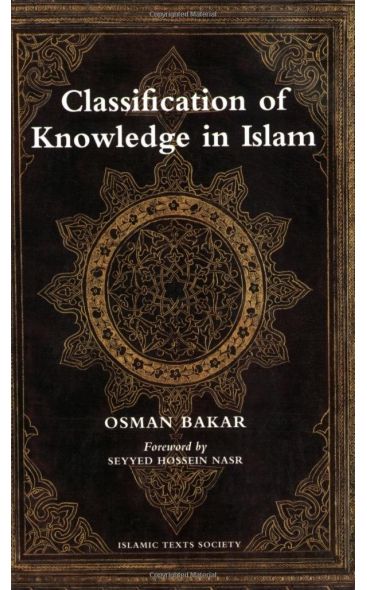 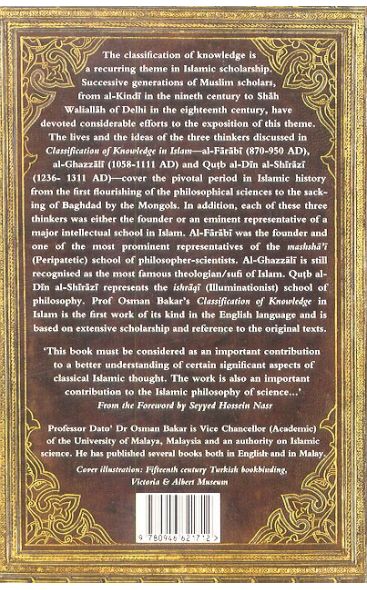 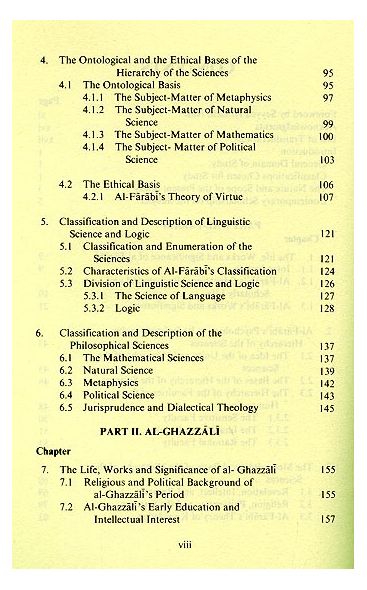 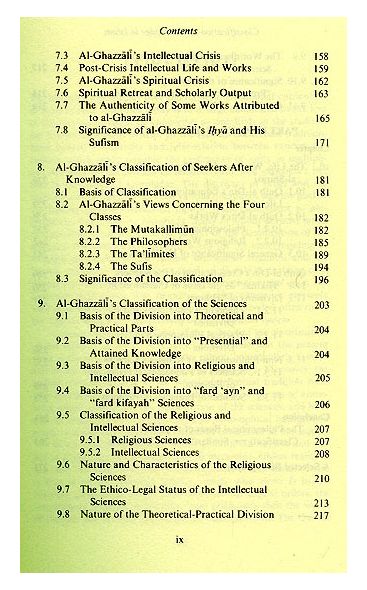 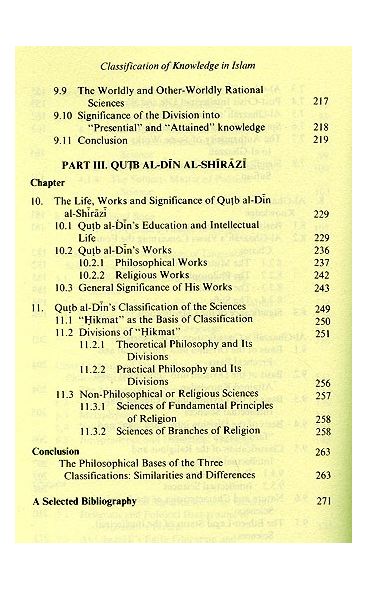 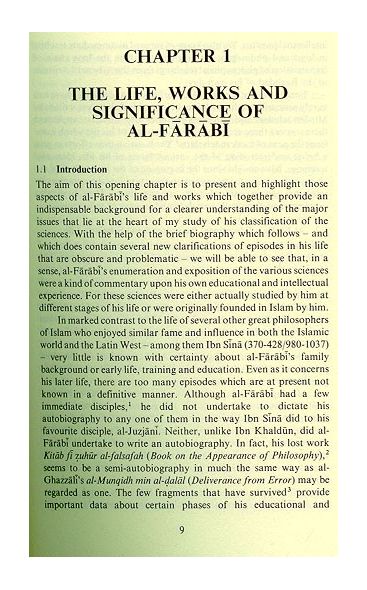 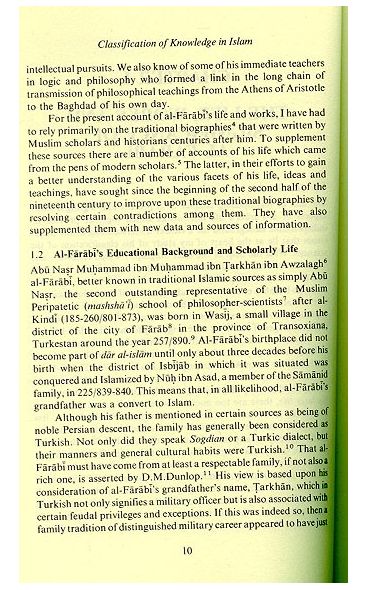 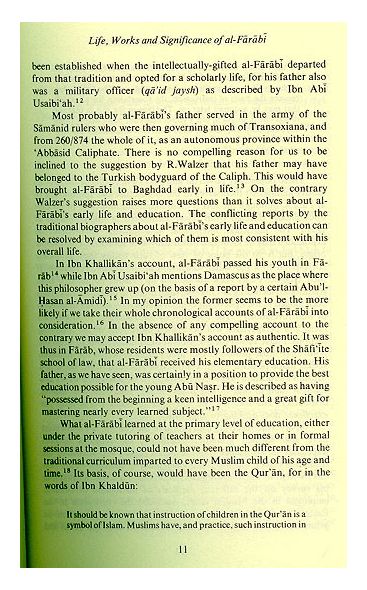 Classification of Knowledge in Islam

The classification of knowledge is a recurring theme in Islamic scholarship.

The classification of knowledge is a recurring theme in Islamic scholarship. Successive generations of Muslim scholars, from al-Kindi in the ninth century to Shah Waliallah of Delhi in the eighteenth century, have devoted considerable efforts to the exposition of this theme. The lives and the ideas of the three thinkers discussed in Classification of Knowledge in Islam - al-Farabi (870-950AD), al-Ghazzali (1058-1111AD) and Qutb al-Din al-Shirazi (1236-1311AD) - cover the pivotal period of Islamic history from the first flourishing of the philosophical sciences to the sacking of Baghdad by the Mongols.

In addition, each of these three thinkers was either a founder or an eminent representative of a major intellectual school in Islam. Al-Farabi was the founder and one of the most prominent representatives of the mashsha’i (Peripatetic) school of philosopher-scientists. Al-Ghazzali is still recognised as the most famous theologian/sufi of Islam. Qutb al-Din al-Shirazi represents the ishraqi(Illuminationists) school of philosophy. Prof. Osman Bakar’s Classification of Knowledge in Islami s the first work of its kind in the English language and is based on extensive scholarships and reference to the original texts.

- From the Foreword by Seyyed Hossein Nasr

Excerpt from the Book

2.1 The idea of the Unity and Hierarchy of the Sciences
No proper, in-depth philosophical study of al-Farabi’s classification of the sciences, indeed of any worthy classification, is possible without a prior investigation into certain aspects of epistemology. This investigation must provide the philosophical basis of classification. It is only in the light of such an epistemological paradigm that we can unveil the true significance of why, for example, al-Farabi chose the scheme of classifying the sciences that he did, why a number of sciences in his day, such as alchemy and the interpretation of dreams, were excluded from his enumeration (although he wrote treatises on them), and why the religious sciences of jurisprudence (ilm al-fiqh) and kalam (dialectical theology) do not seem to occupy a central position in his classification. N. Rescher, in fact, treated the Ihya al-ulum, the treatise in which the above classification is given, as one of al-Farabi’s important works on epistemology.

The most fundamental idea related to traditional epistemology to which al-Farabi fully subscribed is that of the unity and the hierarchy of the sciences. The profound relationship between this idea and traditional epistemology may be expressed by saying that in one sense the idea is the fruit of traditional inquiry into epistemology, while in another sense it is a basis of that inquiry. The former is true, use this idea results from the application of the doctrine of Tawhid (Unity of the divine principle) to the whole domain of human intelligence and its activities of thinking and knowing. In inquiring into the problem of how a person knows—that is, the methodology of knowledge (al-ilm) in its most comprehensive sense one cannot but be confronted by the hierarchic nature and reality of the subjective and objective poles of knowledge. We are, in other words, confronted with the hierarchy of the faculties and powers of knowing within the human knowing subject and the world of beings that are knowable and known.

This hierarchy in both the microcosmic and macrocosmic orders of reality represents many manifestations of the divine principle. The idea of the hierarchy of the sciences, al-Farabi would say, is rooted in the nature of things. The sciences constitute a unity because, as will be explained in chapter three, their ultimate source is one, namely the divine intellect. This is true regardless of the intermediary agencies through which people may have acquired these sciences.

The idea of the unity and hierarchy of the sciences may also be regarded as a basis for traditional epistemology. This is true in a human society closely bound to revelation, like the society in which al-Farabi lived and thought. There, the idea of a hierarchy of reality is very much alive. Thanks to the teaching of revelation, that idea is accepted as an axiomatic philosophical truth. It is evident that the idea of hierarchy is rooted in Islamic revelation from the following teachings of the Qur’an andhadiths. First, the Qur’anic verses themselves are of various grades in respect of value although all of them are believed to be of divine origin This is because they deal with different levels of reality.

The celebrated Verse of the Throne (ayat al-kursi) was described by the Prophet as the chief (sayyidah) of the Qur’anic verses. As explained by al-Ghazzali, the reason for this is that the verse is exclusively “concerned with the divine essence, attributes and works” and that “it contains nothing other than these.” Moreover, according to another prophetic hadith, the greatest divine name (al-ism al-a’zam) lies in the Verse of he Throne. The Prophet also said that the Chapter of Sincerity or Purity (Surat al-ikhlas), which is made up of four short verses, equals one third of the Qur’an. The high position occupied by this chapter is due to the fact that it concerns knowledge of the Haqiqah or the divine reality, which is the most excellent of the three fundamental forms or levels of knowledge contained in the Qur’an. The other two divisions of the Qur’anic verses deal respectively with the Tariqah and the Shari’ah, both which reflect the Haqiqah at their own levels. The Taflqah, the esoteric spiritual path to God, is the qualitative and vertical extension of the Shari’ah, the divine law which is the general path to God.

The scriptural evidence cited above indicates that the hierarchic structure of the Qur’an reflects the structure of objective reality. There are, however, numerous verses which refer directly to the hierarchy of creation. These speak of the tripartite division of the verse into the heavens, the earth, and the intermediate world. There is also the lower heaven and the higher angelic world which is nearer to God. Angels, according to both the Qur’an and hadiths, have been created by God with different ranks. Revelation also teaches that both Paradise and Hell are characterized by degrees.

One finds numerous references in the Qur’an and hadiths to the idea of degrees of intellectual and spiritual realization or the subjective experience of reality. We have, for example, a hierarchy of believers and knowers, as testified by the following verse: “God raises in degrees those of you who believe and those to whom knowledge is given. According to Ibn ‘Abbas (d.68/687-688), a companion of Prophet, the learned rank seven hundred grades above ordinary believers. There is, further, the hierarchy of witnesses of divine unity. Says the Qur’an: “God bears witness that there is no god but Him, and so do His angels and those endowed with knowledge standing firm on justice.” We may also mention here the three main categories or divisions of mankind after the Day of Judgment. In Qur’anic terminology, these are (1) those nearest to God (al­muqarrabun),(2) the Companions of the Right Hand (ashab al­maimanah), that is the righteous generally, and (3) the Companions of the Left Hand (ashab al-mashamah), those who will be placed in the abode of misery because they have rejected God and His Message or have led a wicked and sinful life.

The above references to the Qur’an and the prophetic traditions, although by no means exhaustive, are sufficient in our view for the purpose we have in mind, namely to demonstrate that the idea of hierarchy is rooted in the Islamic revelation. Since the hierarchic structure of reality extends to all domains of cosmic manifestation, including the realm of human intelligence and cognition, its corollaries in these domains (one of which is the hierarchy of the sciences) are operative in most people’s minds when they deal with the ace of things in the cosmic order. Thus, in the second sense referred to earlier and in the way of looking at the genesis of philosophical and scientific concepts, al-Farabi’s inquiry into psychology represents no more than an attempt to give a rational dress to the metaphysical idea of the hierarchy of beings and of knowledge. Al-Farabi certainly did not discover the above metaphysical idea through the process of rational inquiry. Rather, this idea acts as one of the principal guides to that inquiry, while at the same time being confirmed by it.

Although the idea of hierarchy was generally accepted medieval Muslim thinkers, it was by no means conceptualized and understood in only one way. We may speak of the distinctly Farabian exposition of this idea. Accordingly, in the next three chapters, I deal with what I consider to be al-Farabi’s treatment a understanding of the specific idea of the unity and the hierarchy of sciences.
​

Dr. Osman Bakar is a scholar, teacher and author whose writings are known throughout many Islamic countries and by Western scholars of Islam.

Dr. Bakar was born in Temerloh in the state of Pahang, Malaysia. He completed his undergraduate degree with Honors and an M.Sc. in Mathematics (specializing in Algebra) at London University. In 1981, Osman Bakar entered Temple University where he completed an M.A. in Comparative Religion and his Ph.D. in Philosophy of Science/Islamic Philosophy.

Osman Bakar served as the Deputy Vice Chancellor/Vice President of Academics and was the first holder of the Chair of the Philosophy of Science at the University of Malaya (Kuala Lumpur), a post he held until 2001. He is one of the founding members and has also served as President of the Islamic Academy of Science of Malaysia. His research interests include Southeast Asian Islam, particularly Malaysian-Indonesian Islam, contemporary Islamic thought, and religion and science in the Islamic context, both classical and modern.

Many of his essays have appeared in numerous journals, chapters in various books, and in encyclopedias. His books, Classification of Knowledge in Islam, Tawhid and Science, and Civilizational Dialogue, among others, have been translated into Albanian, Arabic, Chinese, English, French, Indonesian, Persian, Spanish, Turkish, and Urdu. In 1994 he was awarded the honorary title of "Dato" by the Sultan of Pahang and by the King of Malaysia in 2000. Dr. Bakar has received additional recognition for his work, including the Fulbright Visiting Scholar at Harvard University. He has also served as a consultant to various agencies such as the United Nations and UNESCO.

Osman Bakar's essay "The Nature and Extent of Criticism of Evolutionary Theory" is included in the anthology Science and the Myth of Progress .

(Foreword By) Seyyed Hossein Nasr (born April 7, 1933) is an Iranian University Professor of Islamic studies at George Washington University, and a prominent Islamic philosopher. He is the author of many scholarly books and articles.Nasr is a Muslim Persian philosopher and renowned scholar of comparative religion, a lifelong student and follower of Frithjof Schuon, and writes in the fields of Islamic esoterism, Sufism, philosophy of science, and metaphysics.

Nasr was the first Muslim to deliver the distinguished Gifford Lectures, and in year 2000, a volume was devoted to him in the prestigious Library of Living Philosophers.

Professor Nasr speaks and writes based on the doctrine and the viewpoints of the perennial philosophy on subjects such as philosophy, religion, spirituality, music, art, architecture, science, literature, civilizational dialogues, and the natural environment. He also wrote two books of poetry (namely Poems of the Way and The Pilgrimage of Life and the Wisdom of Rumi), and has been even described as a 'polymath'.