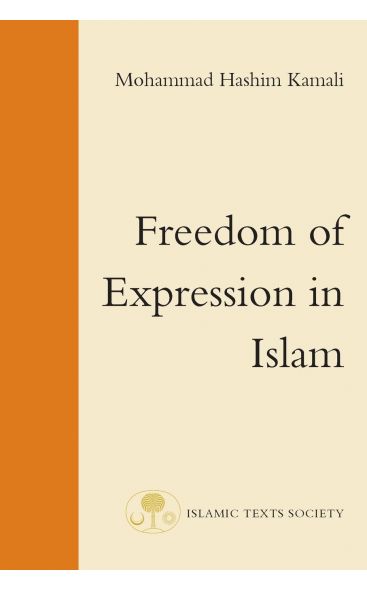 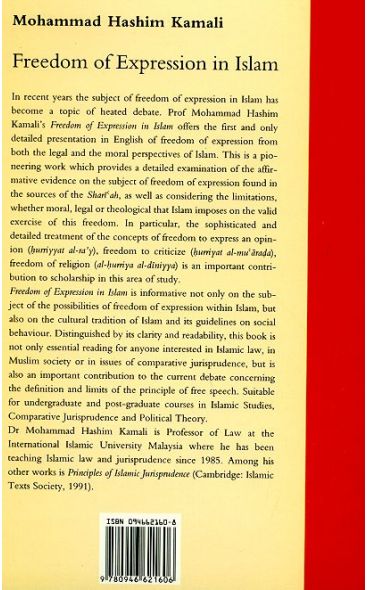 Freedom of Expression in Islam

This book offers the first and only detailed presentation in English of freedom of expression from both the legal and moral perspectives of Islam.

Freedom of Expression in Islam is informative not only on the subject of the possibilities of freedom of expression within Islam, but also on the cultural tradition of Islam and its guidelines on social behavior. Freedom of Expression in Islam is part of a series dedicated to the fundamental rights and liberties in Islam and should be read in conjunction with The Dignity of Man: An Islamic Perspective and Freedom, Equality and Justice in Islam.

Since freedom can apply to competing or even conflicting interests, it tends to defy the idea of a comprehensive definition, which is precisely why there is no clear definition for freedom. There are, of course, many attempts by writers and commentators to define freedom, yet they are all open to some level of uncertainty and doubt. Freedom for whom? Freedom from what? And freedom to do what? To the mystic, freedom has often meant the release from egoity and dependence on the material world. The philosopher and theologian would extend the debate to encompass the relationship between God and man, and the extent to which a person can be deemed free. What meaning, if any, can the word ‘freedom’ have in that context?

For the lawyer and the judge, freedom operates within the limits of the law. I shall presently give a definition of freedom from a legal perspective, but bear in mind that it is only an attempt to define a certain aspect of this concept without any claim to comprehensiveness. It should be noted at the outset that the basic notion of freedom, in an objective sense, is common to all legal systems, traditions and cultures. Whether one talks of freedom in western law, Chinese law, or Islamic law, this must essentially mean ‘the ability of the individual to say or do what he or she wishes, or to avoid doing so, without violating the right of others, or the limits that are set by the law’. Although I have quoted this definition from an Islamic source, its basic message is nevertheless universal. Liberty has elsewhere been defined as ‘the extent to which the individual can determine his own destiny and act as he wishes, unconstrained by others.’ Freedom of expression means ‘the absence of restraints upon the ability of individuals or groups to communicate their ideas to others, subject to the understanding that they do not in turn coerce others into paying attention or that they do not invade other rights essential to the dignity of the individual’.

Freedom of expression includes freedom of the press and the liberty to communicate ideas in all forms including books, pictures, signs and other means of communication. The purpose may be to inform, to persuade, to convince others, to reveal the truth or to clarify and eliminate doubt. The last two definitions that I have quoted above are from western sources, and yet, the concepts that they convey are universal. We may also note in this connection, Montgomery-Watt’s brief comparison of the Muslim concept of freedom with that of its western counterpart, in which he has high-lighted some of the differences between them but concluded that ‘despite such points, however, it seems likely that there is a combination of ideas somewhere in Islamic thought, which performs much the same function as the concept of freedom does in the west.’ Thus, the basic notion of freedom and of freedom of expression would appear to strike a common note in all legal traditions, including that of Islam. However, the scope and character of freedom of expression under the Shari’ah differs widely from other laws in respect of detail, especially with reference to the limits that are imposed by the Shari’ah and the values that are to be upheld. If I were to characterize the rules of the Shari’ah on freedom of expression, I would be inclined to say that, unlike modern legal discourses on the subject, the Shari’ah does not convey a great deal of awareness about state authority and the political interests of its agencies and institutions. To that extent, the Shari’ah is egalitarian and substantive in the sense that attention is paid to actual values rather than to institutional interests or the dictates of the status quo and power politics. But, being a religious law, the Shari’ah is only expected to be emphatic about moral and religious values, which might mean imposing restrictions on freedom of expression in areas where this might come into conflict with the principles of Islam. This can, perhaps, be clearly seen in reference to the Shari’ah rules pertaining to blasphemy, heresy and disbelief, where the dominant concern is to defend the dogma and belief-structure of Islam, even at the expense of imposing restrictions on what may, under western law, be seen as personal matters which fall outside the concern of the law. The rules of the Shari’ah pertaining to the rights of citizens to criticise the government are, on the other hand, indicative of latitude. By comparison to some of the over-regulated areas of modem law in relation to such matters as sedition and criticism of government authorities, Shari’ah rules encourage flexibility and tolerance. Moral advice and encouragement also pervade the bulk of Shari’ah rules on freedom of expression; the legal rules therein are often less elaborate compared to the teachings and recommendations that aim at developing the individual’s personality and character.
​

Mohammad Hashim Kamali (born February 7, 1944, Nangarhar Province, Afghanistan) is an Afghan Islamic scholar and former professor of law at the International Islamic University of Malaysia. He taught Islamic law and jurisprudence between 1985 and 2004.

Mohammad Hashim Kamali served as Professor of Islamic law and jurisprudence at the International Islamic University Malaysia, and also as Dean of the International Institute of Islamic Thought & Civilisation (ISTAC) from 1985-2007. He is currently the CEO of the International Institute of Advanced Islamic Studies (IAIS) Malaysia under the newly appointed Chairman of the Institute, Former Prime Minister of Malaysia, Tun Abdullah Haji Ahmad Badawi. He studied law at Kabul University and then served as Assistant Professor, and subsequently as Public Prosecutor with the Ministry of Justice, Afghanistan, 1965-1968. He completed his LL.M. in comparative law, and a PhD in Islamic and Middle Eastern law at the University of London, 1969–1976.