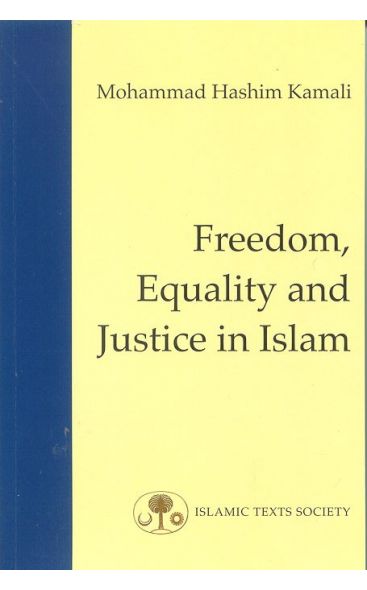 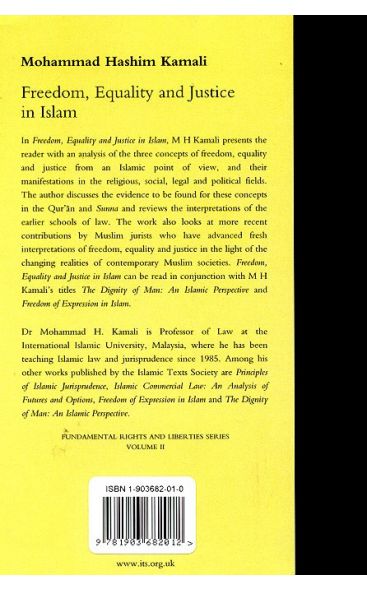 Freedom, Equality and Justice in Islam

The author discusses the evidence to be found for these concepts in the Qur’an and Sunna, and reviews the interpretations of the earlier schools of law.

In Freedom, Equality and Justice in Islam, M H Kamali presents the reader with an analysis of the three concepts of freedom, equality and justice from an Islamic point of view and their manifestations in the religious, social, legal and political fields. The author discusses the evidence to be found for these concepts in the Qur’an and Sunna, and reviews the interpretations of the earlier schools of law.

The work also looks at more recent contributions by Muslim jurists who have advanced fresh interpretations of freedom, equality and justice in the light of the changing realities of contemporary Muslim societies. Freedom, Equality and Justice in Islam is part of a series dedicated to the fundamental rights and liberties in Islam and should be read in conjunction with The Dignity of Man: An Islamic Perspective and Freedom of Expression in Islam.

The subjects that are addressed in this volume are the concern of every legal system, and are not, therefore, peculiar to the Shari’ah. Their relationship to one another and to the general theme of human rights hardly needs elucidation. Justice and equality are closely interrelated in that the one cannot be meaningfully implemented without the other. For justice often means equal treatment and the equal distribution of advantages and burdens, or a commensurate correction of an imbalance that is caused by deviant behavior. Similarly, neither equality nor justice can be a meaningful reality without freedom. For justice presumes the moral autonomy of individuals and their liberty to act as they will. Justice can therefore have little meaning if it is applied to a person or a group of persons who are deprived of their freedom, or compelled to a course of conduct that is beyond their control. Equality also acquires much of its substance only in an environment where freedom is a reality. To treat two prisoners equally does make some sense but equality before the law in different situations and among people of different calibre and status is where equality becomes more meaningful.

The first chapter on freedom in this volume is mostly concerned with a conceptual analysis of freedom, its manifestations in theological, social and political contexts, and the various shades of meaning it has been given by commentators from different disciplines. Freedom has a basic meaning, and this is why any serious distortion or deviation from its core concept has not commanded general acceptance. Yet beyond this basic clarity, the meanings and implications of freedom vary considerably and tend to become increasingly complex. This is borne out by the fact that a comprehensive and all-embracing definition of freedom has yet to be arrived at. The conceptual analysis of freedom has not received as much attention from Muslim jurists as it has in the writings of Western scholars on the subject. Part of the reason for this might be that the basic perimeters of freedom in Islam are determined by reference to the normative evidences of the Qur’an and Sunnah, but there is considerable variation in the understanding of these evidences and the manner in which commentators have related them to theological, legal and political subject matter. This presentation provides a review of the basic evidence on freedom and the contributions of Muslim scholars to the development of ideas on the subject.

The chapter on equality that is presented here is also concerned mainly with an analysis of the normative evidence of the Qur’an and Sunnah, which Muslim jurists have elaborated in reference to particular themes. Equality, like freedom, is an integrated concept, which is indivisible and averse to dismemberment and compromise. Yet neither freedom nor equality are absolute in the sense that both are amenable to the influences of context and circumstance. In addition to a general characterisation of equality and its evidential basis in the Shari’ah, this presentation also looks into the application of equality to two other subjects, namely women and non-Muslims, in the way they are treated in Islamic legal literature. It is of interest to note a certain contrast, highlighted in this presentation, between earlier juristic writings on these themes, and the works of contemporary ‘ulama’ and scholars. Muslim jurists of the twentieth century have made a significant contribution to the understanding of the source evidence of the Shari’ah on equality in conjunction, particularly, with the changing realities of contemporary Muslim societies. They have not hesitated, for instance, in taking a totally different stand on women’s issues from many classical scholars, and advancing a different perspective on equality in Shari’ah for all citizens, regardless of their race, language or religion. It is clearly in these areas that the substance of the modern reformist thought in Shari’ah makes its presence unmistakably visible.

Justice is the sum-total, in a sense, of all recognised rights and duties, as it often consists of nothing more than a balanced implementation of rights and duties, and of due regard for equality and freedom. The Qur’an is emphatic on the objectivity of justice, so much so that it defies any level of relativity and compromise in its basic conception. A perusal of the Qur’anic evidence on justice leaves one in no doubt that justice is integral to the basic outlook and philosophy of Islam, within or beyond the Shari’ah itself. It is therefore not incorrect to say that the Shari’ah is committed to justice as one of its cardinal goals and objectives, to the extent that the veracity of the Shari’ah itself can be measured by its effectiveness in administering justice. This is the understanding, in fact, that the renowned Hanbali jurist, Ibn Qayyim al-Jawziyya, has conveyed in his widely-quoted statement that ‘Islam will always stand for justice and any path that is taken towards justice is bound to be in harmony with the Shari’ah and can never be against it’.

The Shari’ah shows the way to justice and this way must be followed as far as possible. In the event, however, that the established rules of the Shari’ah do not offer sufficient guidelines by which to administer justice, one may take any route, including for example, those of natural rights and natural justice, or the general rules of equity and fairness, or that of a judicious policy (siyasah shar’iyyah), in order to secure justice, and the result that is arrived at is a fortiori in accordance with the Shari’ah and cannot be held to be contrary to it.

The chapter that is presented here on justice consists essentially of a review and analysis of the basic evidence of the Qur’an and Sunnah on the subject. It seeks to depict, in particular, the Qur’anic outlook in universal justice which reaches beyond the particularities of any rigid framework that might restrain the humanitarian call and substance of justice in Islam.

Mohammad Hashim Kamali served as Professor of Islamic law and jurisprudence at the International Islamic University Malaysia, and also as Dean of the International Institute of Islamic Thought & Civilisation (ISTAC) from 1985-2007. He is currently the CEO of the International Institute of Advanced Islamic Studies (IAIS) Malaysia under the newly appointed Chairman of the Institute, Former Prime Minister of Malaysia, Tun Abdullah Haji Ahmad Badawi. He studied law at Kabul University and then served as Assistant Professor, and subsequently as Public Prosecutor with the Ministry of Justice, Afghanistan, 1965-1968. He completed his LL.M. in comparative law, and a PhD in Islamic and Middle Eastern law at the University of London, 1969–1976.