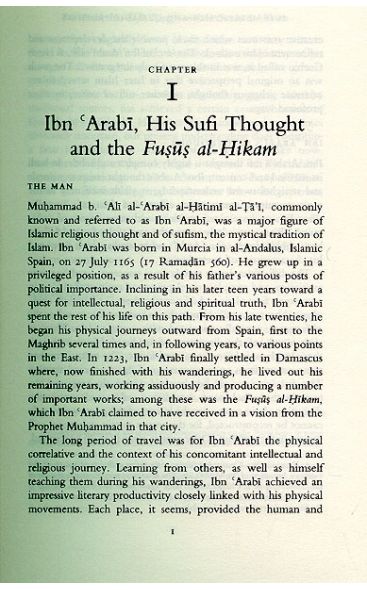 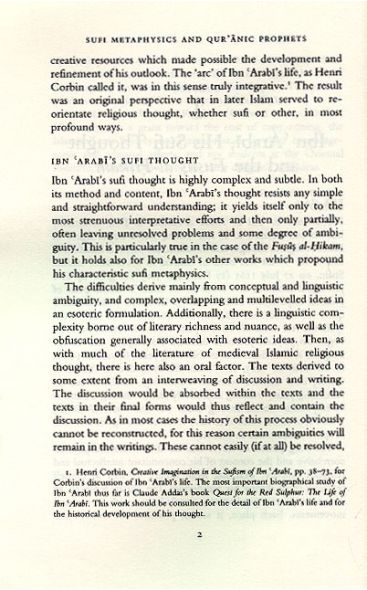 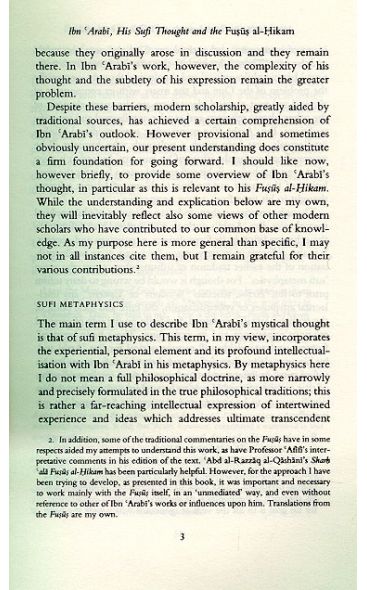 The Fusus al-Hikam is acknowledged to be a summary statement of the sufi metaphysics of the “Greatest Master”, Ibn ‘Arabi (d.1240). It is also recognised that the Fusus is a work of great complexity both in its ideas and its style.

The Fusus al-Hikam is acknowledged to be a summary statement of the  metaphysics of the “Greatest Master”, Ibn ‘Arabi (d.1240). It is also recognized that the Fusus is a work of great complexity both in its ideas and its style; and, over the centuries, numerous commentaries have been written on it. Each of the chapters of the Fusas is dedicated to a Qur’an prophet with whom a particular “wisdom” is associated. In Sufi Metaphysics and Quranic Prophets: Ibn’ Arabi’s Thought and Method in the Fusus al-Hikam, Ronald Nettler examines ten chapters from the Fusus which exemplify the ideas,  and perspective of the entire work. Concentrating on a detailed analysis of the text, the author brings out the profound connection and integration of scripture and metaphysics in the world-view of Ibn Arabi. Sufi Metaphysics and Qur’anic Prophets serves not only as an explication of Ibn Arabi’s thought in the Fusus but is also a great aid in the overall understanding of Ibn Arabi’s thought.

Excerpt from the Book:

The Man
Muhammad b. 'Ali al-'Arabi al-Hatimi -i, commonly known and referred to as Ibn 'Arabi, was a major figure of Islamic religious thought and of , the mystical tradition of Islam. Ibn 'Arabi was born in Murcia in al-Andalus, Islamic Spain, on 27 July 1165 (17 Ramadan 560). He grew up in a privileged position, as a result of his father's various posts of political importance. Inclining in his later teen years toward a quest for intellectual, religious and spiritual truth, Ibn 'Arabi spent the rest of his life on this path. From his late twenties, he began his physical journeys outward from Spain, first to the Maghrib several times and, in following years, to various points in the East. In 1223, Ibn 'Arabi finally settled in Damascus where now finished with his wanderings, he lived out his remaining years, working assiduously and producing a number of important works; among these was the Fusus al-Hikam, which Ibn 'Arabi claimed to have received in a vision from the Prophet Muhammad in that city.

The long period of travel was for Ibn 'Arabi the physical correlative and the context of his concomitant intellectual and religious journey. Learning from others, as well as himself teaching them during his wanderings, Ibn 'Arabi achieved an impressive literary productivity closely linked with his physical movements. Each place, it seems, provided the human and creative resources which made possible the development and refinement of his outlook. The 'arc' of Ibn 'Arabi's life, as Henri Corbin called it, was in this sense truly integrative. The result was an original perspective that in later Islam served to reorientate religious thought, whether  or other, in most profound ways.

Ibn 'Arabi's Sufi Thought
Ibn 'Arabi’s  thought is highly complex and subtle. In both its method and content, Ibn 'Arabi's thought resists any simple and straightforward understanding; it yields itself only to the most strenuous interpretative efforts and then only partially, often leaving unresolved problems and some degree of ambiguity. This is particularly true in the case of the Fusus al-Hikam, but it holds also for Ibn 'Arabi's other works which propound his characteristic  metaphysics.
The difficulties derive mainly from conceptual and linguistic ambiguity and complex, overlapping and multilevelled ideas in an esoteric formulation. Additionally, there is a linguistic complexity borne out of literary richness and nuance, as well as the obfuscation generally associated with esoteric ideas. Then, as with much of the literature of medieval Islamic religious thought, there is here also an oral factor. The texts derived to some extent from an interweaving of discussion and writing. The discussion would be absorbed within the texts and the texts in their final forms would thus reflect and contain the discussion. As in most cases the history of this process obviously cannot be reconstructed, for this reason, certain ambiguities will remain in the writings. These cannot easily (if at all) be resolved because they originally arose in discussion and they remain there. In Ibn 'Arabi's work, however, the complexity of his thought and the subtlety of his expression remain the greater problem.

Despite these barriers, modern scholarship, greatly aided by traditional sources, has achieved a certain comprehension of Ibn 'Arabi's outlook. However provisional and sometimes obviously uncertain, our present understanding does constitute a firm foundation for going forward. I should like now, however briefly, to provide some overview of Ibn 'Arabi's thought, in particular as this is relevant to his Fusus al-Hikam. While the understanding and explication below are my own, they will inevitably reflect also some views of other modern scholars who have contributed to our common base of knowledge. As my purpose here is more general than specific, I may not in all instances cite them, but I remain grateful for their various contributions.

Sufi Metaphysics
The main term I use to describe Ibn 'Arabi's mystical thought is that of  metaphysics. This term, in my view, incorporates the experiential, personal element and its profound intellectualization with Ibn 'Arabi in his metaphysics. By metaphysics here I do not mean a full philosophical doctrine, as more narrowly and precisely formulated in the true philosophical traditions; this is rather a far-reaching intellectual expression of intertwined experience and ideas which addresses ultimate transcendent issues of cosmogony and cosmology, God and man, this world and the next. There is here much that may be drawn from traditional Islamic philosophical and theological thought—especially the problem of the One and the many with its components of classical and post-classical ideas; there are also many elements of the other Islamic religious and secular, intellectual and scientific traditions. Ibn 'Arabi, like many other great medieval Muslim intellectuals, was very much a polymath who brought all he possessed to bear on the issues of his concern. Indeed, it is quite clear even that he saw in his  metaphysics a basis for the resolution of the major outstanding problems of Islamic religious thought in his time from a new perspective.

Though sometimes, then, redolent of aspects of philosophical metaphysics, Ibn 'Arabi's outlook goes beyond and differs from the other tradition in its formulations, expressions, and content. It is also different in its very reason for being, as an  of the earlier tradition of sufism—thus, again, the name ' metaphysics'. For though it would be wrong to deny  prior to Ibn 'Arabi, whether 'Western' or 'Eastern', any intellectual attributes or systematization, the core and focal point of the tradition usually remained decidedly on the side of personal religious experience and its expression. These basic 'mystical' features understandably still remain critical for Ibn 'Arabi and, by his own claim, they define and direct his  career; but his  must in great part be understood as an intellectualisation of that prior tradition, if it is to be understood at all, and if its significance is to be appreciated. Annemarie Schimmel has put it well:

But whatever the Spanish-born mystic who soon became known as ash-shaikh al- (Magister Magnus) might have intended, there is a world of difference between his approach to religion and the dynamic, personal religion of Hallaj. With Ibn 'Arabi, Islamic mysticism comes close to the mysticism of infinity, and his approach is theosophical or gnostic rather than voluntaristic, for his goal is to lift the veils of ignorance which hide the basic identity of man and the Divine, while in early Sufism the element of personal love between man and God was predominant.

Ibn 'Arabi's Sufi metaphysics is vast and vastly complex. Its main ideas, style, and method, as said above, render it difficult to penetrate. A focused survey of the main ideas, as these are formulated and appear especially in the Fusus, will give more substance to this general characterization of the metaphysics; it will also provide a necessary conceptual background for the  analyses of the Fusus made in the following chapters. Preliminary to this survey, let us briefly consider Ibn 'Arabi's own view of the origin of the Fusus.